By Diana Ransom January 19, 2012
Opinions expressed by Entrepreneur contributors are their own. 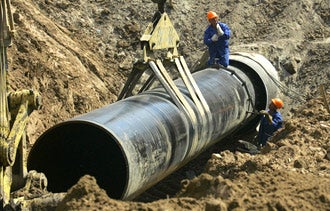 Oil and gas giants aren't the only companies that are unhappy with President Obama's decision to block the Keystone XL Pipeline. A number of small business owners who were counting on the project getting a green light are crying foul.

President Obama yesterday moved to reject a permit to build the Keystone XL Pipeline, a pipeline system that would bisect the U.S. and allow for the transport of crude oil from Western Canada to multiple locations in the U.S. Some estimate that the project would have created tens of thousands of jobs and a helpful boost to the U.S. economy, but the President -- acting on the State Department's recommendation -- ruled that the project was not in the country's "national interest."

Dale Mykyte, the CEO of Pe Ben USA, a pipeline building company in Houston, says the project will hit his company hard. "We are talking in excess of $30 million in revenue," he says. "We had anticipated putting approximately 150 to 200 people to work on this project who will now not be required," Mykyte says. He added that Pe Ben USA also plans curtail purchases and sell off surplus equipment that would have been used for the project.

Mykyte isn't the only small-business owner anticipating a blow. "The pipeline was supported by small business because it would have provided additional energy supplies and helped to create needed jobs in the area where the pipeline was to be constructed," Susan Eckerly, the National Federation of Independent Business's senior vice president of public policy, said in a statement.

But the number of North American business owners affected is hard to judge. Small businesses would have been required to bid for a subcontract with TransCanada -- the Alberta-based company leading the project -- or state governments. But since the project didn't go through, "there weren't any confirmed small businesses just yet," says Rep. Sam Graves' (R., Mo.) communications director Darrell Jordan.

Still, Graves, who is the chair of the House Small Business Committee, added in a statement that the impact will surely be felt in the small-business community. "I am completely bewildered at why this administration has decided to reject a true shovel-ready project that will create 20,000 direct jobs and about 118,000 spin-off jobs, many of them through small businesses." In terms of economic impact, a 2010 report from the Perryman Group based in Waco, Texas, estimated that construction of the Keystone XL Pipeline project would have a more than $20 billion impact on the U.S. economy.

The President blamed the project's rejection on a lack of time to assess its impact on Americans and the environment. In its two-month extension of the payroll-tax holiday, Congress gave the President just 60 days to review the project and decide if it was in the nation's national interest. An earlier deadline had been set for 2013. "As a result, the secretary of state has recommended that the application be denied. And after reviewing the State Department's report, I agree," Obama said in a statement yesterday.

The President left open the possibility of approving other projects including an oil pipeline from Cushing, Okla., to the Gulf of Mexico.

How much does your business count on government projects? Let us know in the comments section.