Valentine's Niche: Say It With Beer and Beef Jerky?

By Diana Ransom February 14, 2012
Opinions expressed by Entrepreneur contributors are their own.

Valentine's Day sales don't measure up to Christmas, but for some businesses, the holiday is still pretty sweet.

On average, shoppers will spend about $126 each on loved ones this year, up 8.5 percent from 2011 and the highest amount in the past decade, according to the National Retail Federation's 2012 Valentine's Day Consumer Intentions and Actions survey. Total spending in the U.S. for the holiday is expected to reach $17.6 billion this year.

Roses and chocolate-covered anything aren't likely to cede their favored status, but some entrepreneurs are taking a chance on more unorthodox gifts -- from catering to men to creating offbeat products.

Here are three unconventional Valentine's Day bouquets and a look at their marketers:

They say the fastest way to a man's heart is through his stomach, so you probably can't go too wrong with this beef-jerky bouquet from Gary West Smoked Meats. The bouquet of one dozen long-stem steak strips sells for $39 with no shipping fees. 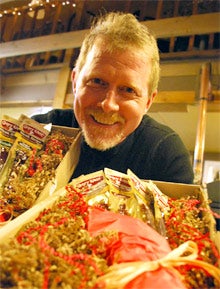 Paul Murdoch, co-owner of the meat smoker, says a "couldn't hurt" philosophy was the key ingredient to his burgeoning Valentine's Day operation. A former employee suggested the idea of making seasonal bouquets using Gary West's jerky in 2007. Though skeptical at first, Murdoch says the marketing ploy proved to be a boon for the business. Christmas still reigns supreme in seasonal sales, but Valentine's Day is a close second -- accounting for about 5 percent of annual sales, which totaled $2 million last year. "Valentine's Day has become really significant," Murdoch says. "When we introduced this jerky bouquet, I didn't think it would do nearly as well as it has."

Many people might not consider a gift of beef jerky very romantic. But the quirkiness is part of the appeal. Fox News, Cosmopolitan and other media snapped up the story, and orders surged, Murdoch says. The company's targeted use of Facebook advertising has been especially effective. After the Cosmo piece, Murdoch realized that his core customer is women in relationships with men. "We'll use Facebook primarily because you can target that demographic so accurately," he says.

OK, giving the guy or gal in your life a six-pack surely doesn't sound very special. But what if it's his or her favorite beer and it comes in a bucket that says Happy Valentine's Day with a big red heart scrawled on the side? This six-piece beer bouquet, which comes fully loaded with peanuts, a koozie and a bottle opener, is $54.99, plus shipping. 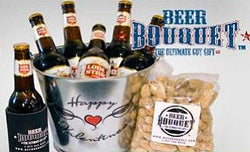 The Valentine's Day-themed beer bouquet comes with six beers, a koozie, a bag of peanuts and a bottle opener.

After working in consumer packaging and graphics, Josh Horowitz had something of an epiphany on a rooftop in New York City. Using votive candle holders and empty beer bottles, he made his first beer bouquet. After moving to Austin, Texas, in 2009, he launched Beer Bouquet, which sells football and seasonal-themed bouquets through the mail to 46 states. "It was a no brainer," Horowitz says. "Everyone has a favorite team and everyone has a favorite beer. Plus, there was no real go-to gift for guys, other than neck ties or a flask."

Last year, Valentine's Day accounted for roughly 25 percent of Beer Bouquet's sales of $75,000. Horowitz expects sales to ramp up this year, as he creates new bouquets with more snack foods like beef jerky and pretzels. He also plans a Groupon promotion for Father's Day, when he hopes to sell 5,000 bouquets. 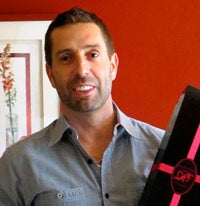 While nothing says, "I love you," like a dozen red roses, Roman Sacke wondered what receiving a dozen dying roses would say. So, he started Dirty Rotten Flowers to find out. The company sells three variations of the oh-so-tragic bouquet, starting at $25, plus shipping. The Valentine's Day bouquet called "I love you not" costs $27 and includes a tattered teddy bear holding a red heart that says, "I love you."

Sacke, who hails from the Czech Republic and now lives in Los Angeles, calls the bouquets "silly" and "fun" and says they're meant in jest. "Where I'm from people have a different sense of humor. They would like it," says Sacke. He notes that many customers send the bouquets to old bosses and ex-flames. 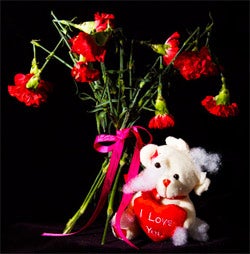 This "I love you not" bouquet comes with a tattered, unfortunate looking bear holding a heart that says "I love you."

Dirty Rotten Flowers is actually an offshoot of Sacke's more traditional floral business. Like John D. Rockefeller who found profitable uses for the byproducts of kerosene production, Sacke has found a way to make a little money from his unsold flower inventory. "In my regular flower shop, there were always so many leftovers that would just die," he says. "We began wondering what you do with them, other than composting." Sacke declined to discuss his financial results, but he did say that last year the company sold 300 to 400 rotten bouquets for Valentine's Day, which amounts to roughly $8,000 to $11,000. Not bad for dead flowers.