What the 'Buffett Rule' Means to Small-Business Owners 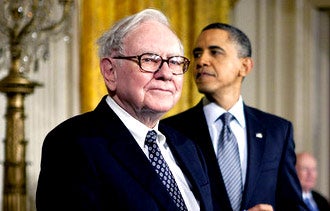 UPDATE: As expected, the Senate voted to block the Buffett Rule Monday, April 16.

The Senate is voting today on the Buffett Rule, a tax bill assailed by critics as, among other things, bad for entrepreneurs and jobs. But a closer look reveals that the measure, if passed, and that's a big if, would have little impact on the majority of small-business owners.

The Paying a Fair Share Act, commonly referred to as the Buffett Rule, is named for Warren Buffett, the chairman and CEO of investing behemoth Berkshire Hathaway, who has pointed out that he pays a lower tax rate than his secretary. The proposal is to institute a minimum tax of 30 percent on all individuals with incomes of over $1 million.

The odds of its success are slender, but the bill has received a lot of attention -- endorsed by both President Obama and Warren Buffett -- and the ideas behind it are expected to continue to get a lot of air time through the election season.

Here we examine what the proposed change would mean to you (Hint: not much) and why small businesses get thrown into the conversation so frequently.

Related: How Does a 20 Percent Tax Cut Sound? Don't Hold Your Breath

The problem with that argument is that individuals with more than $1 million in income are already paying an income tax rate of 35%. A business owner who files his or her company sales as a “flow through” onto his or her individual return pays taxes at the individual tax rates, and at more than about $380,000 in income per year, the tax rates bump up to 35%.

The people potentially taking a hit from a Buffett Rule change would be those wealthy individuals (Think Warren Buffett and Mitt Romney) who are paying the 15% tax rate on capital gains and dividend income (unearned income), says Joseph Rosenberg, research associate at the Urban-Brookings Tax Policy Center in Washington, D.C.

Some still say the Buffett Rule will handicap small-business owners. For example, the International Franchise Association President and CEO Steve Caldeira says the Buffett Rule would impact franchise owners who own more than one unit.

While individuals who take in more than $1 million in earned income (not capital gains or dividends) pay taxes at a 35% rate, deductions and write-offs that businesses take can generally reduce their effective tax rate, according to Jay Perron, the IFA's vice president of government relations and public policy. He says that once a business owner takes all of his eligible deductions, he or she may be paying less than 30%. By making the minimum tax rate 30%, business owners would end up paying more, and so have less to invest in their businesses to grow and create jobs, he says.

Other business organizations say the measure would hardly impact small-business owners at all. One group sent a letter to Senators in support of the bill. It cited a poll by the American Sustainable Business Council, Main Street Alliance and Small Business Majority that found that only one of the 500 small-business owners surveyed reported annual income of more than $1 million. That finding refutes the argument that small businesses would be disproportionately impacted by the Buffett Rule, the letter says.

Despite the political football, there are not substantial economic data that proves that such a change would impact entrepreneurship rates, says Paul Kedrosky, a Senior Fellow at the Kauffman Foundation, an entrepreneurship advocacy organization. The legislation provides both Democrats and Republicans an opportunity to throw darts at each other. “It allows both sides to characterize and create this cartoon-like picture of each other,” he says.