When engineer Ron Green moved to Louisiana from San Diego in the early 1990s to work on the superconducting super collider, the thing he missed most was brunch. "I spent 16 years in California, and on weekend mornings I'd travel up and down Highway 1, looking for little restaurants. I kept mental notes about what I liked and disliked about each of them," he says. "When I moved to Hammond, La., and tried to go out on weekends, all I could find were IHOPs, Denny's and Waffle Houses."

When the government scrapped the super-collider project, Green took it as sign to try something new. He bought an old summer home one block off Lake Pontchartrain in the small town of Mandeville, and in 1996 opened The Broken Egg Café, the type of friendly, slightly upmarket brunch spot he'd been yearning for. It seemed other people in the area had been looking for something similar--customers happily accepted two-hour wait times at the cafe on Saturday and Sunday mornings during its first year in business. 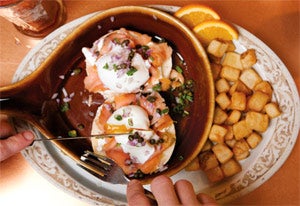 Sixteen years later, Green's original restaurant still draws weekend crowds, as do the 20 units of his franchise, dubbed Another Broken Egg Café. While Green's menu has 150 items, including burgers and sandwiches, more than half the offerings have one thing in common: Their main ingredient is the humble egg.

A decade ago, when buffet chains, fast-food outlets and family-dining franchises were expanding their menus, attempting to cater to almost every taste, a singular focus on an item such as the egg would have seemed like a stamp of doom. But now, with the success of narrowly themed concepts like the 260-plus-unit Noodles & Company and the 126-unit Raising Cane's Chicken Fingers (which offers only its namesake product, plus fries, toast and coleslaw), restaurants that do one thing--and do it well--are gaining traction.

The secret is in picking an item with enough broad appeal and versatility to anchor a menu. PB Loco, a gourmet peanut-butter sandwich chain that started franchising in 2005, got great reviews for its unique flavor combinations. The problem was, the concept didn't appeal to breakfast and dinner crowds; even for lunch, the grade-school staple felt more like an occasional novelty than a regular meal. The company started closing stores in early 2008. A small flurry of cereal-only restaurants opened and flamed out in the mid-2000s, going down for the same reasons.

Darren Tristano, executive vice president of Technomic, a restaurant research and consulting firm in Chicago, says narrowly focused restaurants need to choose their offerings wisely. "What's at the center of the plate? Is it substantial enough for people to think of as a meal?" he asks. "Noodles & Company broadened its menu to add sandwiches; they have salads, soups, proteins and a good beverage choice. And people are comfortable having pasta at the center of the plate."

Shell Game
Green is not the only one who believes eggs have enough heft to take center stage at mealtime. Besides Another Broken Egg, other egg-focused eateries in the "better breakfast" category include First Watch, Mimi's Café and Le Peep. They've all benefited from a breakfast craze that has made morning meals the fastest-growing segment of the U.S. restaurant industry for the last five years, according to market research firm The NPD Group.

The Single Life
A few more franchises with only one thing on their minds ...

• Original SoupMan. The soup stop made famous by Seinfeld has 16 locations that serve between five and 12 varieties daily, from lobster bisque to Mexicali bean. (And yes, if you must, sandwiches are available, too.)

• Crisp. This New York and Philadelphia concept knows its falafel, serving the crispy chickpea patties in pita in more than a dozen variations, like goat cheese and red peppers or jalapeño and guacamole.

"In this economy, people still want to eat out whenever possible, but they're moving out of fine dining and into breakfast," explains Jan Barnett, director of marketing for The Egg and I, a national 55-unit franchise based in Centennial, Colo. "At breakfast, you can control the check--there are no appetizers and no alcohol. And breakfast appeals to all categories. Older customers like to come in during the week, and younger consumers like to go out and enjoy a full-service breakfast on the weekend."

Going out to breakfast also has the potential to become a daily or weekly ritual. "You see a strong frequency of repeat or regular customers," Barnett says. "Once someone decides to eat breakfast out, it becomes part of a routine. Then it becomes critical to reduce turnover and keep associates and create familiarity."

The Egg and I works hard to keep employee turnover to a minimum; at least one franchisee claims to have not put up the "help wanted" sign for seven years. Most of the egg concepts run on a single breakfast/lunch shift, usually from opening until 3 or 3:30 p.m., so they appeal to employees who want afternoons off to watch children, or to older servers who are hesitant to deal with late-night shifts and alcohol service. The schedule also satisfies franchisees and managers who don't want to staff several shifts or have to supervise from early morning to late at night. 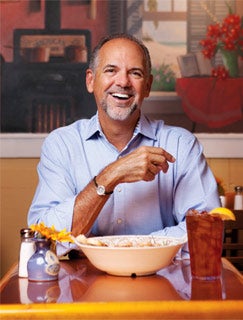 But the other element that sets these concepts apart is the egg itself--inexpensive, nutritious and the Swiss Army knife of the culinary world. "It's so versatile, you can cook it any way you want," says Another Broken Egg's Green (who prefers poached). "You can put it in a salad, use it as a binding agent for sweet stuff. It pairs well with seafood. It has essential amino acids, about 70 calories and all kinds of vitamins--everything you need to round out a healthy diet."

The other reason the breakfast theme is taking off is that the competition is not against other restaurants, but rather the cereal aisle. "The home is our No. 1 competitor," Barnett says. "People typically eat at home for that morning daypart, and the more competitors that are marketing and getting people to dine outside for breakfast, the better. It raises all boats."

Pete Nowak of Columbus, Ohio, is another egg-ophile. He's hoping for round-the-clock demand for his concept, Eggfast, which will begin expanding throughout Ohio this year, offering a 24-hour quick-serve version of breakfast, including delivery. "Late-night delivery is saturated with pizza and wings, so we're definitely popular at night," he says. "But we're just as popular at 9 a.m. as at 3 a.m. And a surprising number of people come here for dinner, too."

Hot Concept
The other darlings of the franchise world are restaurants specializing in grilled cheese sandwiches; those eateries began popping up across the country in the last half decade. But while the better breakfast concepts have proved themselves, it remains to be seen whether consumers will be satisfied with grilled cheese at the center of their plates.

Among the players in this space are Grilled Cheese & Co., with four locations in Maryland; Chedd's, with three units in South Dakota, Texas and Wisconsin; and San Francisco-based chain The Melt, founded by Flip camera creator Jonathan Kaplan. All are focused on elevating the comfort-food staple to gourmet levels, using international cheeses, artisanal breads and add-ons such as wild mushrooms or black beans.

But Technomic's Tristano wonders if it's enough. "We've done some research on grilled cheese, and our position is that it's probably too narrow," he says. "It's a great product, but maybe not enough to sustain an entire concept itself. Even with soup, salad and a protein, it might not be substantial enough for dinner."

His other caveat is that even if the public does go crazy for grilled cheese, it is a product easily co-opted by established restaurants such as Panera Bread or even McDonald's.

Michael Inwald strongly disagrees. His company, Cheeseboy, which has eight locations in five Northeastern states, is set to begin franchising in earnest later this year. Instead of gourmet offerings, Inwald focuses on a solid sandwich with familiar additions like bacon, turkey, ham, pepperoni or veggies. "We don't offer brie and apricot vinaigrette, but it's not Wonder bread and American cheese either. We offer premium mainstream options, like cheddar, provolone, basil and tomatoes," he says. "We're trying not to be pretentious. We're open to everyone."

While admitting that lunch is Cheeseboy's biggest meal, Inwald cites the popularity of breakfast grilled cheese with bacon and eggs. "We do a great business throughout the day," he says. "We are a great snack product, and if you want that, a regular grilled cheese is perfect. But if you want a full meal, just add turkey, spinach and tomato; a cup of soup; potato chips; and a drink. We are really a round-the-clock concept."

But what if the buzz around breakfast fades, or grilled cheese just doesn't satisfy for dinner? Many of these franchises say they aren't keen to expand their menus; instead, they have faith that their core concepts have enough flexibility to change with evolving tastes. "Instead of diluting our brand by offering everything, we want to concentrate on the one thing we do well, and do it better than everyone else," says Eggfast's Nowak, who points out that the potential for innovation is huge.

"There is such a wide variety of breakfast-related items we offer," Nowak says, citing migas (a traditional Mexican scramble); flatbread with pico de gallo salsa; and hash-brown casserole. "There are lots of daypart items that are not so far outside the breakfast theme that we can experiment with. But we aren't interested in burgers, wings and pizza."

While Green's Another Broken Egg does offer sandwiches and burgers, he's not interested in making them the centerpiece of his menu. "The majority of people coming in for lunch still order egg items," he says. "We're always trying to come up with new recipes. Our tag line is 'Inspiring Eggs to Excellence.' And we're always looking for ways to do that."