By Matt Villano July 6, 2012
Opinions expressed by Entrepreneur contributors are their own.

"All young entrepreneurs know that time is money, which makes the time we spend at industry networking events almost as precious as the funding for which we’re all gunning. How can you maximize the benefits of attending these soirees? Here’s what real-life treps -- as well as some networking event experts -- have to say:

Have an agenda.
Not all networking events are created equal. It behooves you to research the best of the bunch in your area and decide which might be best for your overall start-up goals. What is your objective for the event? Are you looking to find a cofounder? Are you looking to meet investors? Are you simply looking to get more educated or inspired? Asking yourself simple questions like these before selecting a networking event can help refine your search -- and, in turn, get more out of your selections.

Nathan Beckord, principal and startup advisor at the San Francisco-based consulting firm VentureArchetypes, will scan the guest list of networking events he attends to identify people in the crowd he wants to meet. "I also will familiarize myself with the speakers -- not only who they are, but what they look like," he says. "That way, if they are hanging out before their chat, I can go up and meet them, whereas if I want until after they speak, they are often swarmed by a mob."

Fly solo.
We all feel more comfortable attending work functions with a "buddy," someone with whom we can seek refuge when the constant meeting-and-greeting gets old. But Priyanka Sharma, marketing director for iSwifter, a Menlo Park, Calif., startup that makes a Flash web-browser app for the iPad, suggests reconsidering. "When you’re solo, you’re forced to talk to people, it's easier to insert yourself into conversations, and you're less intimidating to mingle with," she says. 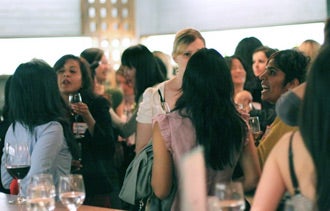 Don’t be shy about taking notes at networking events like Sepideh Nasiri’s Founder Friday, and definitely follow up.

Work the room.
Consider the law of averages -- the more people you meet at one of these events, the greater the likelihood of making networking magic. Sepideh Nasiri, a director of off-line activities at Women 2.0, a San Francisco-based networking organization for women, suggests that entrepreneurs spend no more than 5 to 7 minutes per conversation. "You shouldn’t need any more time to figure out exactly what the person in front for you is looking for," she says.

Take notes.
It’s impossible to remember specifics on every person you meet at these shindigs, so don’t be afraid to take notes. According to Azam Khan, a social-commerce and marketing entrepreneur in Fremont, Calif., the easiest place to jot stuff down is on the back of someone’s business card. Use keywords to help you contextualize a person’s strengths when you get home and sort through your stuff.

Khan notes that this philosophy works both ways. "Give a card but don’t dwell on it," he says, "and let them write notes, too." Another option here is to use your Smartphone (or bring along a small steno pad) for more detailed scribbles -- though (so as not to make anyone nervous) it’s best to do this in the privacy of a corner or the rest room.

Watch what you drink.
Sure, alcohol makes it easier for all of us to meet new people. And, yes, beer and wine (and sometimes cocktails) are standard at most of these networking events. Still, moderation should rule the day. "If you need a drink to loosen up a bit, that’s probably fine. Anything more could lead to trouble," notes Nasiri, whose Founder Friday events draw up to 500 people per month in more than 10 cities around the world. "The last thing you want is to wake up the next morning and wonder, 'What did I say?'"

Follow up.
The most important step in making new acquaintances is following up. Tweet, email, Facebook -- whatever -- just close the loop. Sharma, the marketing guru at iSwifter, says that in addition to following up with fellow attendees, you always should follow up with the hosts of the event, too. "It’s a good way to get an invite to future and similar events," she says, noting that organizers frequently have large networks and can connect you with others easily. Hey, you never know.

What helps you make the most of networking events? Leave a comment and let us know.