Chick-fil-A in Gay-Rights Fracas as Supporters Line Up 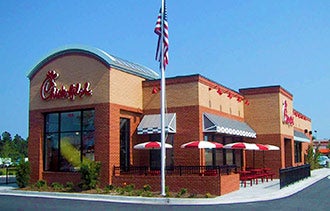 Chick-fil-A may wish to stick to its chicken sandwiches and forget the uproar over its leader’s recent anti-gay-marriage comments.

Public response has been strong to Cathy’s comments in support of the “biblical definition” of marriage as a one-woman, one-man institution. Gay-rights proponents have staged protests against the chain and politicians in several places have declared that Chick-fil-A isn’t welcome to open another of its roughly 1,600 franchises in their cities. Washington, D.C.’s mayor referred to the chain’s product as “hate chicken.”

Some of those who agree with Cathy, however, are literally lining up to show support. Several have tweeted photos today showing long lines at their local Chick-fil-A franchises, or simply tweeted their encouragement.

Someone called @waff48 tweeted a photo of a line of cars near one Chick-fil-A, saying it seemed longer than usual, and Bret Baier of Fox News Channel tweeted a picture of what appeared to be a jammed location in Louisville.

It’s unclear whether all those people are showing support for Cathy’s traditional-marriage position, or simply aren’t going to let it stand in the way of their cravings even if they support gay-marriage rights; it’s not unusual to see a crowd at a Chick-fil-A.

And for all those pro-Chick-fil-A tweets, there were plenty of angry and satirical jabs from the other camp.

YouGov's BrandIndex reported last week that fast-food eaters in most U.S. regions had a lower perception of the company since Cathy's remarks were published earlier in the month. The publication said Chick-fil-A had dipped below the average fast-food consumer perception of the top quick-service restaurant chains for the first time.

“Chick-fil-A Appreciation Day was not created by Chick-fil-A. We appreciate all of our customers and are glad to serve them at any time. Our goal is simple: to provide great food, genuine hospitality and to have a positive influence on all who come into contact with Chick-fil-A,” Steve Robinson, executive vice president for marketing, said in a statement today.

On Tuesday, Robinson issued a statement noting the Cathy family’s long history of applying biblically based principles to managing the business, such as closing on Sundays, operating debt-free and devoting a percentage of profits back to Chick-fil-A’s communities. He continued:

“The Chick-fil-A culture and service tradition in our restaurants is to treat every person with honor, dignity and respect -- regardless of their belief, race, creed, sexual orientation or gender. We will continue this tradition in the over 1,600 restaurants run by independent owner/operators. Going forward, our intent is to leave the policy debate over same-sex marriage to the government and political arena.”

Related: Inside the Mind of Go Daddy's Controversial Founder

Meanwhile, the brouhaha has touched some of the country’s most beloved children’s characters. The Jim Henson Co., which supplied meal toys to the chain, has tried to distance itself from Cathy's position, saying it would not work with the company in the future. Chick-fil-A reportedly started using Berenstain Bear books instead.

The Berenstain Bears posted a note on their site saying the book campaign had been in development for over a year and that the Berenstain family had been unaware of the controversy until last week and has no control over the promotion; they asked those concerned to direct their comments to publisher HarperCollins and Chick-fil-A.

Readers, what do you think of the Chick-fil-A controversy? Should a business leader keep quiet when it comes to political views?