Eventbrite: $1 Billion in Tickets and Counting

The darkest hour for Kevin Hartz came, as it did for many entrepreneurs, amid the U.S. financial crisis in 2008. "It was a gut-wrenching time," recalls Hartz, co-founder of Eventbrite, a six-year-old event organization and ticketing platform. This bleak period would lead to the first of many bright spots for his company -- now an ecommerce juggernaut in the ticketing industry.

In the past year, Eventbrite issued its 50 millionth ticket and helped people in more than 175 countries to organize and join events of all kinds, from cooking classes to business conferences. Anyone can use the platform to create and promote an event within minutes. Its founders describe Eventbrite as a discovery engine for interesting events.

"We've always looked at ticketing as big sports and big concerts," Hartz says, referring to both consumers and ticketing companies. "But a ticket can be a ticket to a class, or a fundraiser, or a political rally. We see it as a category-based ecommerce company much like an eBay or an Amazon."

To date, Eventbrite has raised more than $78 million of venture capital from Tiger Global, Sequoia Capital and others.

Related: 5 Ways to Turn Your Website Into a Sales Machine

But back in 2008, when an institutional funding round fell through, the company was scrambling for cash. Afraid of falling too far into a financial hole, Hartz and his co-founders sunk more of their own money into the business and went back to investors such as Michael Birch, the co-founder of social network Bebo, for additional capital.

"We put this money together and held our breath for 2009," says Hartz, who serves as CEO. The other two co-founders are his wife Julia, who is company president, and Renaud Visage, the company's chief technology officer.

Despite thedownturn in the economy, the trio remained confident that there was a mass market for their service. Their determination paid off. In June, Eventbrite surpassed $1 billion in total ticket sales since its founding, with a projected $600 million in tickets in 2012 alone. In exchange for its service, the company takes 2.5 percent of total ticket sales plus $0.99 for each ticket. Integration with Facebook, Twitter and LinkedIn makes it easy to share notices of events, and the Eventbrite mobile application allows organizers to scan tickets with their cell phones. 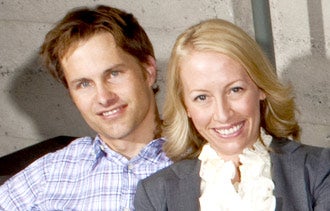 "We're very much focused on the opportunity that Ticketmaster is not focused on," says Tamara Mendelsohn, Eventbrite's vice president of marketing, referring to an established competitor that sells tickets for large events.

The average size of the events created through Eventbrite is modest, about 40 attendees. However, some events are larger, such as the Vans Warped Tour, a traveling music and extreme-sports festival for which the company exclusively handled the tickets for five stops this year.

"History is on our side," Kevin Hartz says. "Incumbents aren't able to turn the corner and win in these new markets, as you can see from Blockbuster or the bookstores like Borders, all this wreckage of traditional businesses amid the disruption of technological change."

Related: How InstaEDU Is Tapping the Online Education Market

But it was Eventbrite's commitment to customer service that impressed Alex Kay, the founder of Unicorn Meat, a New York-based nightlife production group, when he used the company to handle tickets for his events. On one occasion, a company error led to delayed payment for an event at a time when Kay found himself between apartments and short on cash. Eventbrite offered to make amends by providing him with a hotel room, temporary storage space for his belongings and a moving company. Although Kay didn't take the company up on its offer, the gesture left a lasting impression.

"Ticketing is typically a shark industry, where anyone will promise anything they possibly can to get you to sign a contract," says Kay. "Eventbrite is an ethical player."

The company is poised for growth. Eventbrite's London office -- its first outside the U.S. -- represents the headquarters of a coming European expansion. Already there are native-language versions of the site for 14 countries, including Spain, Germany and France.

"We think about how we can punch above our weight class," Kevin Hartz says, "how we become the biggest ticketing company in the world." One way is to tap into the zeitgeist, selling tickets for the latest trend. In 2011, one of the largest growth categories on Eventbrite was bacon-themed events.

"Because we built a technology platform that anyone can use, you begin to see these really cool sociological trends emerge," says Mendelsohn.

Current trends include outdoor adventure runs such as Tough Mudder and electronic-music dance raves. In July, Eventbrite formed a partnership with Disco Donnie Presents, the event production company founded by Donnie Estopinal, a popular party promoter in the music industry. Estinopal's company produces more than 1,000 electronic-dance music events each year, all of which are now ticketed through Eventbrite.

Related: How Silicon Valley's Glow Shines Beyond Its Borders