By Michelle Goodman March 6, 2013
This story appears in the February 2013 issue of Entrepreneur. Subscribe »

On a trip to Africa in 1990, Peter Scott was moved to tears by the deforestation he encountered. Determined to do something, he spent 15 years as a consultant for governments and NGOs in the developing world, designing fuel-efficient cooking technologies that didn't rely on wood. Through his work he taught people in 20 countries to build and sell more than 400,000 clean stoves, bread ovens and food dryers. 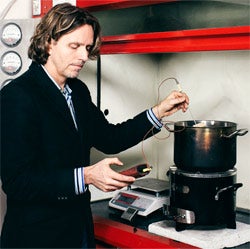 Still, Scott knew he could do more. In 2010 he formed Vashon Island, Wash.-based Burn Design Lab, a nonprofit organization that creates sustainable stoves for developing countries to build and distribute. The following year he founded Burn Manufacturing, the for-profit arm that licenses the Lab's designs to build and sell stoves in Africa. Scott scored a $1 million loan from a Fortune 10 corporation for Burn Manufacturing; now he's working on securing a $3 million loan from the U.S. government's Overseas Private Investment Corporation and trying to raise an additional $2 million in equity funding.