By Carolyn Whelan March 18, 2013
Opinions expressed by Entrepreneur contributors are their own.

The problem stems from investors and developers speaking different languages, says Charania, a mathematician who founded software developer Decipher Labs, and Montoya, a former McKinsey consultant, economist and founder of mobile marketing strategy firm Rokk3r Mobile. Too often, investors misunderstand the technology required to generate revenue, while developers misjudge the cost and time of scaling up. As a result, promising products miss their market due to capital, technology or talent gaps.

So, the duo brainstormed a better way to speed up the time to market. Rokk3r Labs, a hybrid investor-accelerator, was their answer. And Miami's nascent start-up scene and their ties to untapped Latin America served as fertile testing ground.

Charania and Montoya merged their companies in March 2012 into a new business that takes a quant-based approach to project selection. It calculates costs, time-to-market and sales forecasts for seed-to-late-stage ventures. This filter helps Rokk3r Labs choose projects it will in invest in and do technology work for. The company accepts only projects that can be launched in four months.

Related: What to Look for in an Accelerator Program

"Building technology and a business model in parallel helps Rokk3r Labs do in four months what those with just a business plan do in a year," says Faquiry Diaz Cala, CEO of Miami-based private investment group Tres Mares, who is unconnected to the company but aware of its movements in Miami's small but growing venture environment. "They're great coders with a strong business sense."

A year later Rokk3r Labs boasts operating profitability after $1.5 million in sales, a Colombian subsidiary, a $20 million investment portfolio, 25 employees, and the launch of four of Rokk3r Labs' 13 projects -- 25 percent of which previously won pitch contests, received angel funding or graduated from an accelerator. Next up: expansion in Brazil, Africa and Europe by replicating the company's quant-based approach and structure through a quasi-franchisee model.

The company's launched products include LiveNinja, a pay-per-minute Web video instruction site, and Ad Avengers, an app measuring ad performance in real time across social networks and other sites.

Here's how Rokk3r Labs' business model works: A developer, designer and business team calculate the cost and time for strategy development, product design, staffing up and technology tweaks, plus market size and price values. If things add up and a management team passes muster, Rokk3r Labs accepts work through sliding scale fees and equity stakes. The company also earns licensing fees from sales linked to work it does for ad agency DDB, as its innovation lab – a wise move for recurring revenue. "They don't take on pipedream products," Diaz Cala says. "They test the market at minimal cost and move on."

Like most new ventures, Rokk3r Labs has faced its share of challenges. Although it's starting to change, Miami lacks a startup ecosystem. It was also challenging to find talent and keep a fun-but-fast execution culture as Rokk3r grew from five to 25 employees. And as projects scale up, the company may face funding obstacles in Miami. "Can they find funding when opportunities grow?" asks Mahendra Ramsinghani, managing director of Detroit-based First Step Fund and author of The Business of Venture Capital (Wiley, October 2011). "Capital tends to aggregate around Silicon Valley and other regions."

To maintain a sustainable execution pace, the company offers perks that include free South Beach housing for new recruits, weekly soccer, yoga, meditation and movie nights--and the freedom to launch one's own project in house. "Harvard and MIT grads are on our team from Europe, Latin America and Canada to drive new product launches, and for the lifestyle," Charania says. 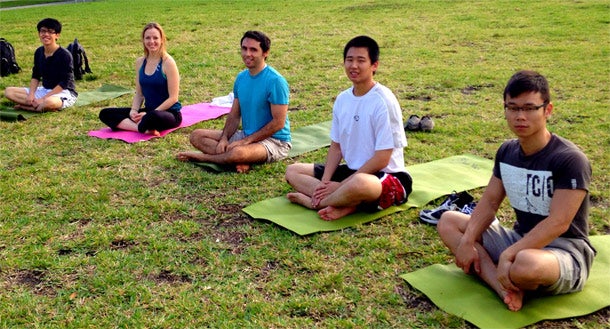 Rokk3r Labs offers perks such as yoga, meditation, free South Beach housing for new recruits and more, in an effort to keep the team in top form to execute on its initiatives.
Photo courtesy of Rokk3r Labs

Rokk3r made a serendipitous discovery in its talent search. Frustrated by $20,000 headhunter fees for sub-par people, the team created an algorithm for matching job vacancies with candidates through social media. "We knew there was a more intelligent, sticky way," Charania says. Crowdbounty crawls across sites seeking names of people in similar professions ideally suited to make recommendations. If their suggestions lead to a job placement, a bounty provided by the talent seeker is split among the referee, Crowdbounty, and in some cases, the recruit to validate the placement. Employers follow successful repeat recommenders on Crowdbounty, which was launched at a Harvard job fair in February and featured at last year's Cannes creativity festival.

On the firm's radar screen? Africa, where mobile computing opportunities abound; Sao Paolo, Brazil; and London, as a European gateway. "We want to replicate our structure and culture in areas where the middle class is exploding," Nairobi-born Charania explains. "Partners will have equity in the offshoot and find entrepreneurs and ideas from accelerators."