A few years ago, Alon Mor, a former district manager and director of special projects for Panera Bread, had a lot on his mind. He'd been thinking about the food he ate while growing up in Israel, and wished there were a clean, quick place like Panera to share those flavors with his young children. At the same time, he was blown away by the rise of fast-casual franchises and chains. "Denver, where I'm from, is the fast-casual mecca," he says. "Chipotle, Noodles, Qdoba and Einstein Bros. all came out of this area."

It all clicked on a visit to a Whole Foods Market. "You used to walk down the aisle and see maybe one brand of hummus and one type of pita bread," he remembers. "But one day I realized there were all these different kinds of hummus on the shelf. I figured, something's going on here." 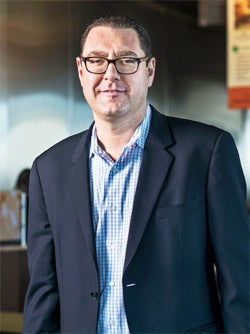 There was--and still is. In 2008 Mor launched the fast-casual franchise Garbanzo Mediterranean Grill; by the end of this year he expects to have 37 locations in six states. But Mor is not the only businessperson hoping to take Mediterranean mainstream. In recent years, numerous concepts have sprouted up, creating a za'atar-flavored franchising boomlet that is quickly gaining momentum.

So why has Mediterranean food become so popular? Middle Eastern restaurants and gyro stands have been culinary staples for decades, but unlike Mexican or Italian food, they've never really made it to the American mainstream. In the last decade, however, everyone from the American Heart Association to Dr. Oz has lauded the Mediterranean diet--full of olive oil, whole grains, lean proteins, tomatoes, vegetables and spices like cardamom, mint and sumac--as the most healthful way to eat. Add to that a generation of more adventurous palates and the rise of fast-casual, which emphasizes the fresh veggies and sauces that are the backbone of the Mediterranean diet, and the market was ripe for Garbanzo and its competitors.

"Mediterranean is kind of a next-step type of cuisine," says Mary Chapman, director of product innovation at Chicago-based restaurant research firm Technomic. "You can say to people, 'If you like Italian, maybe you'll like Greek. If you like that, you might like Middle Eastern. Your mom and dad might not try it, but your brothers and sisters will.' And with the fast-casual format the customer gets to pick, so they can choose safe, familiar and delicious ingredients like tomatoes and cucumbers, and next time try a different sauce or topping." 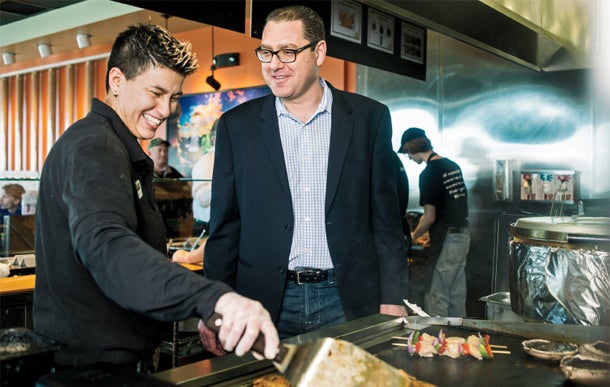 Of course, as with everything that comes to the U.S., we have to put our own spin on things. The concepts are full of variation, from authentic Mediterranean classics to restaurants whose menus pay homage to their Stateside locations.

Mor likes to think of Garbanzo as a bona fide representation of his homeland. "Everything we do is 100 percent authentic," he says, pointing to popular dishes like chicken shawarma and a soup of lemon chicken and orzo. "Nothing has changed. We haven't Americanized it at all. Lots of Middle Easterners come in and say this is exactly like in [their] country."

On the opposite end of the spectrum is Daphne's California Greek. The company was bought out of bankruptcy in 2010 by a group headed by CEO Bill Trefethen, who remodeled and added some California sun to the menu. "We took the classic Greek menu and extended it," explains CFO and COO Shannon Bane. "It's California fusion--we added avocados, pine nuts, corn, Gorgonzola vinaigrette and other local flavors to the Greek staples."

Bob, Meet Kebab
A few Mediterranean staples that may be unfamiliar to Americans

Dolmas: Vegetables or grape leaves stuffed with rice or meat and herbs.

Falafel: A deep-fried patty or ball of garbanzo or fava beans, often served in pita or laffa with vegetables and tahini.

Shawarma: Seasoned meat--typically lamb or chicken--slow-roasted on a vertical spit. (A gyro is a Greek version of shawarma.) Usually served in laffa with toppings like cucumber, tomato and tzatziki or tahini.

Tabbouleh (or tabouli): A salad made of bulgar wheat, mint, tomatoes, garlic, onions, parsley, olive oil and lemon juice. Can be served on its own or as a condiment.

Tahini: A paste made from ground sesame seeds.

Those avocados aren't just gratuitous. Bane says the California twist provides an entree for consumers who may not be familiar with the Mediterranean palate. "California fusion helps attract new customers," he says. "Market studies have shown that if there are four people from an office going out to lunch and one of them objects to Greek food, they will all go somewhere else. Our menu brings those people in. It's not just stereotypical gyros and kebabs. It gets people in and educates them and builds brand awareness."

Zoës Kitchen, headquartered in Plano, Texas, is another Mediterranean concept with its own viewpoint. Zoe Cassimus, the daughter of a Greek immigrant, is also a proud Alabamian. So when she started a small Mediterranean deli in 1995, she couldn't help but throw in some local color. Her son John began expanding the concept, and they recently adopted the tagline "Born in the Mediterranean, raised in the South." While the menu is primarily Greek, they do have Southern staples like pimento cheese sandwiches and chicken salad.

Even after 18 years in business, though, there's plenty of room for innovation and more flavors to introduce to the U.S. "There are about 20 countries that surround the Mediterranean," says Zoës vice president of marketing Rachel Phillips-Luther. "There's so much yet to be explored and tapped into. Our culinary director has investigated lots of new items for this year, and all of them are really reaching outside of Greece and Italy. We're taking a look at other countries in the region, especially the way they're preparing lean proteins."

Bill Post co-founded Roti Mediterranean Grill, his Chicago-based chain, six years ago. "There have been lots of studies conducted on the Mediterranean diet over the last two decades," he explains, "and they've looked at hundreds of thousands if not millions of people. They've proved the diet is truly the healthiest we have on the planet--it reduces heart attacks, strokes and even Alzheimer's."

Inspired by a mom-and-pop restaurant in Miami Beach that served superb "fresh Med," Post, the former president of Levy Restaurants, saw a gaping hole in the fast-casual market. "We saw a wide-open window of opportunity," he says. "The space we're in was filled with sandwiches, pizza, burgers and Mexican food. We knew the world was seeking more spice and more nutrition, and this just falls in the right place. And more important, nobody else was doing this."

Roti has 17 company-owned locations in Chicago, New York and Washington, D.C. (and no plans to franchise). Like most Mediterranean chains, it prides itself on freshness: No ingredients come from cans, very little is frozen, and produce is delivered daily. Even the shawarma--the giant cone of meat cooked on a vertical rotisserie, which gives the concept its name--is built fresh every morning, whereas most gyro places buy their shawarma as frozen blocks of meat.

So far, Mediterranean concepts are as diverse as the region they represent, and each one seems to have a niche that differentiates it. Maoz Vegetarian, a franchise from the Netherlands with locations in six states, specializes in falafel sandwiches. Nanoosh, a concept with locations in New York and Berlin, imports organic chickpeas from Turkey to make its signature hummus, which appears in many dishes (hence its former name, Nanoosh Mediterranean Hummus Bar). Manny's Neighborhood Grille, a bar-and-grill concept based in Charleston, S.C., serves mainly Greek food, along with pizza and pasta.

"I think in this category, everyone will be successful," says Garbanzo's Mor. "I think there's room for everybody to play in. This country has 300 million people, and they all like to eat. Everyone will find a niche. Look how many Mexican restaurants there are besides Chipotle, and everybody does well."

Moreover, Mor believes the diversity of concepts will not only educate customers, but also will help the market overall. "People will walk into Daphne's and try their hummus. Next time they're in my store, they will know what it is," he says. "Solid operators that give good customer service will grow. The ones that don't, won't."

Bane of Daphne's agrees that customer education is key to the long-term success of Mediterranean concepts. "Everyone knows what they're going to get when they order a taco or enchilada," he says. "They've been educated about that for a long time. When they learn about Mediterranean flavor profiles from other restaurants or even the Food Network, it helps. Consumer education is going to help us a lot."

Burger King Asks You to Buy From McDonald's