Computer engineer Vasu Kulkarni, a lifelong basketball fanatic, had no luck getting his dream job with Nike or the NBA after graduating from the University of Pennsylvania in 2008. But he knew he wanted to stay "connected to the game of basketball." He found that connection in 2009, when he launched Krossover, a company that set out to bring high-tech sports analytics to high-school and college athletics.

It's a Saturday-morning ritual for student basketball teams everywhere: gathering to watch the film from Friday night's game. While coaches may pinpoint mistakes, and players may zero in on their own failures or successes, few high-school and college athletic programs have the technology to make full use of those films the way professional teams can. 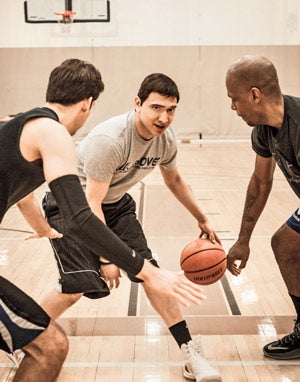 The online video and analytics platform from New York City-based Krossover bridges this technology gap. Coaches upload video after a game; within roughly 24 hours, it is analyzed and indexed by four Krossover employees, who tag hundreds of plays for each athlete, such as shots, steals, rebounds, assists and fouls. Later the coach can access the game video on Krossover's site and sort through stats, choosing to view, for example, the number of rebounds achieved by the center. Players, meanwhile, can use Krossover to splice together all their dunks in one video file and share it with whomever they like.

In 2010, while peddling a crude prototype of his product at U.S. basketball camps, Kulkarni met one high-school coach whose team had lost 63 games in a row. The coach signed on for Krossover, and after using the product for one season, his team came within one game of the Massachusetts state championship. "Stories like his have helped us to show that there's a competitive advantage to using our product," Kulkarni says.

Packages start at $799 per season; added services include the option to cut turnaround time and to provide stats on the opposing team as well.

Last year Krossover pulled in more than $3.5 million in angel funding to expand its service to cover lacrosse and football in time for the 2013 season. Many investors, Kulkarni says, are attracted to the inherent "sexiness" of sports businesses. "While a lot of traditional technology VCs shy away from sports, most professional investors have some sports connection--they played in high school or college, or they have kids playing," he explains. "Being involved in a sports business is fun."

Greg Cangialosi, CEO of Nucleus Ventures, invested in Krossover individually and then brought Kulkarni to his home base of Baltimore to organize a round of funding with other local angel investors.

"I was impressed with the product and the market," Cangialosi says. "There are 250,000 sports teams that could use Krossover in high school and college. And Vasu is impressive. He has the ability to get things done, or what a lot of investors call 'the hustle.'"

Sounds like the kind of player any coach would want on their team.