Internet Users Want to Be Invisible. And They Fear Advertisers More than the Government

The uproar over the surveillance practices of the National Security Agency has taken center stage in Washington, but for the majority of internet users, advertisers are more feared than the government, according to a new survey from the Pew Research Center.

Almost 9 in 10 internet users, or 86 percent of Pew survey respondents, report having taken steps to wipe away or hide their digital whereabouts. Practices include everything from clearing one's browser history to using a public computer to be able to browse anonymously. And 55 percent of survey respondents have taken actions those actions to clear their internet history to avoid specific people, organizations or the government, the report says.

Related: How to Avoid Getting Hacked (Infographic)

Unsurprisingly, internet users say their top threat online is hackers and criminals. Their second most avoided foe are advertisers, with 28 percent of survey respondents saying they have attempted to hide from advertisers online. Nineteen percent of users said they wanted to avoid people from their past and specific friends. Meanwhile, only 5 percent of respondents attribute their attempts to be covert on the internet to avoiding the government.

Even as they take steps to cover their digital tracks, however, many internet users know that in this age of hacking, nothing is really ever gone.

“Users clearly want the option of being anonymous online and increasingly worry that this is not possible,” Lee Rainie, director of the Pew Research Center’s Internet said in a statement. “Their concerns apply to an entire ecosystem of surveillance. In fact, they are more intent on trying to mask their personal information from hackers, advertisers, friends and family members than they are trying to avoid observation by the government.”’ 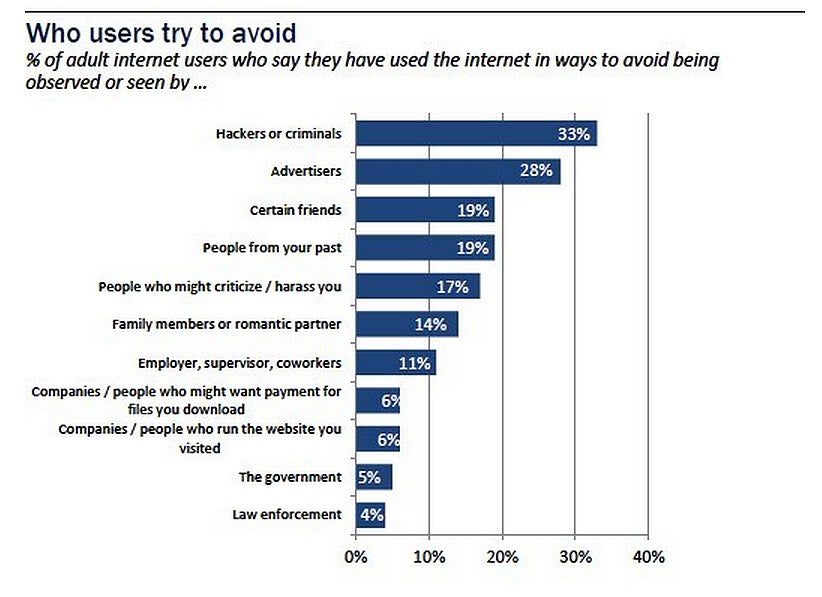 Internet users fret about their personal identity being uncovered online because the chances are decently high that either they or somebody they know have suffered a consequence. Here is a look at what survey respondents report having suffered:

The survey from Washington, D.C.-based Pew Research Center included responses from 792 internet users, all of whom were surveyed between July 11 and 14 on the telephone by the Princeton Survey Research Associates.

Related: How Google, Apple, Facebook and Others Use Your Personal Data (Infographic)