By Matt Villano September 24, 2013
Opinions expressed by Entrepreneur contributors are their own.

The upcoming Life is Beautiful festival, in which Hsieh is a backer, promises to showcase a bevy of A-list entrepreneurial keynote speakers, along with some stellar food and kick-ass music. The two-day event is expected to take over 15-square blocks of Downtown Vegas, just a few miles north of the famed Las Vegas Strip -- a gambling haven brimming with glitzy hotels and casinos.

Known among locals as "LIB," the shindig is just one of many activities the entrepreneur has plowed his time and energy into since 2011, when he launched a five-year, $350 million urban experiment to revitalize the city's downtown. In August, the entrepreneur helped launch a Vegas branch of Austin, Texas' annual South by Southwest music, film and interactive festival called SXSW V2V.

Just as with his other projects in the city, the end goal of LIB, which is slated for October 26th and 27th, is to prop up the future site of Hsieh's company headquarters. The ecommerce firm this month started moving into Vegas' refurbished City Hall from its current HQ in Henderson, Nev.

"We think it's important for the city to have a vibrant arts and music scene," says Hsieh, who has invested an undisclosed sum into the festival. He likens the downtown area to an "entrepreneur's Disneyland" -- full of passion and energy. "The festival can really help bring that energy level even higher," he adds.

Organized into four main tracts: music, food, art and learning, LIB is the brainchild of founder Rehan Choudhry. Two years ago, Choudhry left a cushy job in music promotion at a popular hotel to put together what he envisioned as an event to define the new, multi-faceted Sin City.

But unlike Hsieh's other Vegas-based flagship event V2V, LIB won't be another take on South by Southwest, or SXSW, according to Choudhry. Rather, he foresees the event as an opportunity to provide attendees with inspiration for something greater -- personally, professionally and, in some cases, even spiritually. 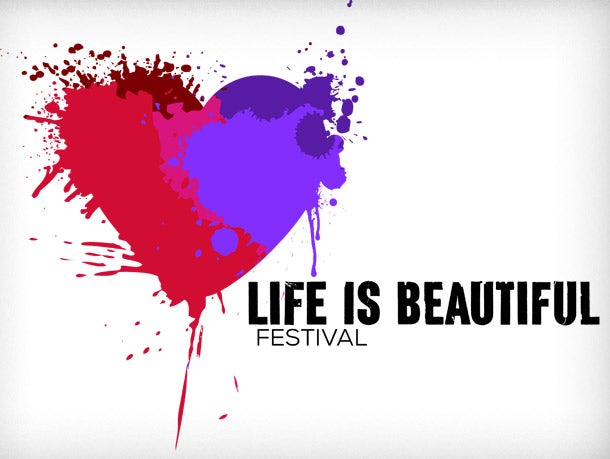 "All too often, people know what they love to do but they put it aside for something that is low-risk and makes them successful," says Choudhry. "We're focusing our attention on presenting content in a way that gets people to change this approach, and change the course of their lives."

Specifically for the learning tract, this means bringing in world-renowned speakers, both from the Vegas area and from farther afield.

In addition to Hsieh, confirmed headliners include: Wordpress co-founder Matt Mullenweg, chief evangelist and futurist at Intel Steve Brown and Rajil Kapoor, co-founder and CEO of Snapfish. The format of these talks is still under development, but the basics are clear: Most of the speakers will give TED-style talks of 3 to 15 minutes apiece. Some even will take questions and feedback from audience members.

Related: What Happens in Vegas Stays in Vegas, Unless You're Tony Hsieh

Area business owners are obviously thrilled by all the attention. Alexandra Epstein, the 28-year-old heir apparent to run the El Cortez Hotel & Casino, jumped at the chance to get involved with LIB. (The hotel's newest accommodations, the Cabana Suites, will host most of the musical performers and speakers during the event.) She notes that one of the most exciting things about the festival is its emphasis on Downtown Las Vegas as a destination.

"For years, this part of the city has taken a backseat to all of the things happening on the Strip," she says. "By taking over the neighborhood and making it a focal point of the city, Life is Beautiful will introduce all sorts of new visitors to a part of Vegas they've probably never seen."

And maybe they'll consider staying. Downtown Vegas, or "Old Vegas," is the home of Vegas Tech Fund, a seed-stage investment fund that has invested in local startup companies such as Fandeavor, Digital Royalty, Romotive and TicketCake, to name a few.

What's more, the Fremont East neighborhood is where many of the latest and greatest ideas become companies. On a recent weekday afternoon, the Beat Coffeehouse and Records, located directly downstairs from LIB headquarters, was buzzing with twenty- and thirty-somethings talking about everything from crafting cocktails to new ventures.

"Anytime you create space for people to share ideas and learn from each other, [it] is a good idea," says Tony Sims, CEO of Flavorus, a Los Angeles-based online ticketing vendor.

For Choudhry, he hopes to spark big ideas beyond LIB. Others' passion and enthusiasm might serve to inspire, and this inspiration may beget focused entrepreneurialism -- an equation from which all festival attendees can benefit.

"People look at the stage as 100 miles high, an impossible feat to climb. The reality is that it's no more than six steps tall," he says. "Most of us put barriers between engineering the kind of change our speakers have accomplished. Hopefully we can help them realize these are only perceived barriers, and that anyone can climb those steps to make a difference of their own."