Samantha Drake
December 6, 2013 5 min read
Opinions expressed by Entrepreneur contributors are their own.

For Elisa Strauss, delivering her specialty cakes to customers from her New York City headquarters sometimes meant taking the cakes with her on commercial flights. The customer paid for the transportation, which included an extra seat for the boxed cake.

What sounds like a simple solution for transporting the delicate cakes was made unpredictable thanks to Transportation Security Administration officials.

On one trip, TSA personnel agreed to scan the cake box with a hand-held scanner, notes Strauss, the owner of Confetti Cakes whose intricate custom cakes can resemble anything from designer handbags to cars and buildings. Another time, however, a TSA official insisted that she put the cake box sideways on the conveyor belt to fit through the carry-on baggage screener.

“No one understands, you can’t turn the cake on its side,” says Strauss. The situation resulted in Strauss missing her flight and fearing that she might be arrested.

Because she never knew what she might encounter going through airport security, Strauss began preparing for worst-case scenarios by transporting her cakes in pieces small enough to go through the screener and then assembling the parts at her destination.

Strauss’ adventures in cake delivery are an extreme example of what small online businesses face in shipping unwieldy or fragile items. Below, Strauss and other small business owners share their delivery stories and the important lessons they've learned to improve the experience and process.

Urban Wood Goods uses reclaimed wood to build furniture including shelving units, dining tables and desks. While early customers lived in New York City, True had not yet been and didn’t fully understand the challenges of shipping huge, heavy pieces of furniture to quirky Manhattan buildings, including walk-up apartments with narrow hallways, tight turns and no elevators or doormen in sight. “I’m a suburban girl. I had no idea,” she confesses. “I felt stupid [asking] what does a ‘walk-up’ mean?”

When seven large tables had to be shipped to different clients in New York City, True convinced her husband, Jason, to do the last-mile portion of the delivery themselves to see what it entailed. So they shipped the tables to a Federal Express hub in the city, where the couple rented a commercial van to pick up the tables.

They quickly realized that their freight carriers simply delivered the crate curbside, leaving the customer to figure out how to get it inside and unpacked. In one instance, for a pregant woman, True says she and her husband ended up paying for a “white-glove” delivery service to bring the furniture inside, set it up, and take away the crate and packing material. Urban Wood Goods now includes a detailed explanation of what customers should be prepared for when ordering large tables and desks and will help arrange for white glove service for an added fee at ordering. 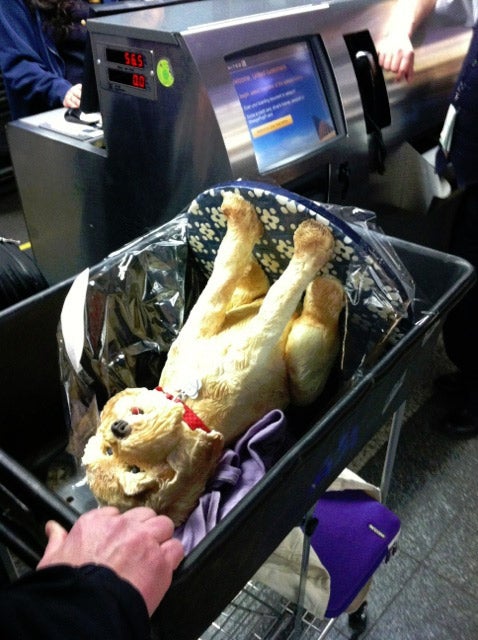 An unpredictable security process has changed the way Confetti Cakes travels with cakes that must be flown across the U.S.
Image credit: Confetti Cakes

True says the trial run helped them understand their customers’ needs and address those needs accordingly. “It woke me up to why delivery services charge so much,” she adds.

Owner Kristen Bangs uses the U.S. Postal Service’s Priority Mail, which is highly cost-effective but can be frustrating because shipments don’t always arrive on schedule, she says. For example, an in-state shipment to a Colorado client that should have taken one day took much longer because it was inexplicably routed through Oregon, notes Bangs. As a result, Spunky Fluff tends to pad shipment arrival dates and relies on UPS for clients who need their sign by a specific time, she says.

Continue improving processes. In-house errors are easy to make but can end up being very costly for a small business. An Urban Wood Goods employee once accidentally switched the labels on two crates containing tables going to clients in two different states. The company took a big hit when it not only had to re-ship the tables to the right customer, but had to eat the cost of one of the wrongly shipped tables when the customer who received it refused to give it up, explains True.

The employee didn’t lose his job but True says packing processes were revised to prevent that kind of mistake from happening again by ensuring that mailing labels always have two sets of eyes verifying them. “When you’re dealing with large items, small mistakes add up” she notes.

Keep a detailed record of errors. Logging every delivery problem, and how it was fixed, has been an invaluable resource for unraveling shipping mysteries, says Caroline Ragsdale Reutter, president and founder of Caroline’s Cakes in Spartanburg, S.C.

Reutter makes time to man the company’s customer service phone line herself and once located a missing cake safe in the customer’s own basement freezer. The customer had guests in town for a family event and one accepted the cake from the UPS driver and put it in the freezer without telling the hostess, Reutter explains. Troubleshooting this delivery was made easier thanks to the company’s shipping manual that lists every shipping problem and how it was addressed, showing her that a similar problem had happened at a previous delivery. The manual is updated annually and distributed to employees in hard copy form.

“It makes me feel good to help my customers out,” adds Reutter.