Startups Eschew the Made in America Label

By Cindy Augustine November 21, 2013
Opinions expressed by Entrepreneur contributors are their own.

From Martha Stewart's American Made event to Entrepreneur magazine's recent spread on the theme, the obsession with the Made in America label has reached a fever pitch. But what do you do when your product idea can't be made in the U.S.?

That's the question Simon Ford and Malte Barnekow found themselves pondering in 2009, when they were canvassing different locales to house their spirits brand, The 86 Company. "We actually looked to distillers and suppliers in several countries to partner with on making an old school Carta Blanca rum, like the ones that came from Cuba during Prohibition, There were distillers that make excellent rum and were willing to work with us, but didn't have the knowledge and capabilities for the style we wanted to create."

And while the two New York City-based founders considered facilities in the U.S., which accounts for most of the company's sales, they noted a lack of manufacturing capabilities as a core reason why America was out. "Local manufacturing in the U.S. is simply not competitive," says Barnekow. "In my experience, it's twice the price for half the quality, across the board."

In recent years, the U.S. has certainly seen a resurgence in manufacturing, with companies like American Giant and Black & Denim making a commitment to produce products stateside. And various marketplaces and services such as Etsy and Maker's Row have sprouted to support them.

Related: The Man Behind the Hoodie That Started the Made-In-the-USA Apparel Movement

Still, some startup founders, who would normally choose to set up shop or source ingredients in the U.S., are either finding the process prohibitively expensive or impossible due to a lack of resources. 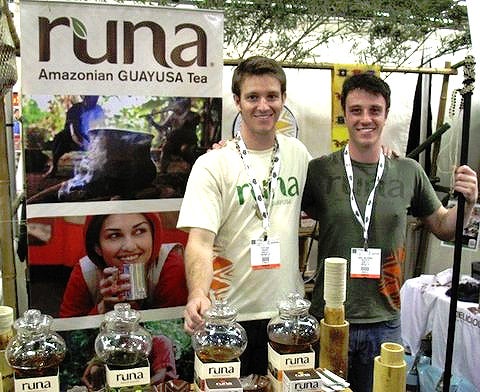 Runa is a Brooklyn-based beverage company (with a nonprofit branch) that makes tea and an energy drinks. Yet the main ingredient for the company's tea is called guayusa, a leaf from trees that grow in the Amazon. To harvest the leaf, which required making connections with farmers in Ecuador, was a challenge in itself. "We had to figure out if and how [Ecuadorian] communities wanted to work with us, and we had to get a product regulated and accepted in the U.S. that hadn’t been sold there before," says Dan MacCombie, Runa's co-founder.

MacCombie and Runa co-founder Tyler Gage spent the first six months of the company's life traveling around South America, scouting out places to source their guayusa. The trek also required "convincing people we were legit, had good intentions and we weren’t a bunch of North Americans coming to screw them out of their money and their land, which unfortunately, is something they’ve experienced in the past," adds MacCombie.

Despite its benefits, having a global operation, comes with many headaches. Just ask Jamal Motlagh of Acustom, a New York-based custom clothing company that uses digital technologies to create bespoke menswear.

Related: Flint and Tinder: A Case Study in American-Made Underwear

"Legal issues such as tariffs and import duties have been problematic," says Motlagh, whose company uses fabric sourced everywhere from North Carolina to Turkey but operates mainly out of a factory in China. "Import has been the biggest issue into China. The problem there is that you need a ground logistics team that you can trust. Fabric production and supply is still an old-school game. There aren’t good websites or ways to get a hold of them or their offices globally."

The 86 Company's Barnekow adds that working with distillers from around the world comes with its own set of challenges. "Our caps are from England, our bottles from China, our liquids from Canada, England, Mexico and Panama," he says. "So, yes, we deal with the tedium of time differences, currency fluctuations, regulation, complex tax constructs and a shipping industry that has very little time for small entrepreneurs like ourselves. It makes for a very nice story from a marketing and product perspective, but it does make our day-today lives extremely difficult."

To minimize this difficulty here are three tips that have helped these founders make their international operations work:

Right size your expectations.
"In my experience, a general rule is work with suppliers that are the same size as you," says Barnekow. "Large suppliers are designed to serve large customers. If you are a small company, look for small suppliers. You will speak the same language and have an understanding for each other’s incentives."

Focus on the positive.
"The moment where we think everything would be easier [if we were based] in the U.S. happens every day, but it wouldn’t make me want to run this company," says MacCombie from Runa. "We connect the farmers to the land to the supply chain to the market… I know people starting tea companies now -- good people, more power to them -- but I don’t feel that’s what I want to contribute to the world. The complexity of working with farmers, supporting ecosystems -- that’s what keeps it interesting. I spend more of my time selling tea, but it’s always in the back of my head that I’m doing something that really aligns directly with what I believe in."

Make the most of your situation.
Working directly with the people in the factories as well as the sourcing companies has been very interesting, and I use the time difference to my advantage," says Jamal from Acustom. "I send questions during my work day and later in the night, I’ll get an answer back… So when I wake up, they’ve had a full day to work on whatever the question or problem was."