Franchisees: How to Make It in a Big City

Walkable commercial districts, mom-and-pop shops and unique restaurants are all part of the local flavor and culture of big cities. In most urban cores, there are no mega-grocery stores, big boxes like Target and Walmart or strip malls with convenient parking. The franchise brands that make up the commercial ecosystem of suburban and small-town life simply don't exist in these dense population centers.

In fact, many franchise brands would rather expand to Dubai or the Philippines than move into a U.S. urban core. Opening in a downtown location presents a host of challenges. Urban centers often have extra taxes and more stringent regulations, especially for restaurant brands. Rents, which can be substantially higher than the franchise model calls for, may price franchises out of the market. And those that can afford space often are forced to deviate from established architectural footprints; for a franchise brand that typically has a 2,000-square-foot layout, squeezing into a storefront half that size may require redesigning the concept and its operating procedures from the bottom up.

Some company-owned chains are willing to take a financial hit while an urban store develops a customer base, but pure franchising brands must find franchisees willing to foot the extra costs--the type of investor many emerging brands have trouble attracting.

"It's not that complicated," says Jim Runyon, vice president of Franchise Real Estate, the company that finds locations for Anytime Fitness. "When you get in more densely populated urban areas, real estate, taxes, everything is higher. For us, we have to have more members to compensate for the higher costs."

But not all big cities are equal. Many urban areas that boomed after World War II have large retail spaces and sufficient parking. Cities in the Midwest and South have relatively reasonable rents. It's the older cities on the East Coast and in California that are the most difficult for franchises. "Those can definitely be more challenging," Runyon says.

Greg Carafello is a veteran of doing business in New York City. In 2001 the main branch of his $4 million printing company was destroyed in the 9/11 attacks on the World Trade Center. Three years later, he was out of business. But he leveraged his knowledge of the area and the printing culture to become a master franchisee in New York and New Jersey for Cartridge World, an Australia-based company that sells and remanufactures printer cartridges as well as produces its own cartridge brands.

Related: A Small-Business Owner Who Survived the World Trade Center Attacks Looks Back After 10 Years

Carafello opened stores in suburban New Jersey using Cartridge World's typical in-line strip-mall model. But when it came time to bring his concept to Manhattan, where he currently has four stores and room for another 30, he was forced to rethink his operations. "What we determined upfront is that we don't need to pay high retail rents for sales offices and production facilities," he says. "You don't want huge rents for franchisees trying to start out."

That's why Carafello's New York City franchisees often divide their operations, reserving their costly 300- to 350-square-foot storefronts for retail space and moving their offices and sales staff to cheaper locations. They also have cartridges refilled at a facility outside the city, a practice that has been adopted throughout the Cartridge World system. "We call it 'the Manhattan model,'" Carafello says. "It has a smaller footprint, and all the manufacturing happens off-site at a Cartridge World facility. If Cartridge World didn't have its own factories, this store model would not work."

In Manhattan, location is everything. But Carafello says the key is not necessarily where his stores are, but what's above them. When he started out, he placed a store at the bottom of a high-rise residential building. He soon learned that the formula for success in a high-rise is to have at least 60 floors of businesses above. "It's got to be in a high-volume area," he says. "Ninety-five percent of our business is from small firms with fewer than 20 employees, like accountants, law firms, etc. The point is, there's enough small businesses in a building like that to support a franchise in a handsome way."

In fact, because Cartridge World in Manhattan has become essentially a business-to-business product, Carafello believes some franchises may eventually choose not to have retail stores at all but will instead comprise just an office with a sales and delivery team; this would be a first for the system and a much less expensive way of doing business.

Marketing, too, works differently in the big city. "We can't afford to advertise in The New York Times or Wall Street Journal," Carafello says. "So we advertise in Crain's New York, which is a business publication. But we've found our best form of advertising is to bungee-cord a sign around a guy and have him hand out sample pricing cards on the street. That really gets the phones ringing." 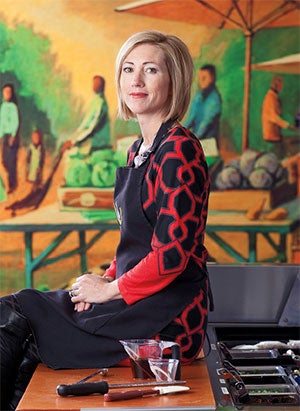 Manhattan isn't the only urban location that has forced franchisees to make a few tweaks. Jodi Hamilton owns two Chicago-area outlets of Dream Dinners, a franchise that lets busy people come in and assemble meals for their families using fresh, pre-prepped ingredients. One of her stores is in the Roscoe Village section of north Chicago, an area of single-family homes and a suburban lifestyle. "Typically, our customers are stay-at-home moms with two to four kids," she says. "It's super neighborhoody."

Her other store, however, is in Ukrainian Village, a much more densely populated area just west of downtown. "It's only four miles away from our other store, but the demographics are very different," Hamilton says. "The families are much smaller, and we have a lot of young professionals who come in because they don't want to cook for themselves."

That means she needs to operate the stores differently. The Roscoe outlet is busiest in the morning, while the Ukrainian Village store gets hopping later in the day and also stays open on Sundays--one of the only stores in the system to do so. "Sunday is the day for people to get things done. In Roscoe, Sunday doesn't work for people; it's a little more sacred," she says. "Which is interesting because they're not that far apart."

But the biggest difference between the two stores is the real estate they occupy. Because many spaces in Chicago are long and narrow, Hamilton had difficulty finding a storefront that would work for the franchise located closer to downtown. "It was a big challenge finding the right retail space for us," she recalls. "Our floor plan is set up to meet the regulations for handicapped access, and I can't tell you how many spaces we looked at that were just two feet shy." Hamilton searched for an urban location for nearly two years, negotiating three leases that fell through.

Eventually she chose a space with more square footage than she needed--2,400 square feet vs. the typical 1,500- to 1,800-square-foot Dream Dinners facility. Though it was difficult to carry the extra real-estate costs, Hamilton incorporated new ways to use the space to increase revenue, like hosting in-store and corporate events.

Reasonable rents and workable locations are crucial to surviving in the city, but there are other considerations as well. Clif Bullard found that out while opening his first Moe's Southwest Grill in Manhattan this January.

Bullard, a veteran franchisee who has been opening restaurants in the Carolinas since 1980, signed a deal to bring seven Moe's outlets to New York and New Jersey. He thought things would go smoothly once he found a prime location beneath a Marriott on 39th Street and 6th Avenue. The 6-year-old building had a fresh space blocked out for a restaurant. But when he started construction he encountered problems. Building codes had changed in the previous six years, so the ventilation system was already obsolete. Bullard had to redo the entire system. The gas line was not set up, which led to a series of delays. Fortunately, his landlord worked with him to get the site ready. "My development manager and I have built close to 70 new restaurants and never run into the things we did in New York," he says.

Yet the experience hasn't soured him. Bullard is actively trying to develop six more territories in Manhattan and one in urban Hoboken, N.J. Now, he says, he knows what questions to ask, and he believes all the effort will be worthwhile in the end--not just for him, but for the entire Moe's brand. "I understand that Manhattan is hard to break into, but this is about more than just wanting to be there," he says. "The more dents we make in an urban area, the better we do. What better place is there to give it a shot than Manhattan?"