Cynthia Rowley is a top women’s wear designer with six brick-and-mortar stores around the country. However, lately she’s doing more than tending to her multi-million dollar fashion line and restocking her namesake boutiques. Lines like hers are helping to reshape e-commerce by pioneering the concept of “crowd commerce.” 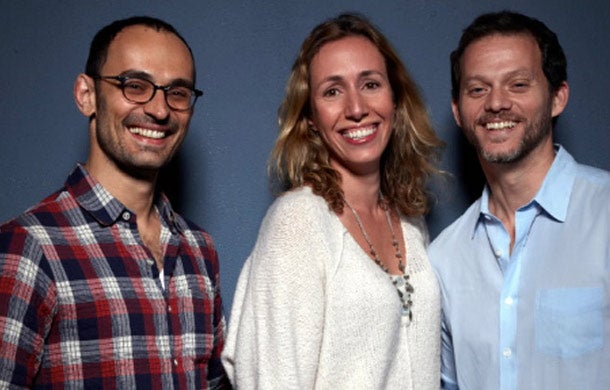 Designers can’t always convince department store buyers to take risks on new styles. Meanwhile, style houses compete with so-called “fast-fashion” brands whose goods are both plentiful and affordable. But since these lower-end brands tend to overproduce, the model is wasteful and makes it hard for shoppers to dress distinctively. “It’s not sustainable, it’s financially inefficient,” says Yaniv Reeis.

Reeis is a co-founder of startup Crowdemand along with Liat Cohen and Marat Stary. The three childhood friends combined their respective backgrounds in cyber security, tech consulting and advertising to launch a site that features limited edition pieces for pre-order.

The site strategically partners with high-end, established designers. This provides visibility and makes it possible to move items through production and delivery in just eight to 12 weeks. (By comparison, emerging lines might need two to three months to ship). When minimum production numbers are met, credit cards are charged and pieces are put into production.

Partnering with a fashion powerhouse 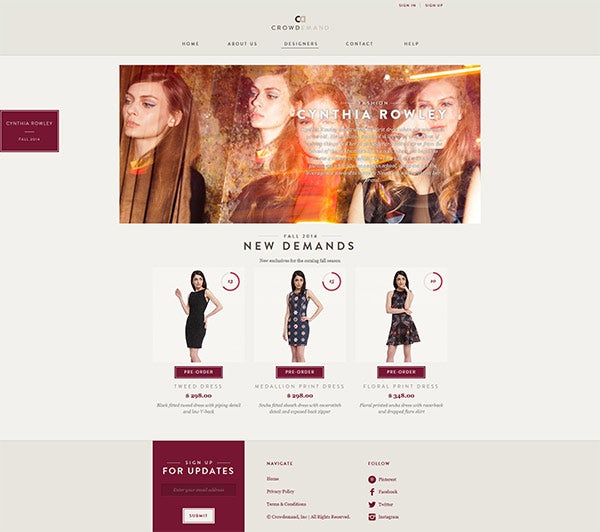 Clothing and accessories are priced from $245 to $2,000. “The Crowdemand experience is still a luxury segment,” says co-founder Stary. “Competing at price is just not a game to enter in the e-commerce space.”

Last year, Rowley met the Crowdemand founders at a fashion trade show and their startup idea piqued her interest. She’s been experimenting with e-commerce to introduce new products, starting with Exhibition A, a site she co-founded which sells limited editions of work by top contemporary artists. She has also launched an eyewear line that competed directly with Warby Parker, and formed a partnership with Birchbox that unveiled her beauty collection. The privately-held company does not publicly report revenues for these online ventures.

Related: To Succeed in Fashion, Find Business Partners You Trust

“We were always enthusiastic about new ways that we can create a conversation with the Cynthia Rowley girl,” says the designer. “I believe in a direct, online-only commerce model.”

Crowdemand allows designers like Rowley to test the market with new ideas through special campaigns such as “Back by Popular Demand,” where designers resurrect popular pieces from past seasons. It allows designers to test new products and aggregate demand in ways they can’t in traditional retail environments.

“This is definitely a way where we can own the space for a few weeks and have access to our customer’s feedback before the clothing hits the selling floor,” Rowley says.

The first month: launching and troubleshooting

Crowdemand went live on April 8 exclusively featuring Cynthia Rowley designs. It then staggered launches with lines from contemporary line Whit and Brazil-based Meskita throughout the month. 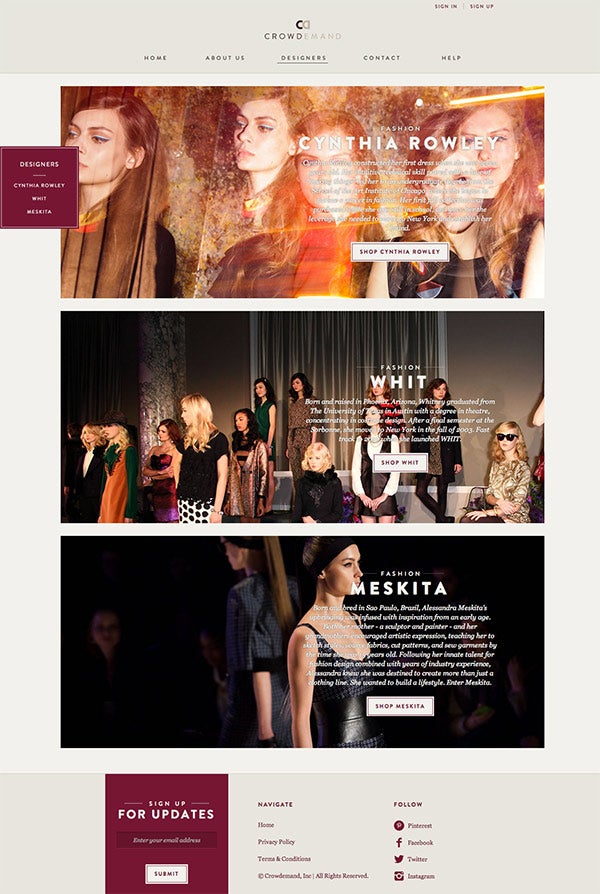 After Rowley’s two-week campaign, all pieces reached at least half the minimum number required for a successful campaign. Cynthia Rowley and Crowdemand plan to discuss another campaign for a future date.

Reeis says because it built the core technology, CMS and analytics from scratch, it remains agile and can troubleshoot during designer launch dates. But Marat adds that it’s not just a software service. “We provide video production and photography for marketing and handle all the shipping,” he says. “So we own both the backend technology and the retail operations.”

For the founders, this end-to-end platform was part of a wider goal to disrupt retail patterns. “Crowdemand was built on the idea of crowdsourcing and creating demand for things users want but haven’t been created yet,” says Reeis.

Ultimately, the site gives designers like Rowley real-time insight into what customers are interested in wearing, instead of what department store buyers want. “It’s another way of going directly to our consumer,” says Rowley. “This is a proven model.”

Related: How This Startup is Disrupting Social E-Commerce

This Entrepreneur Is Challenging Us to Rethink What's In Our Closets. Here's What She's Learned Along the Way.