By Laura Entis August 15, 2014
Opinions expressed by Entrepreneur contributors are their own.

Summer weather is great and all, but for many of us, winter's departure is marred by the return of tiny, flying bug vampires. Mosquitoes, quite literally, suck.

Luckily, there are a host of mosquito-repellent sprays and lotions available for purchase at your local drugstore. Unluckily, these products can kind of suck, too; not only are they sticky and annoying to apply, but slathering oneself with mosquito-repellent chemicals (most commonly DEET) can be an unsettling experience. Plus, there are questions about whether DEET is even safe to apply to the skin.

Tired of all that? Enter the Invisaband, a bracelet that gradually releases geraniol, an essential oil found in geranium that blocks mosquitoes' ability to detect carbon dioxide, and thus their ability to detect -- and bite – humans. Its creators claim the band will repel mosquitoes for up to 120 hours (in between uses, it can be preserved in a resealable bag) and are hoping to crowdfund $10,000 to launch the product.

The campaign kicked off yesterday on Indiegogo. 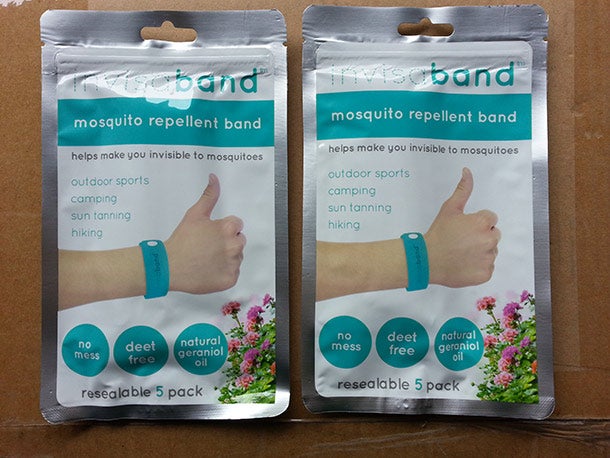 Related: This Faceless Watch Has Raised $400,000 on Indiegogo

This isn't the first mosquito-repelling wearable to raise money on Indiegogo. Last summer, the Kite Mosquito Patch – a 2-by-2-inch adhesive square that releases non-toxic compounds -- also launched a campaign on the platform. The product was an absolute hit, blowing past its initial funding goal of $75,000 in a mere four days, eventually raising a total of $557,254. A large part of the campaign's success was its social component: Kite Patch promised to first test the adhesive squares in Uganda (where malaria is a continued threat), before delivering them stateside. Kite Patch backers have yet to receive the product.

While Invisaband lacks a similar social component, its creators promise a speedy delivery: Backers can expect to receive the product (pledges start at $19 for a pack of five bracelets) within two weeks after placing an order, says co-creator Matt Kostanecki. Two-thousand units have already been manufactured so Invisibands can be immediately shipped once a pledge has been made, regardless of whether or not the project reaches its funding goal.

Originally, the campaign was scheduled to run in June, but Kostanecki pushed back the launch date. "We wanted to make sure we actually had the physical product," he says. "The worst thing is for someone to back a project, and the product doesn't come for a year."

Related: New Product Makes You Invisible to Mosquitoes and May Save Lives

While Kostanecki is confident in Invisaband's mosquito-repelling powers, he recognizes that the band may not be 100 percent effective for everyone. (DEET is still generally considered the most effective mosquito-repellent on the market, although Kostanecki cites researchers such as James Butler, an entomologist with University of Florida’s Institute of Food and Agricultural Sciences, who say geraniol is an effective alternative.) "Not happy with the product? You can return it for a full refund within 60 days," he says. "Over-delivering and underpromising is our goal.

So far, the product isn't following Kite Patch's explosive trajectory. As of 1 p.m. ET today, a day into the campaign, Invisaband has raised $141, or just over 1 percent of its funding goal.

But there's time yet: The campaign doesn't end until September 13, and while the weather may already be cooling down the mosquitos will still be buzzing.

Related: Every Entrepreneur Should Know These 3 Essentials About Crowdfunding