Why Startups Fail, According to Their Founders

When the founder of a startup company shuts down her or his business, it is customary to pen an essay that tells the rest of the community what went wrong, called a failure post-mortem. It’s estimated that nine out of 10 startups fail, which is why the technique has become so common as to be a Silicon Valley cliché. Some of these essays are honest, enlightening, and brave. Others point fingers or issue backward non-apologies. Medium, the publishing platform co-founded by Twitter co-founder Evan Williams, is the preferred medium.

The proliferation of the failure post-mortem has helped create a bizarre cult of failure that seems wrong-headed. Celebrating failure (“Fail fast” goes the mantra) seems to let people off the hook for bad behavior. Upon closer inspection, it seems less misguided than necessary. Starting a high-growth business is a roller coaster. Founder-CEOs feel pressure to keep up the facade of success, even when things are actually falling apart behind the scenes. Only recently, after the tragic suicide of Jody Sherman, CEO of a startup called Ecomom, did the technology community begin to publicly acknowledge the problems with its “entrepreneur as hero” narrative. Publicly admitting to failure, and examining it, can take guts. It also distills the narrative to a case study from which other entrepreneurs can learn.

CB Insights recently parsed 101 post-mortem essays by startup founders to pinpoint the reasons they believe their company failed. The company crunched the numbers to reveal that the number-one reason for failure, cited by 42% of polled startups, is the lack of a market need for their product.

That should be self-evident. If no one wants your product, your company isn’t going to succeed. But many startups build things people don’t want with the irrational hope that they’ll convince them otherwise.

The most prominent modern example of this phenomenon is the mobile phone. People dismissed it as a novelty in its early days. Obviously, they are no longer a novelty. The late Apple co-founder Steve Jobs famously said, “A lot of times, people don’t know what they want until you show it to them.” The problem is that entrepreneurs have taken that to heart. For every $19 billion company like Uber, the private transportation service, there are all manner of frivolous products that never evolve past the phase.

There are more practical concerns. Polled founders also cited a lack of sufficient capital (29%), the assembly of the wrong team for the project (23%), and superior competition (19%) as top reasons for failure. 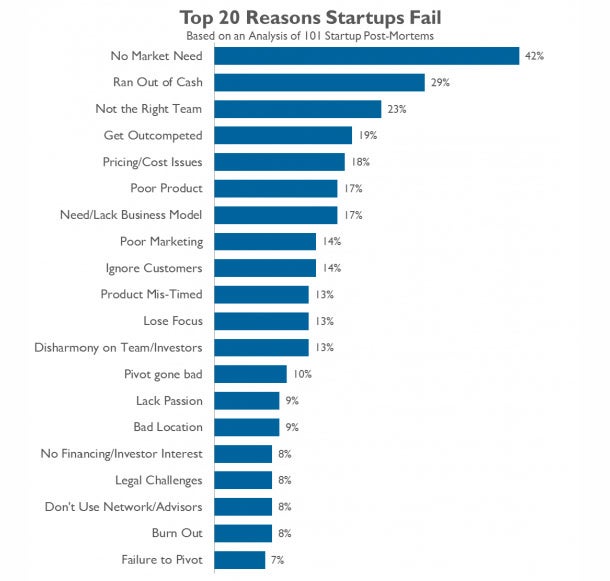 The self-assessment lines up, for the most part, with what industry experts have said. Paul Graham, a partner at the Y Combinator startup accelerator, wrote in 2007 that startups usually die because they run out of money or a founder leaves.

Steve Hogan, who runs a startup turn-around shop called Tech-Rx, says companies with founded by one person—that is, no partners—are most likely to fail. He ranks product demand, or a lack thereof, second. The existence of a co-founder helps avoid many of the reasons cited at the bottom of the CB Insights chart, he says, including disharmony, poor marketing, and the wrong team.

Running out of cash does not cause a startup’s failure, Hogan says—it’s merely a symptom of another issue. Excluding instances of “stupid spending” or the inability to raise capital in the first place, startups tend to run out of cash when a CEO has overlooked all other indicators of failure. “Unfortunately, sometimes it’s the only ‘symptom’ that the leadership sees,” he says.

Erin Griffith is a staff writer at Fortune.

Either accept the mistake or be mediocre. ABC to narrate your failures well.

Sell more at Christmas! 5 ways to add customers and tickets