Across the U.S., Bars Are Letting You Play Your Favorite Childhood Video Games

This story appears in the December 2014 issue of Entrepreneur. Subscribe »

Old-school is cool again. Arcade games that were popular in the early ’80s are reentering the social sphere thanks to savvy bar operators who know that a bit of Super Mario is better with mead on hand.

Though no firm industry numbers are available, there’s observable growth in this specialized market. “There’s just been an explosion of arcade bars,” says Paul Kermizian, co-founder of New York’s Barcade. “The last two years have been crazy. We tried to keep track, but it seems like there’s a new announcement or new place opening every week.”

In Chicago, Emporium Arcade Bar doubled its space to 6,000 square feet, adding 20 arcade cabinets to its roster; Headquarters Beercade also stepped up its game by opening a second, larger location last August in River North. Los Angeles, too, has joined the action with the opening of downtown’s industrial-chic EightyTwo and The One Up in Sherman Oaks.

The perfect pairings of booze and 8-bits are here to stay, it seems. Here are a few places around the country where you can throw back a Scotch with your Space Invaders.

Using all their savings and piling on credit card debt, Paul Kermizian, Jon Miller, Scott Beard, Kevin Beard and Pete Langway opened the first Barcade in 2004 in Brooklyn’s trendy Williamsburg neighborhood. “We did a lot of work ourselves. We constructed the bar, did demolition, did everything but the electricity,” Kermizian says. In the past decade, Barcade’s dedication to classic arcade games and craft brews has skyrocketed so much that the team has trademarked the establishment’s name and expanded to four more locations, including two newly minted ones in Manhattan.

Established in 1999 in Portland, Ore., by Kneel Cohn and Betty Farrier, Ground Kontrol began as an arcade, then added booze to the equation in 2005 after a management change. Dubbed by SFGate as one of five best places to revisit the ’80s, Ground Kontrol operates more than 60 classic video games and 27 pinball machines. It even sells vintage home systems like the Atari 2600, Nintendo Entertainment System and Super Nintendo. 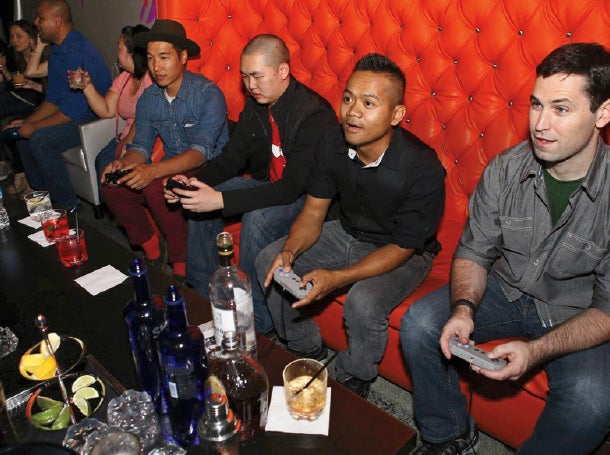 It's game on at Insert Coin(s) in Las Vegas.
Photo (C) Peter Suh

Christopher LaPorte spent $1.4 million (funded by two venture capitalists) to renovate a 6,600-square-foot space in Las Vegas and turn it into this hybrid club, lounge and video arcade. Insert Coin(s) gives customers an option to go old-school with 60 vintage arcade cabinets, from Street Fighter to Tetris, or play modern video games while lounging in its 50-foot LED illuminated bar as DJs pump up the music. But the venue is not just for game geeks, LaPorte says: “It’s really a boutique-style bar-nightclub that is essentially for everyone.”

One of the newest kids on the block, EightyTwo was founded this year in L.A.’s hip Arts District by Scott Davids and Noah Sutcliffe in homage to the year 1982, often referred to as the “Golden Age of the Arcade.” Each Friday and Saturday some 5,000 customers queue to get into this 4,000-square-foot space and play the selection of more than 40 arcade games and pinball machines such as Donkey Kong, Ms. Pac-Man and a rare Missile Command cockpit.