Videoconferencing Problems? Here's the System That One Company Swears By.

This story appears in the March 2015 issue of Entrepreneur. Subscribe »

Think of videoconferencing like drinking free-trade, independently roasted coffee: Tons of people are doing it, but nobody’s really doing it efficiently or cost-effectively. Legacy systems cost anywhere from $2,000 to $10,000 and require significant hardware in each conference room. Then there’s the issue of support—because of the systems’ complexity, companies must set aside tech-support resources to troubleshoot when errors occur.

At Mimeo.com, a content distribution and printing company based in New York City but with employees all over the world, the challenge was particularly onerous. Last year, after Mimeo.com acquired another printing company in Germany and needed to assimilate disparate work forces, executives had to figure out an affordable way to incorporate efficient videoconferencing into their management routine. They tried to run video calls over Google+ Hangouts, but found the service unreliable.

Vice president of marketing Doug Bohaboy knew there had to be a better way. “We just weren’t getting everything we wanted out of what was available,” he says. 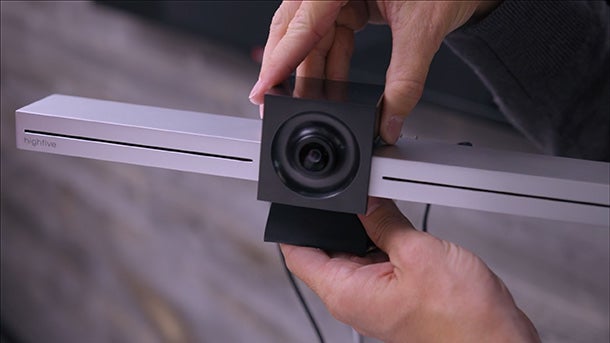 Give me a Highfive: videoconferencing, the next generation.
Image Credit: High Five

That better way came when Mimeo.com got on the list to beta-test a new videoconferencing solution from Silicon Valley-based Highfive. The plug-and-play integrated hardware-software solution with a built-in camera retails for $799 per device and is designed to handle all the videoconferencing needs for one conference room.

Each device delivers HD video and high-fidelity audio. Installation is easy and straightforward. The interface is intuitive. There are no extra cables or wires; instead, each user downloads a special extension for the Google Chrome web browser, which allows the system to share screens wirelessly from the main interface onto individual employees’ laptops or smartphones.

The solution appealed to Bohaboy for its ability to keep employees’ interest during meetings. “One of the reasons we like videoconferencing so much is because we’ve found our people to be more engaged than they are on a phone call,” he says.

Bohaboy says more Mimeo.com employees across the world are participating in videoconferences than ever before. The ability to join the sessions via mobile devices has also transformed the way employees participate—now anyone who’s in the conference can drive any part of any meeting, no matter where they are.

Even better, Highfive has cut costs. Shawn Winters, Mimeo.com’s IT director, estimates that the system saves the company more than 60 percent over the old way of installing big-ticket systems from multiple vendors and allocating IT support for each conference.

Winters notes that the new technology has made such a difference that a handful of Mimeo.com departments are toying with ways to use the setup outside the office. He points to the Learning and Development team, which wants to use Highfive to implement the company’s training platform. “They can save thousands on travel, as the typical [training] trip for these guys is one to two weeks,” he says.

“Highfive makes videoconferencing accessible for smaller companies via the cloud with a low-cost package,” he says. “It’s about time someone paid attention to that market.”

Enhance Your Zoom Calls With This Video Kit

The Best Lighting for Your Zoom Calls to Look More Professional

The Best Mac Webcams No Matter Where You Work

3 Ways to Avoid Getting 'Zoomed Out'