By Laura Entis March 15, 2015
Opinions expressed by Entrepreneur contributors are their own.

Entrepreneur is on the ground for SXSW. Check back for highlights from the festival as well as insights on trends from a range of thought leaders and innovators. See Billie Whitehouse and Rebeccah Pailes-Friedman today at the panel Beyond Wearables: Future Fabrics and Fashion Design, on smart fabrics and e-textiles.

The next hot wearable might be the one no one knows you’re wearing. Experts predict a wave of smart fabrics and e-textiles that do what FitBits and Apple Watches now, just with a little more subtlety.

"As things get smaller and cheaper and faster, integration becomes easier. I see technology and fashion becoming one,” says Billy Whitehouse, co-founder of Wearable Experiments, a company integrating fashion and technology. “We're heading in the direction where everything becomes invisible."

Such invisibility is at odds with a current market focused on bulky, attention-grabbing gadgets. "There's a gap between what me and my fellow designers imagine can happen with this material in the future and what is actually happening with it for the consumer today," admits Rebeccah Pailes-Friedman, an associate professor of industrial and fashion design at the Pratt Institute. "It's starting to happen, but we're not there yet."

Related: Computers in Your Underwear: Where Wearable Tech

That’s not to say new concepts won’t grab headlines. Consider Intimacy, for instance, a dress embedded with heart rate sensors that transitions from opaque to sheer when the wearer is aroused, or Fundawear, by Wearable Experiments, a sensor-equipped underwear that allows couples to stimulate each other from afar.

But beyond buzz, weaving and embedding technology into fabric can expand possibilities and usefulness for wearers. Experts predict the new wearables will track and record health and fitness statistics, wash themselves via sunlight, provide haptic feedback such as directions, and even stabilize body temperature.

"We've had this brutally cold winter -- wouldn't it be amazing if you had a really lightweight coat that could control the environment of your body and separate it from the external so that you don't have to go from a heavy coat to a light coat," muses  Pailes-Friedman. "I see that happening." 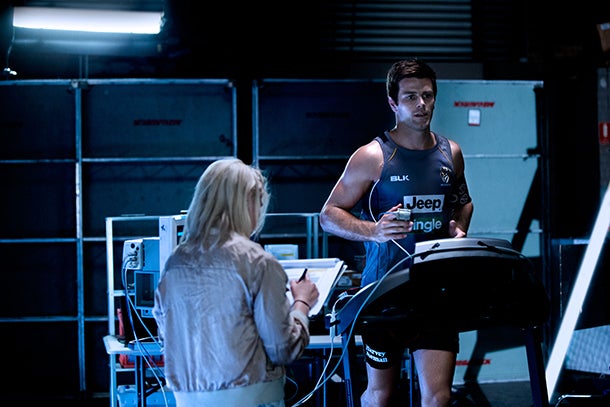 Wearable Experiment's Alert Shirt lets wearers mimic the physical sensations experienced by professional athletes during televised games. (Real time data collected from the players is projected back to the jerseys, so if a player gets tackled during a game, the jersey will recreate the hit by applying pressure.)
Image credit: Wearable Experiment

Embracing gadgets without screens could even do the unthinkable: reacquaint wearers with the world around them. Imagine not crouching over a smartphone for directions but standing straight and looking about you, all while wearing the city-specific, GPS-enabled Navigate Jacket that "taps" wearers' shoulders to indicate which direction to turn. Says Whitehouse, products like these could give “people back the opportunity to connect on a human level."