These Entrepreneurs Braved New Frontiers in Franchising and Found Success

With fast-evolving consumer technology and a broadening palate, the franchise world today looks very different from that of a decade ago. Cell-phone repairs. Hawaiian barbecue. Lobster food trucks. They’re all part of the movement toward anything new and everything mobile.

Opening a burger franchise is not easy, but at least there’s a template: Do what the other guys did before you, but do it better and don’t make the same mistakes. Pulling a whole new sector into the franchise industry or creating a concept from scratch? That’s a different challenge altogether.

Marcel Fairbairn knows this well. He recognized the potential of LED lighting more than a decade ago, despite underutilization by consumers and lackluster marketing by retailers.

The problem? People were using LED bulbs like incandescents—a 100-year-old technology—which is a bit like buying a supercomputer and using it only to play Pac-Man. LED bulbs are available in almost infinite combinations of color and warmth. Utilized with the right lighting systems, they’ve led to a new era of in-home lighting design, in which a room can have subtle violet hues, or the light intensity can change throughout the day. But go to a big-box store, and you’ll find LED bulbs almost all within the tiny spectrum of incandescents.

Back in 2005 when Fairbairn, who owned a lighting company, saw the prices of LED technology dropping and the migration of the tech into homes and businesses, he started Wellington, Fla.-based LED Source. Five years later he franchised the concept, bringing high-quality LEDs and professional lighting design to businesses.

It took another five years to build his brand to 15 units. Now, growing pains behind him, Fairbairn anticipates a burst of expansion in the next year, saying the public is finally ready to realize the potential of LEDs.

“There have been hills and valleys over the last five years,” he says. “Really more hills than valleys. But we see blue sky ahead.”

Fairbairn is one of many entrepreneurs bringing new concepts to the franchise world. Another is Jeff Platt, CEO of Los Angeles-based Sky Zone. In 2004 his father wanted to start an indoor trampoline league, mounting wall-to-wall trampolines in a warehouse in Las Vegas. The idea didn’t take off, and the Platts were ready to close down when curious kids from a nearby skate park took an interest in the massive jump space. One thing led to another, as they say, and the younger Platt saw potential for an industrial-scale bounce house.

“When we started, we never imagined we would have created a full franchise category,” he remembers. “It brought with it a bunch of challenges. There was no model we could learn from. We couldn’t call a consultant. No one knew what an indoor trampoline park was. That meant creating everything from scratch.”

Today Sky Zone offers trampoline exercise classes, sports leagues and children’s parties in more than 100 locations in North America and Australia; Platt estimates the company will have 180 units open by the end of 2016.

Others, inspired by Sky Zone’s success, have developed their own versions of the trampoline park. But Platt says the competition doesn’t concern him. “Inventing this thing gave us first-mover advantage,” he says. “That’s what allowed us to get so far ahead of the competition. When you get to a certain size and scale, it lets you invest in technology and innovation. You can pour money into marketing that the competition just can’t. And having 100 units gives us more notoriety and brand equity.”

First-mover advantage is what Debra and Ken Blue are hoping to capitalize on with Blue Moon, their estate-sale franchise. In 2008 the couple moved to Raleigh, N.C., so Debra, a physician, could start a new job. A month later, Ken was laid off. That’s when the Blues opted for self-employment, deciding to turn Ken’s hobby of selling antiques into a business. In 2009 he began organizing estate sales. Soon after, Debra was driving down the highway when she saw a billboard that said “Franchise your business.”

“It struck me—that’s exactly what we need to do,” she recalls. “And that’s been our mission ever since.”

The Blues expanded their estate-sale concept locally, carefully systematizing their processes and identifying sticking points future franchisees might face. The biggest hurdle was pricing. In addition to creating a back-end system that helps franchisees price objects and develop a network of local appraisers, the Blues set up a boot camp where franchisees learn to discern valuable furniture, knickknacks and electronics from junk.

“When we looked around to see if anyone was doing this in the franchise world, we didn’t find anyone with a pure estate-sale model of business,” says Debra, who retired from medicine two and a half years ago to work on Blue Moon, which currently has 11 units. “We thought long and hard about what keeps people out of this business and realized it’s that they aren’t sure how to determine what things are worth. That requires a fairly huge knowledge base. We realized that, collectively, we have enough experience to help with values or point them in the right direction.”

Things weren’t quite as clear for Fairbairn. “I guess the unusual thing for us was that the LED market didn’t exist when we started,” he explains. “We were one of the earliest players in the game. Then the market made a 180-degree turn. In 2008 and 2009, no big-box stores carried LED products. You had to know somebody. Now they are in every store.”

Fairbairn’s business has expanded from selling LEDs to educating customers on the possibilities presented by the technology and the vast differences in quality among products. But developing a franchise model for the concept was a challenge. Originally, Fairbairn expected to spend $150,000 to get LED Source off the ground. By the time the process was over, he’d laid out more than $1 million.

“I spent what I needed to spend to build the best system,” he says. “But I’m also stubborn. I made the mistake in the first few years of trying to ‘fix’ franchising. I always looked around and did not want to do things like other franchises. But I was wrong.”

In the past year, LED Source has added a strong team of franchise veterans. The company has also focused on inking deals with national companies and franchise brands to redesign and install their lighting systems, which means new franchisees will likely start out with installation contracts on day one. LED Source is also selling high-quality LEDs within some FastSigns locations, a move that should raise the system’s profile.

For Wafa and Jimmy Shamieh, the road to franchising emerged after the recession. What started as a hobby in the family kitchen has evolved into an 18-unit franchise called CREAM (Cookies Rule Everything Around Me), which takes a familiar treat—the ice cream sandwich—and puts it at the center of the freezer case.

Wafa was neighborhood-famous for her cookies, which she passed out freely to local kids. When she offered up her homemade ice cream, it was the kids who combined the treats, adding marshmallows, M&M’s and other candies to customize their ice cream sandwiches. 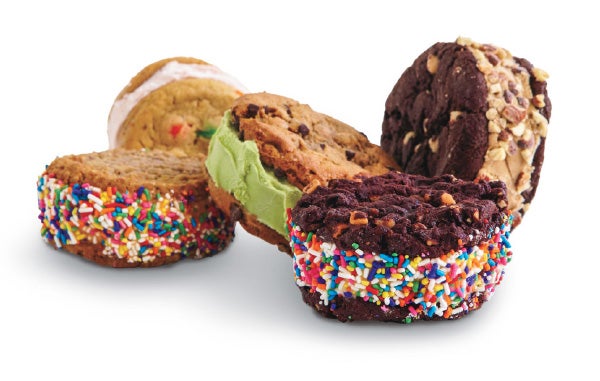 In 2008 the family businesses—several small groceries and a deli in the San Francisco area—started to struggle. The following year the Shamiehs, including son Gus and daughter Tagreed, rented an 800-square-foot space near the University of California, Berkeley, then hired some energetic counter servers, pumped up the music and opened CREAM, selling ice cream sandwiches made from Wafa’s recipes. Soon there were lines around the block.

“To me it’s fascinating how a labor of love or a hobby can turn into the next great thing,” says Jim Ryan, president and COO of the company, which he estimates will have 28 units open by the end of the year.

While copycats are sprouting up, Ryan says CREAM has several advantages besides being first to market. First, he says, the ice cream and cookies are of the highest quality, made to Wafa’s exacting standards. At the same time, the company is committed to keeping the price of a massive sandwich at less than $3; this means that affordable real estate and sufficient foot traffic are crucial to keeping the concept viable.

“We target our real estate efforts in the middle,” Ryan says. “People in lower demographics come up, and people on the higher end come down. A father of three can take his kids into CREAM with $20 and come out with change. That’s how we surprise our customers and make them feel good.”

When she put macaroni and cheese from her own recipe on the menu, it quickly became the fastest-selling item. Around the same time, a developer asked if she would consider opening a third full-service location of her restaurant. There were several smaller spaces available in the food court of a nearby shopping mall, where Platt believed she could test out her idea to serve mac and cheese exclusively. She says the developer’s eyes lit up, and they were off and running.

“I’m a systems-crazy person and thought I’d be good at putting together a fast-casual franchise,” she says. “So we threw our hat in the ring in 2010 and wondered why no one had done this before.”

The concept, which allows patrons to customize their macaroni with various cheese sauces and toppings like pepperoni, pesto, pulled pork, veggies and shrimp, has led to three franchise locations. Platman understands that her concept could easily be replicated, so she aims to expand quickly in the coming year, particularly in the Midwest. At the same time, she’s confident she can hold off would-be rivals.

“We’re going to get out and hold the front,” she says. “We’re the first to the field, and that will only help us. There’s a lot of synergy as we open more stores and people come across them.

“But our real advantage is that we’re chef-driven, and that will always make us stand apart,” she adds. “I’m always thinking about food. I can take a regional specialty, whether that’s Maryland crab and Old Bay or Texas barbecue, and figure out how to put it in our mac. I can do it faster and more efficiently than the other guys. And I really do think this is going to be the next big thing.”