Why the Bloomingdale's Ad Was an Inexcusable Marketing Mistake

By Sandi Krakowski November 16, 2015
Opinions expressed by Entrepreneur contributors are their own.

In a recent Christmas advertisement, Bloomingdale's startled the world and sparked a slew of complaints on social media.

A woman is laughing, with her head tossed back at a holiday party. The man on her right, however, is strategizing, and even has a creepy look on his face. The caption?

“Spike your best friend’s eggnog when they’re not looking.”

As a direct-response marketing copywriter, my first response was, “Who the HECK allowed this to be green-lighted?” Any project of this size has to go through four to six people to even go to print. So I’m wondering where the managers were on this case. I'm wondering where anyone was. 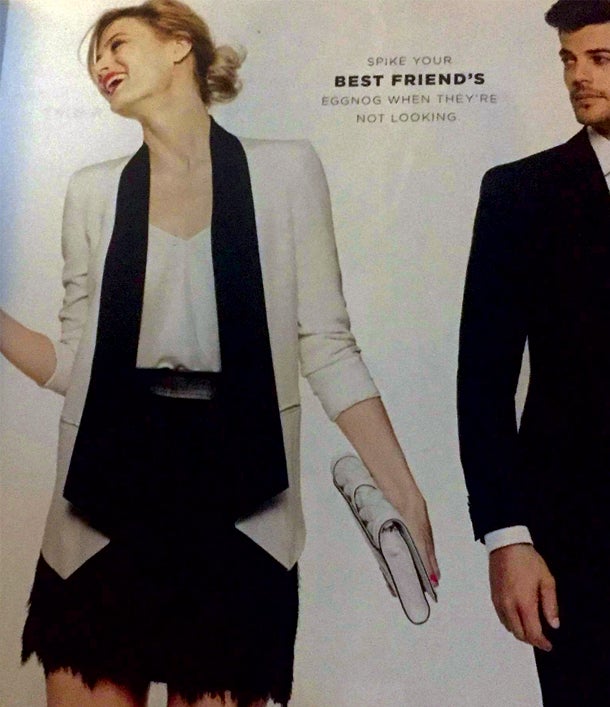 This advertisement, in Bloomingdale’s new holiday catalog, shows horrific judgment, lack of management and more. But it also reveals a problem our society needs to deal with head on: our attitudes about rape. Do we teach our girls to protect themselves? Or do we train up our boys to honor women and quit acting like they’re animals with no self-control?

Related: How Chronic Pain Made Me A Stronger Person

When I was 19, I was horrifically raped. Much to everyone’s surprise, it was a boyfriend. You could say, my best friend. The hardest part of the entire incident was when a few family members asked if I had brought it on myself. Questions like, “Did you dress appropriately? Did you ask for it?” came to the surface. After years of therapy, forgiveness and working through this horrific event, I will say that nothing I did provoked this horrific injustice and violation of my rights. A young man who couldn’t control himself and thought he was entitled to violate, dominate and rape me with his friends would forever scar my life.

When I saw the Bloomingdale’s piece I was not only shocked and sickened, I was even more upset when I saw the company attempting to apologize with a tweet.

We heard your feedback about our catalog copy, which was inappropriate and in poor taste. Bloomingdale's sincerely apologizes.

Really? You endorse rape and let such an ad go through your executive marketing team and all you can do is say, “It was in bad taste and we apologize.” I wonder if this would hold up when a woman is drugged and raped in court? Is it in "bad taste" when the man slips something into her drink when she isn’t looking and then rapes her?

Related: Why I Changed My CEO Salary to $1 a Year

Bad taste? That means you think this is a matter of taste. This gets more vile as we go.

It’s time for Bloomingdale’s to step up.

Social media is a place where we are more connected than ever before. But that doesn’t mean we should be so familiar that we don’t give the respect and honor that people deserve. Some might argue that for Bloomingdale’s to admit their horrific mistake, they could open up the door for further lawsuits. I’d argue, if they don’t apologize publically, with a video from the CEO and executives themselves, they further condone the belittling ad with their small behavior.

We live in a day and time when rape should no longer be the problem it is. It has no place in our modern society. The people on social media have agreed, loudly, with their outcry of opinions toward the ad.

We need to not only train our girls to be powerful and to protect themselves, but more importantly, we must raise up our boys to be powerful men who honor women and control themselves. This is faith at work at its finest.

Maybe -- and hopefully -- it would have changed the thought process of the marketing team at Bloomingdale’s if we took it more seriously.

Related: How to Shift Your Attitude at Work, on Even the Worst Days