Not Sure Why Your Newborn Is Crying? There's an App for That (Or a Few).

Imagine this. You’re a nervous new parent. It’s 2 a.m., you’re dead-tired and your newborn is screaming at the top of her tiny lungs. Sound the parental panic alarm. Step One: Figure out what’s making her cry? Step Two: Fix it and fast.

Or go the lazy route and leave it to an algorithm. Ignore your instincts, whip out your smartphone and launch Baby Cries Translator. It’s the latest iffy app designed to help fumbling parental noobs decode infant cries in their many nerve-rattling forms -- the hungry cry, the owie cry, the I’m pooped cry and, yes, the always joyful I just pooped cry purportedly included. 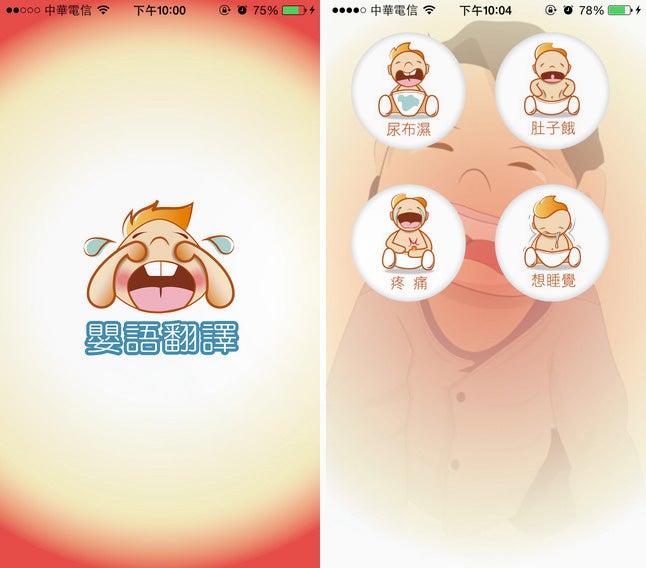 Related: Screaming Babies on a Plane? This Couple's Solution is a Poignant Lesson in Travel Etiquette.

Lucky for you, exhausted new mamas and papas, the app’s creator, Chuan-yu Chang, a professor at Taiwan’s National Yunlin University of Science and Technology, did the hard work of understanding your baby’s baffling shrieks and whimpers for you.

To create the machine learning backbone of the app, he enlisted researchers to record approximately 200,000 cries from 100 newborns over a 2-year period. Fun! Next, all the wee yelps and hollers were uploaded into a database in the cloud. Then Chang analyzed the screams to “distinguish the subtle differences in acoustics” with his colleague, Dr. Chen Si-da, Reuters reports. Chang claims the app boasts an accuracy rate of 92 percent among infants two weeks old or younger.

To use Baby Cries Translator, enter your bundle of joy’s birth date and, oddly, her nationality. Then press the app’s record button (at the bottom of a frowny-faced baby illustration). Gather your patience because you must capture 10 whole seconds of your mini-me emotionally coming undone.

The sound of her meltdown, hissyfit or what have you, will then be compared against the crying baby database. And, seconds later, you’ll know why she’s upset. Maybe. It’s on you to soothe her accordingly. There’s no app capable of replacing a mother’s or father’s unabiding love. Not yet at least and not ever, we hope.

Baby Cries Translator, launched last year and recently updated, costs $2.74 for Android in the Google Play store and $2.99 for iOS in the Apple App Store, along with a chunk of your parental pride.

Related: These 3 Baby Photos Mark Zuckerberg Shared on Facebook Will Melt Your Heart