'Cultured Beef,' Made From Harvested Cells, Could Solve Growing Global Demands for Meat

Stay informed and join our daily newsletter now!
Will be used in accordance with our Privacy Policy
Nyshka Chandran
Assistant Producer for CNBC Asia-Pacific
January 28, 2016 4 min read
This story originally appeared on CNBC


"Cultured meat" and a book that cleans dirty water are the latest innovations in food technology that could be key to sustainability in a world of finite resources.

Researchers from Germany and the U.S. revealed their solutions to surging meat demand and fatalities from waterborne diseases at the EMTech Asia conference in Singapore on Wednesday.

Maastricht University has developed "cultured beef," which is created by harvesting muscle cells from a living cow.

As these cells are nurtured, they multiply to create muscle tissue, which is the main component of meat. Biologically, this tissue is exactly the same as one that comes from a cow, explained Mark Post, chair of physiology and team lead of the Cultured Beef project at the university.

With global meat demand expected to outstrip existing livestock supply over the next few decades, according to the United Nations, cultured beef improves food security and saves animals, Post said.

"Technically, any species with stem cells in muscles can be used to recreate meat. We've worked on pork, others are working on fish and chicken but we've been focused on beef because cows have a bigger environmental impact," he said.

Livestock emit large amounts of methane, a greenhouse gas 20 times more potent than carbon dioxide, as part of their digestive process. Increased human demand for meat would significantly increase methane and in turn cause loss of biodiversity, Post warned.

"The world is facing a protein crisis, and it's implausible that we're going to eat insect protein or all turn vegan so this could be a helpful solution."

Cells taken from one cow could produce 175 million burgers, while modern farming would need 440,000 cows, according to his research.

Post stressed this his science had nothing in common with genetically modified organisms (GMOs), such as plants with altered DNA.

"The fear about GMOs is they may potentially produce invasive species through cross fertilization. This cannot happen with cultured beef."

Post's technology is a work in progress but the University of Oxford has already suggested cultured beef could use as much as 99 percent less space than is needed for current livestock farming methods.

Carnegie Mellon researcher Theresa Dankovich is the creator of "The Drinking Book," a combined instructional book and water filter.

The book's pages contain silver nanoparticles and when dirty water is poured on each page, live bacteria absorb the silver and die. Only tiny quantities of silver are used, releasing a minuscule amount into the water in the cleaning process, and producing drinking water that meets World Health Organization recommendations, Dankovich explained.

The paper is made from renewable and non-toxic materials and Dankovich hopes to implement an indicator, such as a change of colour, soon so users can know when they need to use a new sheet. 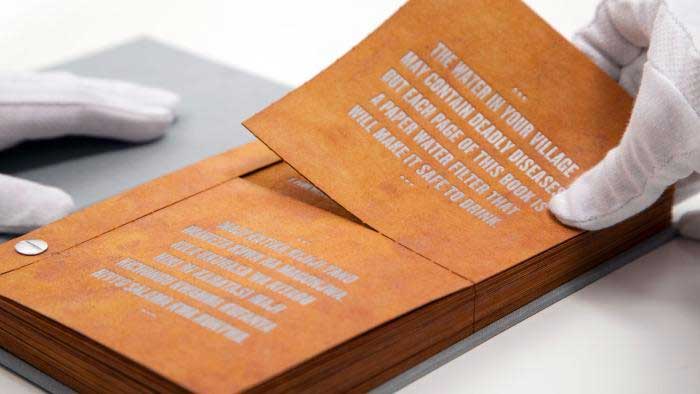 "We want this to be the next household commodity product. After doing a lot of surveys, we found that water filter papers are more important than dishes for many people," she said at Wednesday's conference.

One page of the book can provide 100 liters of clean water, enough for one person's needs for a month, she said.

Waterborne illnesses, including cholera and malaria, kill 3.4 million people a year, with many of the victims under the age of five, and is especially prevalent in rural areas with little access to potable water. But Dankovich's testing found the Drinking Book largely eradicated e-coli bacteria, a key cause of infection, in contaminated water.

The book serves an educational purpose as well, with information about contaminated water written on the pages using food-grade ink.

"The water in your village may contain deadly diseases but each page of this book is a paper water filter that will make it safe to drink," is one of the messages.

Dankovich hopes to soon use more pictures instead of words, however, to work around the issue of illiteracy. She eventually hopes to use the book as a way of also teaching people how to read.

Determining a price for individual pages or the book itself would largely depend on who it's being sold to, whether it's large-scale aid organizations or villagers themselves, she said, adding that sheets of paper could be sold for as little as pennies.

5 Ways to Inspire Creativity and Innovation in Your Employees