Exclusive: The Secret Thoughts of Americans and Europeans

What would you talk about if you weren’t afraid what people would think, you were anonymous and/or speaking with strangers? How different are your deepest secrets from the person next to you or in a different city or country?

Whisper, an anonymous messaging app headquartered in Venice, Calif., helped us answer those questions. Whisper has more than 20 million monthly active users in 187 countries. All of those millions of users share their innermost secret thoughts with each other. And none of them know who they are confessing to. It’s a club of secrets for anonymous members, and so, in theory, Whisper provides a safe space for users to be honest about their feelings, fears and hopes.

Whisper mined tens of millions of these secret comments and generated two word clouds exclusively for Entrepreneur. The size of the words in the graphics is a reflection of how much more a word is mentioned compared to the other. For example, in the European word chart, the word Manchester is especially large. Manchester is both a city in the U.K. and one of the most popular soccer teams in the world. The word is hardly used in the U.S.

But first, a note on what is purposefully excluded. Love is the number-one most-searched word on Whisper globally. Humans everywhere are obsessed with love, sex and relationships. We all want to know who likes us, why, who our lover might like better, how we compare with other lovers and what other people are doing in bed.

A few recent headlines on the Whisper blog, generated with responses culled from the app itself, include “16 Times People Got Wildly Adventurous In Bed” and “22 Secret Confessions People Keep About Their Relationships.”

For our word clouds, Whisper removed the words about love and sex, because they are equally popular in both the U.S. and Europe. Had they been left in, the two word charts would both be filled with words about love and relationships. The goal of our research is to see how Americans and Europeans think differently.

But Whisper is used for more than confessing elicit sexual encounters. In fact, there’s a pretty broad array of topics that users chatter about. For example, Americans talk about the “mall” and “tacos.” Europeans, meanwhile, talk about “rugby” and “stockings.” Have a look at the two word clouds, embedded below, that represent the different topics whispered about in the U.S. and the E.U. 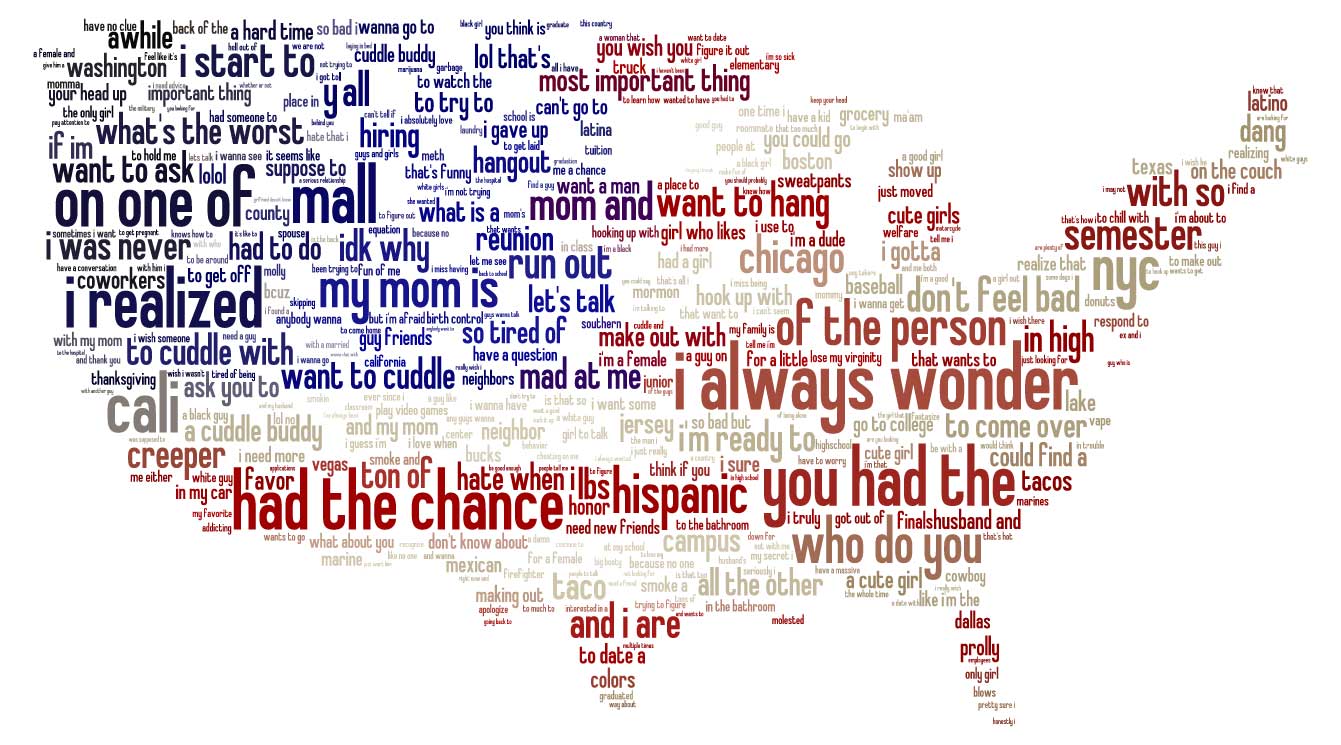 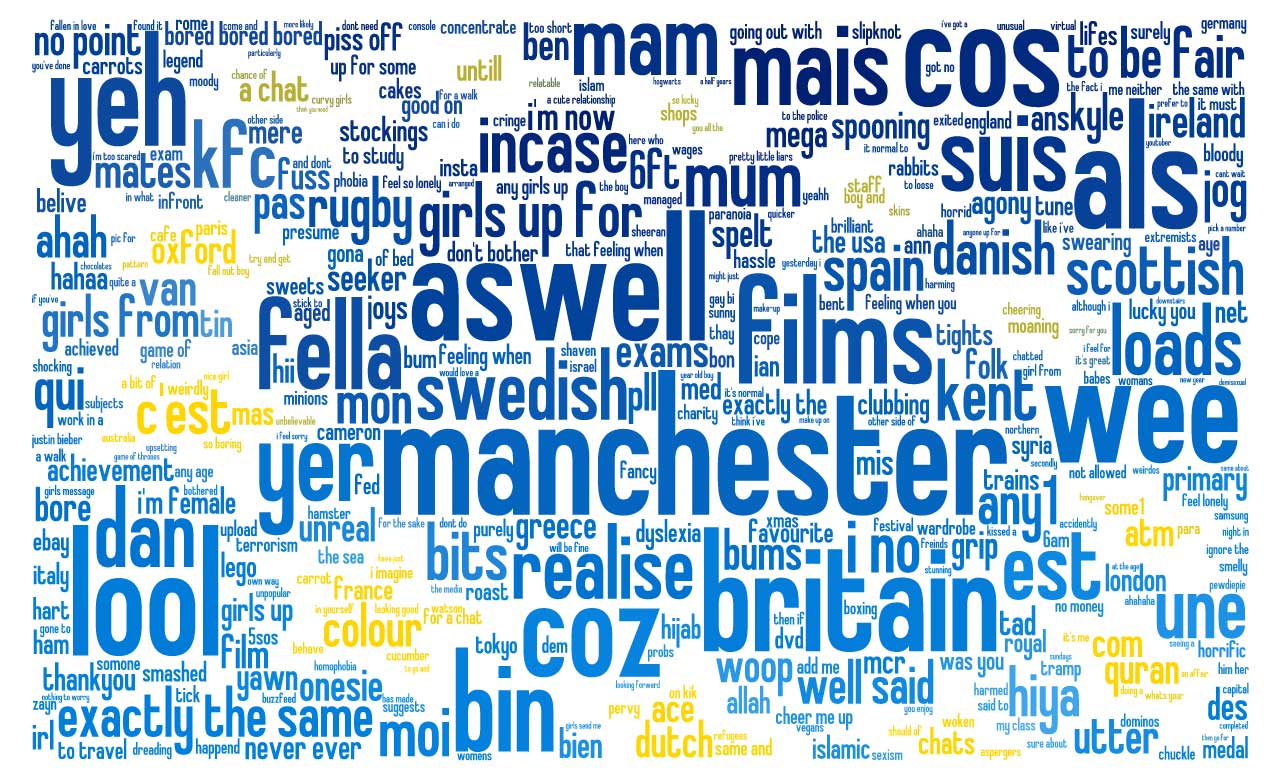 Whisper separated the words into categories. For example, all of the words that have to do with “work” or “fashion” were grouped together so that we could observe trends across the Atlantic.

The one topic that was talked about more in the U.S., and overwhelmingly so, was education. Americans talk about school 600 percent more than they do on the Whisper app in Europe

Some of the differences in what people talk about could, certainly, be explained by age. A person still in school is very likely talking more about school than someone who isn't. However, Whisper is an anonymous chatting app. The whole point of talking on Whisper is that your identity is hidden. Whisper does not know the age, gender, name, email address, phone number or profession of any of its users. The only data that Whisper does have is where a user is located. And that is only for those users who opt-in, actively allowing the messaging service to track their geolocation.

Whisper is free for users, but it is generating revenue. (The company declined to disclose profits.) That’s because knowing the innermost desires of consumers is big business for brands.

Whisper presents questions to its users on a branded background, explains Aishwarya Iyer, the director of communications at Whisper. The company that sponsors the post gets access to the authentic user-generated responses of Whisper users on the branded background. For example, Coke sponsored an anti-bullying campaign on Whisper that generated the images embedded below. 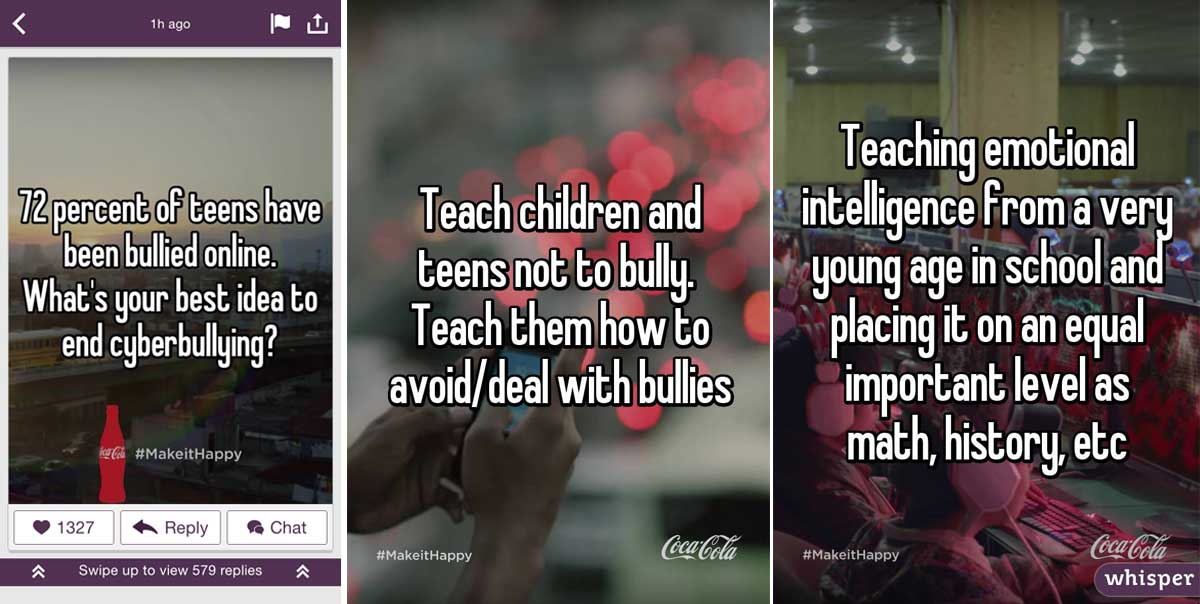 Going forward, Whisper will continue to push to expand internationally. Whisper just launched a Spanish-language version of the app catering to users in the U.S., Mexico, Columbia, Argentina and Spain. Also, Whisper says it will continue to partner with brands.

Growing an app based on anonymous, free expression is not without its challenges, however. When people are posting anonymously, there is very little motivation to be kind.

Whisper has 100 people offsite, outside of the 75 employees at headquarters, working to moderate the content posted on the platform. Anything deemed to be defamatory or bullying is removed.

“We have a golden rule: don’t be gross, don’t be mean and don’t use Whisper to break the law,” Iyer says. “We believe in authenticity, but it comes with responsibility, especially when there is anonymity layered on top.”