Is It Worth Flying Business Class? What I Learned by Spending $180,954.38 on Airfare

This contributor has been offered board seats, speaking engagements, consulting gigs, business-ownership opportunities and invites to country clubs and exotic homes.

By Neil Patel November 16, 2016
Opinions expressed by Entrepreneur contributors are their own.

I spend a ton of money on airfare. This week, I tallied up my airfare expenses since the beginning of the year. And I found that I had dropped more than $180,000 on business-class tickets to locations around the world.

That amount might make some people cringe; for me, however, it’s a logical decision. I spend big bucks on airfare, because it makes me money.

I’ve made nearly three times the amount that I spent on airfare. Plus, I’ve formed connections and forged relationships that will give me even more value down the road. I’ll tell you exactly how I did it.

1. I travel to places that make me money.

First, let me be clear about my purpose for travel. I don’t just travel for pleasure. I travel for business. If I’m asked to go somewhere, I make sure that the value of the opportunity is greater than the cost of getting there. That much is a no-brainer.

Sure, sometimes, my clients pay for my airfare, as a professional courtesy. Usually, however, I foot the bill myself. Traveling takes a lot of time. I make sure that the time I spend is well worth it.

If my flight doesn’t have wi-fi, I’m basically unemployed.

Thankfully, most airlines today have inflight wi-fi for business class. This is important for me because I plan on being productive while I’m traveling. I always travel with my phone and my Macbook.

I stay active on my phone as long as possible. As soon as the pilot issues the all-clear, I bring out my laptop and get on wi-fi. The first thing I do is open up email to plow through my inbox. Second, I open Microsoft Word to make progress on some blog articles. I also keep Skype open so I can chat with my team.

Seating arrangements on business-class international flights make it difficult to meet more than just a few people, but I’ve found that there are three times to “network” on the flight: First, I network while people are getting settled into their seats. Passengers naturally exchange greetings as they are putting away carry-ons or unwrapping blankets.

The second opportunity I used to use occurs at the end of the flight. Most people are eager to get off the airplane, so it’s not always easy to start a productive conversation. That's why I stopped.

Related: 6 Ways Entrepreneurs Can Stay Productive on an Airplane

The third and best time to meet people is during the first meal. Business-class flyers often take advantage of the alcoholic beverages, and they’re open to meeting people. Food also tends to improve people’s mood.

And these opportunities can yield results: I met a principal of the insurance group Allstate this way. After a brief conversation, we sketched out the terms of a $595,000 consulting opportunity that he wanted to give me.

I work when I can, but meeting people is usually more profitable.

One of the great things about business class is the bed, like ones I've tried on Emirates flights.

The airline's beds are surprisingly comfortable, and I’m able to sleep well on planes. After they reach cruising altitude, the cabin lights dim, and people quiet down. Flight attendants won’t nudge you to take your dinner order, and your cabin mates are respectful if you want to go to sleep.

I also often travel in my pajamas. Why not? Besides, I can sleep a lot better.

I’m used to getting eight or more hours of sleep a night, so keeping up with my sleep on an airplane is important for me. When I arrive at my destination, I’m usually rested and ready to go.

This quality of sleep doesn’t happen if I fly coach. Some people might be able to use those neck pillows and feel rested, but I'm not one. I’m only as successful as I am rested. Getting my sleep on an airplane has financial ROI. It allows me to get right back to work the moment the plane lands. 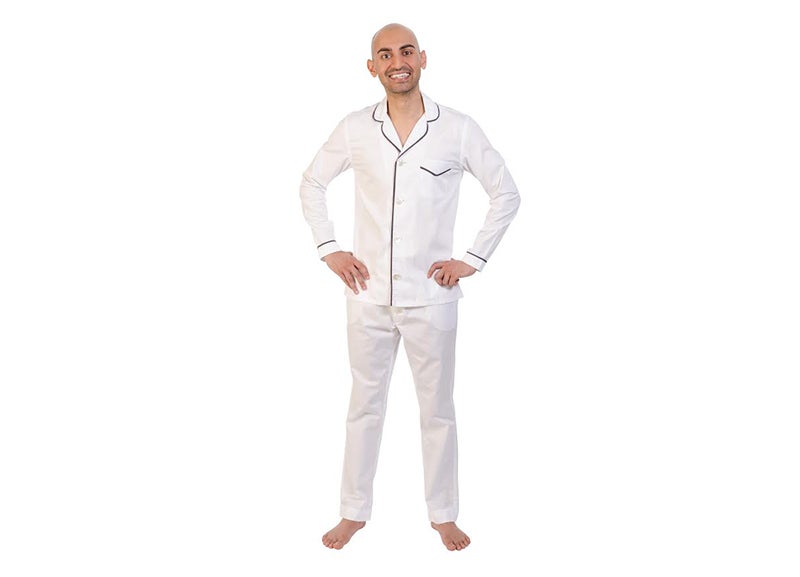 If you and I sit next to each other on a flight, I’m going to talk to you.

Once, I introduced myself to a guy while flying from San Francisco to Las Vegas. He asked me the typical question, "What do you do?" I wanted to take a nap, so I tried to end the conversation quickly by saying,

Oh, I work at Microsoft. What about you?

"I work in the construction industry," he said. "I have a handful of kids, so I stay pretty busy."

The conversation could have ended there. I was tired, but I tried to be polite by saying something nice,

Wow, that must be pretty intense -- working construction while providing for a big family,

You know -- some stuff around analytics and data.

"Have you heard of KISSmetrics?" he quickly responded. "It was co-founded by a guy named Hiten Shah."

I was the other “co-founder” with Shah, but my seatmate probably didn’t recognize me. (I look a bit different now.)

Yeah. I’ve heard of it, I replied. I’m the co-founder. Hiten Shah is my brother-in-law. And, I don’t really work at Microsoft. I just say that, as it’s easier than explaining what I really do.

He stared at me for a solid five seconds. Then he laughed and said: "Well, I’m not really in the construction industry. I mean, I do work around it, but I’m actually a tech entrepreneur. I buy and sell web businesses."

We went on to talk the entire flight.

His name was Jonathan. And Jonathan turned out to be an amazing business connection. He introduced me to his friends at The Carlyle Group and gave me shares in one of his companies that was later sold. We ended up working together on several deals. He even sent me a $3,000 bottle of Louis XIII Cognac.

That single conversation was financially meaningful. I learned something, too:  Always introduce yourself to people, even if you want to take a nap.

Now, I talk to everyone I can on my flights. Am I trying to be annoying? No. I want to learn from you, help you and get to know you.

Airport lounges are amazing places, for one reason; and it’s not the seats. It’s not the shrimp, either. Or the alcohol. (I don’t even drink while traveling.) It’s the networking opportunities.

Usually, coach tickets don’t get you lounge access. So I fly business class and make sure I show up for my flight early enough to spend at least a half hour in the business-class lounge.

A random encounter in a Lufthansa lounge in Frankfurt gave me a $50,000 speaking gig with an automotive company in the United Kingdom. The person I met there was an executive at a car company. He was trying to get his marketing team to figure out how to generate more leads from their website.

This is an example of why a lounge is an expensive perk but a wise investment. By going to expensive places, you make high-value connections.

If you know me, you know that I don’t have a problem spending money on nice clothes.

Like airfare, my clothing choices are a calculated business decision that deliver big-time ROI. For flights, I drop the Burberry suit in favor of something more comfortable -- tailored pajamas, for example, or some nice jeans and a shirt.

Sadly, people judge others based on looks and I have found that the more well dressed I am, the more meaningful meetings I have with people. It works every time. This also applies to luggage: I use luggage like a Rimowa carry-on and a Tom Ford briefcase. (I never check my luggage.)

On one flight from Brazil to Seattle, I had a short layover in Miami. A gentleman in the lounge complimented me on my briefcase. We ended up talking. He was an executive at Microsoft (luckily, I didn’t tell him "I work at Microsoft," LOL). We talked business, and he showed me how my business was overspending on cloud computing by at least $40,000 a month.

He even discussed how he could get me a large discount on Microsoft’s cloud service, Azure, because mine is a small business. (I considered the offer, but my tech guys would have had to spend too much money to switch.)

So, there it is: another example. Right there -- the briefcase, the lounge, the business class ticket -- could have paid for themselves many times over.

I’ve flown hundreds of times. Every time I do, I learn something. Usually, the learning happens when I meet people and get to know them.

I tried the private jet charter company, JetSmarter, for $12,000 a year. It could potentially save money on airfare because the company offers “unlimited flying.” But, for me, the routes weren’t convenient, and seat availability was limited.

I also even leased a helicopter for a while. (My friends called it "the Patelicopter.")

Yet using these alternative means of transportation didn’t provide the same opportunities to meet people and learn. With JetSmarter, most of the people I met were partiers. On the helicopter, I was networking only with the pilot.

For this reason, I realized that I prefer to fly commercial, because there I learn the most. And, for me,  knowledge is priceless. (Plus, I can’t afford to buy my own plane.)

The very best thing I learned

The most valuable knowledge I ever gained on a flight was flying between Seattle and London. I met an investor who taught me his exact business-acquisition strategy. In essence, he showed me how to buy companies and get someone else to finance the dealso you don’t have to use any of your own cash.

He even went so far as to introduce me to a few people who could finance deals for me. It was a long process, but it eventually worked out. His advice not only saved me cash, but it allowed me to grow my business faster without risking my own money.

I wouldn’t have had this opportunity if I had decided, “Hmm. I can save $3,000 if I fly coach this time!” For me, not flying business class is a risk, because I lose potential income.

When you begin to see travel as an opportunity instead of an inconvenience, you approach it in a new and valuable way.

I will make valuable connections, form friendships and improve my network. This has happened dozens of times. I’ve met influential businesspeople, senior board members, top-level executives, popular entertainers and industry movers and shakers.

As a result, I’ve been offered board seats, speaking engagements, consulting gigs, business ownership opportunities, executive positions and invitations to hang out at country clubs and exotic vacation homes.

Few if any of these conversations would have happened if I had tried to save money by flying coach and waiting in the general boarding area.

It takes time and patience to get to the point in business where business-class flights are available to you. One of the mistakes people make, however, is waiting too long before they take advantage of this opportunity.

Related: Vital Travel and Health Tips for the Suitcase Entrepreneur

I’m not guaranteeing that you’ll meet Mark Cuban or land a CEO position on a business-class flight. But you might be surprised at what does happen when you change your perspective and give it a try.