Why American Greetings Had My Favorite Booth at CES

Out of all the things I saw at the show, this stood out the most.

The Las Vegas Consumer Electronics Show, or CES as it is better known, is all about more advanced, sleeker and powerful pieces of technology. But the one company that stood out the most to me creates a product that doesn't plug in or have a battery.

American Greetings -- the Cleveland-based maker of greeting cards -- totally caught me off guard with its effective and poignant #DeviceLikeNoOther campaign. The company started teasing its presence at CES a few weeks before the show by saying this new "device" has the "ability to deliver the most powerful messages," has "unlimited capacity for memories" and "won’t catch fire when you charge it. Only if you light it on fire."

I correctly guessed to a company representative that the "device" was a greeting card. She remained coy. I continued to think the whole idea was lame.

Related: The Coolest Things I Saw at CES 2017

The company hired Parks and Recreation actor Nick Offerman and Randi Zuckerberg to be the faces of its CES campaign and hooked me in with interview opportunities with both.

Then I actually visited the company's booth and the campaign clicked for me.

American Greetings drew a large crowd both times I visited. People sat at tables picking out greeting cards (some specially made for CES) and worked with company writers and designers to craft a message to their loved ones.

In this age of texting and Facebook messages, I had never sat down for a few minutes to convey a message. I bet that's the case for many others.

"Even with all the texting and emailing systems that we have, you can't really convey a sentiment with as much impact as you can with a handwritten greeting card,” Offerman told me. “When you give a card, not only are you saying, 'I took the time to choose this card and write it for you,' but you're saying what it says on the card.’” He cheekily added that providing a greeting card even in the worst of circumstances, such as getting fired, can help lessen the blow and “is a form of affection, because it's saying, 'I didn't just can you, I care enough about you to say it in a card.'"

Related: 23 Lessons on Sales, Marketing and Funding it Took Me 20 Years to Learn

Zuckerberg shared that out of 100 entrepreneurs featured on her show, Quit Your Day Job, one had sent her a handwritten thank you note.

"It just stood out in my mind so much, because no one had ever sent me a handwritten card thanking me for anything in business before," she told me. “I remembered him so much that I kept going back to him for future projects and then ultimately invested in his company.”

This isn't the first time American Greetings has conducted a publicity stunt. In March during SXSW, the company hosted an event called “Analog." The message it tried to convey there was that digital creativity starts with analog thinking.

"Coming to CES allowed us to reach and connect with a new audience who we know appreciates the ability to have those meaningful connections, but may not having been thinking about it," said Alex Ho, executive director of marketing at American Greetings, in an email to Entrepreneur. "So we first got attention by being a bit cheeky -- coming to a conference where they introduce the latest high tech devices -- and then showing people how to stay connected through a paper greeting card and the still relevant power of that medium."

Even a cynic like me thought the campaign worked. I brought home three greeting cards: one for my girlfriend and two for co-workers. My girlfriend was delighted seeing her name expertly printed on a card and my cheesy message of love.

Related: YouTube's Highest-Paid Star Just Trolled Everyone. Here's What You Can Learn.

And my message of appreciation for my co-workers was well received. One said that she appreciated that I took the time to be thoughtful in my apologetic message for being a "CE … Ass." (I worked with American Greetings senior writer Greg Vovos for a few long minutes on that pun. I suggested "shell being seeing you soon" for another person's card that featured a snail.) 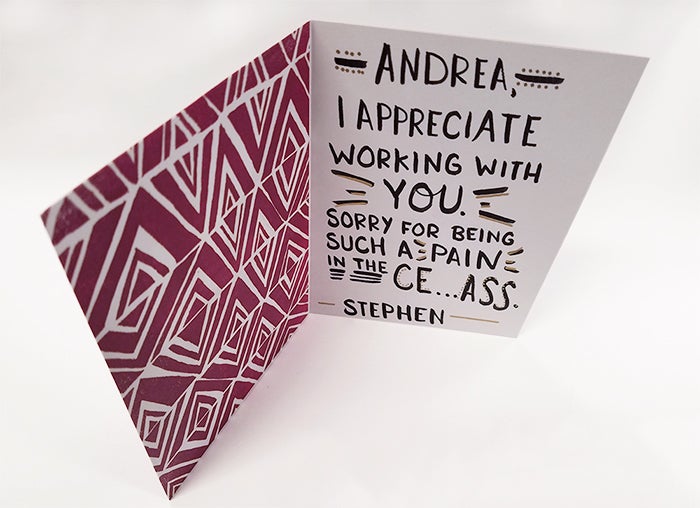 The first is to be creative in how you get your brand out there, but always stick to your core mission.

The other is that people appreciate any gestures in which you dedicate time to, including, of course, handwritten notes on a thin piece of cardboard that cost you a few dollars.