Got Your Post-Death Checklist? Grace Can Help.

By Sophia Stuart February 17, 2017
This story originally appeared on PCMag

Until fairly recently, death and dying were subjects usually hidden from view. But the digital age has opened up new possibilities for end-of-life organization, from figuring out advance directives, hospice decisions and funeral arrangements to contacting financial institutions and gathering documentation.

One such possibility is a tech startup called Grace, which connects people to end-of-life information and services online. It's the brainchild of Alex Kruger and Annie Luchsinger, and is currently in testing mode at Cedars Sinai in Los Angeles.

The business model now requires providers to pay to be listed after a screening process conducted by the Grace team. Kruger and Luchsinger want to keep Grace free to families and build on their directory of providers with a suite of online tools to help patients and families navigate what needs to be done, from one central resource.

"The more we talk to families, the better our product can become," said Kruger. "Grace is the intersection of solutions, a triage system if you like, from connecting with quality hospice or senior care providers, to an after-death checklist. Our goal is to be the catalyst for solutions no matter what point you are at when making difficult life-stage decisions."

Right now, the majority of traffic comes from desktops, as families gather around to use Grace as a starting point for tough conversations. The future might get more mobile as individuals take control of their own plans ahead of time. 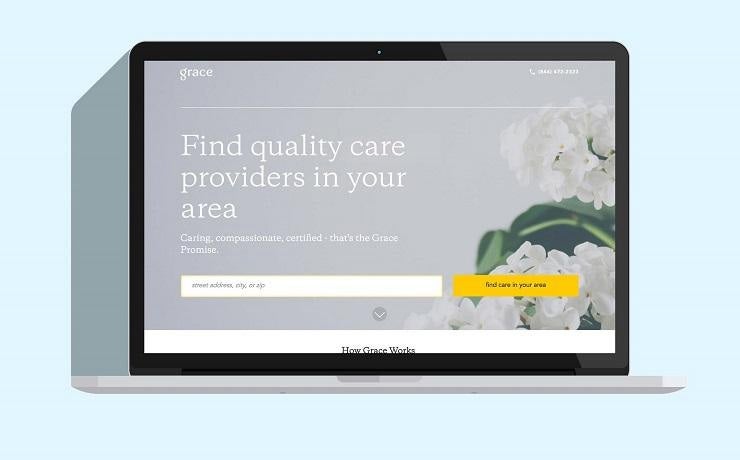 Grace got its start on the East Coast under a different name, Attendant.

"Two things happened around the same time: I was working in another business and a friend mentioned the problems inherent in the end-of-life space. Then my great-uncle died," Kruger told PCMag. "I didn't have a good understanding of what it takes to sort out everything from closing out accounts, talking to providers, getting affidavits of domicile, and so on. I asked my family how I could help, and the idea for a digital solution began to emerge."

Kruger had been looking for a new business idea. After stints at a Shanghai biopharma company and IBM, he moved to the startup world and worked for Belly, Fooda and SpotHero. But he wanted to branch out and started Attendant to explore the end-of-life space.

Not long after, Luchsinger joined him as Attendant's first hire from HitchSwitch, a newlywed name-changing company; she'd also previously worked as a buyer for Rue La La.

The duo decided to reolocate from the East Coast to Los Angeles. "We wanted to be somewhere that has a digitally forward population, where people are open to using a service like Grace, that's online. California made the most sense to us," Kruger said.

They applied to the Techstars program, which mentors promising startups, and were accepted into the Boulder, Colorado, program. There, they rebuilt the idea as Grace in partnership with Cedars Sinai.

"It was through [Techstars] that Cedars Sinai found out about us," Luchsinger told PCMag. "They were looking for a digital-first company, with a new mindset and method, to help their patients and their families navigate end-of-life tasks.

"They thought Grace might be a really interesting fit; we applied and got in, joining the Techstars Healthcare Accelerator 2016. We emerged with an innovative pilot that allows any patient or family member experiencing an end-of-life event at Cedars-Sinai to call us for guidance and assistance."

"The pilot has been live since July 2016," added Kruger. "Available initially as a resource through their Inpatient Specialty Program, but it expanded rapidly. Grace made awesome waves throughout the hospital and we now get referred by staff in the Emergency Department, ICU and beyond. The goal is to jump in, to have those tough conversations and provide clarity about who to trust in the end-of-life space."

What's next for Grace? Luchsinger said they hope to be in four additional geographic areas by July 2017 with new content above and beyond the directory. "We're also starting to aggregate and acquire reviews of providers, and will be building that in next year," she confirmed.

Having been through several surgeries myself, including one life-threatening one, I could not have been admitted to a hospital without providing an Advance Directive, my end-of-life instructions. It was a deeply odd situation sitting in my attorney's office, setting out under what circumstances I'd let doctors unplug me from life support, and it got me thinking about how you sort out all the administration required post-death. Using a service like Grace from the comfort of my own home would have given me peace of mind. It's a welcome solution to wrapping everything up neatly before one does have to depart.