Time to Accept Artificial Intelligence as Part of the Family?

Millions of households are welcoming these new voice-first home assistant devices into and as part of their families -- even with all the uncertainties and unintended consequences.

By Peter Gasca March 13, 2017
Opinions expressed by Entrepreneur contributors are their own.

By now, many of us have heard about or might even own one of the popular, sleek multi-functional voice-first devices, such as the Amazon Echo, also known as "Alexa", the name used when waking the device to give a verbal command.

Quick joke: How do you make Alexa laugh?
The answer: You can’t, because you can’t push her buttons.

This joke is terrible for many reasons, not the least of which is that I ended up anthropomorphized a digital device, which may be one of the biggest issues with this devices.

Related: There's No Doubt That Amazon Alexa Is the Next Big Thing

First, according to Voice Labs Voice Report for 2017, 6.5 million voice-first devices -- defined as an always-on piece of hardware utilizing artificial intelligence (AI) with primarily a voice interface, both for input and output -- were shipped in 2016. In 2017, that number is estimated to grow to 24.5 million devices shipped, thanks in large part to its appearance during the Super Bowl commercials.

These numbers are extraordinary, especially when you consider that the Echo was only introduced in 2014, followed only by by its smaller brethren, the Echo Dot and Google Home in 2016. 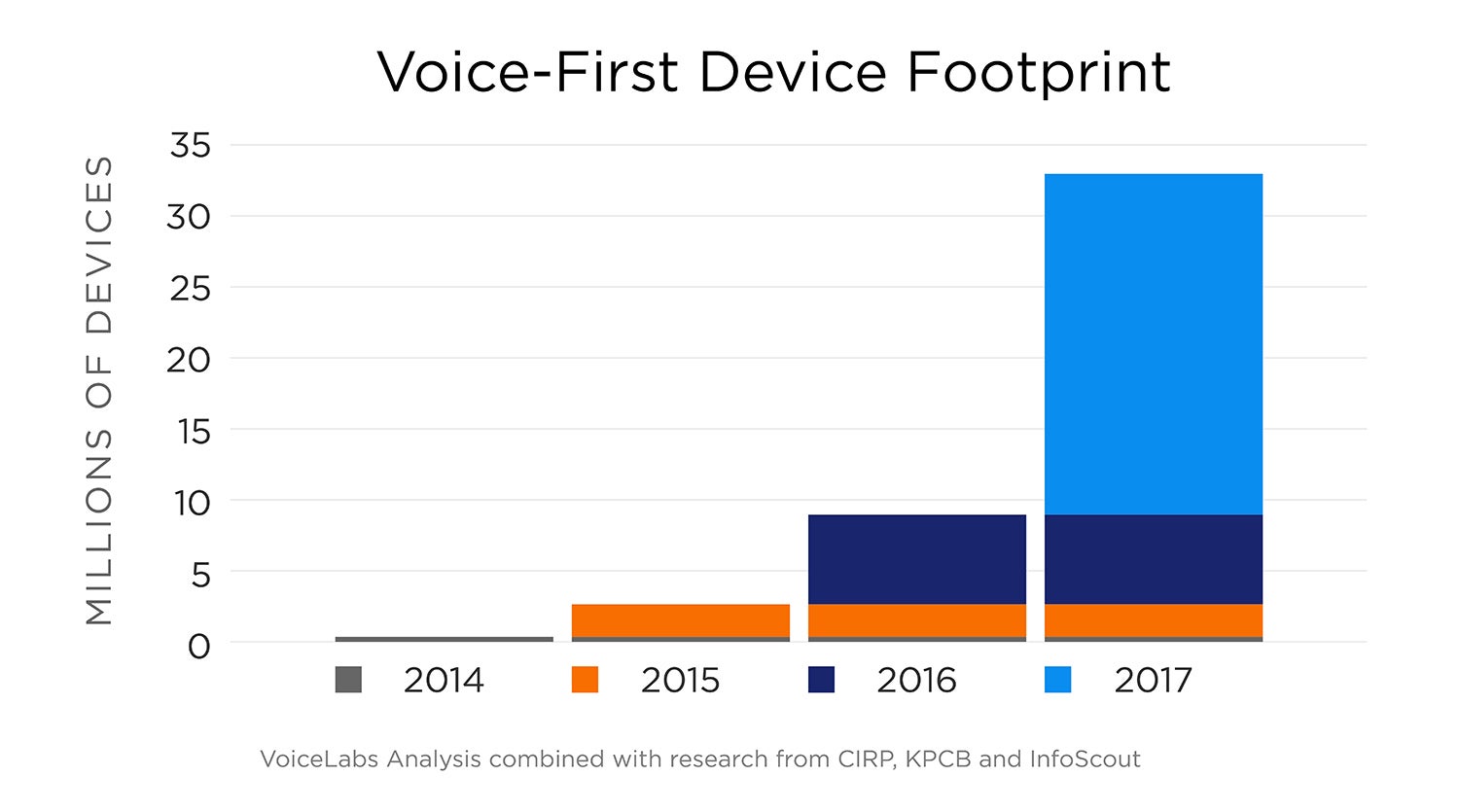 While Amazon and Google (and Siri on our iPhones) have an early lead in this sector, there are sure to be new entrants. In fact, the entire sector will be interesting to watch as a lesson in super-niche focused products and services, which is turning out to be a smart business move.

According to Voice Labs, these AI assistants are already highly specialized and will become more so in 2017. Here are predictions for the strategies of just the big players:

The crazy thing is that even with the potential for 24 million devices to be in our homes soon, the potential impact still remains remarkably unclear. Adding to this uncertainty are the following unintended consequences resulting from the rapid adoption in our lives.

One thing is for certain, the popularity of these devices is certain to grow. As for me, I am still a little wary of being an early adopter of this technology. I may be convinced, however, if the AI software can be taught to laugh at my bad jokes.

Peter Gasca is an author and consultant at Peter Paul Advisors. He also serves as Executive-in-Residence and Director of the Community and Business Engagement Institute at Coastal Carolina University. His book, One Million Frogs', details his early entrepreneurial journey.

3 Entrepreneurial Uses of Artificial Intelligence That Will Change Your Business

This Is How AI Content Marketing Will Shake Up 2022