Facebook Adds Nearly Everything Snapchat Does to Its Main App

By Nicole Lee March 28, 2017
This story originally appeared on Engadget

Facebook's quest to mimic Snapchat is undeniable at this point. In just the last few months, Instagram, Whatsapp and Messenger have all integrated some form of Stories -- a disappearing slideshow format that Snapchat is famous for -- while Facebook Live dabbled in Snapchat-esque selfie filters.

Now, after months of experiments and tests, it's time for the main Facebook app to get in on the action too. Today, the company is officially rolling out three new Snapchat-inspired features to its core app: a brand new in-app camera that's chockful of filters, effects and masks; Facebook's very own Stories; and Direct, which lets you share photos and videos with specific people for a set period of time.

As soon as you launch the updated Facebook app, you'll see the new Stories navigation bar prominently featured at the top. On the far left is a shortcut for Direct sharing, the second bubble is for Your Story (you can tap it to add to it), while the rest are Stories of your closest friends. Each Story interface is almost identical to that of Instagram's version -- you can move back and forth through the slideshow by tapping left or right, and if it's your own Story, you'll be able to see the number of views as well as the names of the people who saw it. Additionally, you'll be able to leave direct replies on other people's Stories, which then appear on top of the content. The replies only live as long as the content, however, so once the photo is gone, the comment's gone too.

"We've been very text-centric in the past," says Connor Hayes, a Facebook product manager. "But what we've been seeing is that the way people create content is changing, from text to photos and videos. [...] We're trying to upgrade the app to be more centered around the way people are behaving and creating the content in social apps. And that starts with the camera." 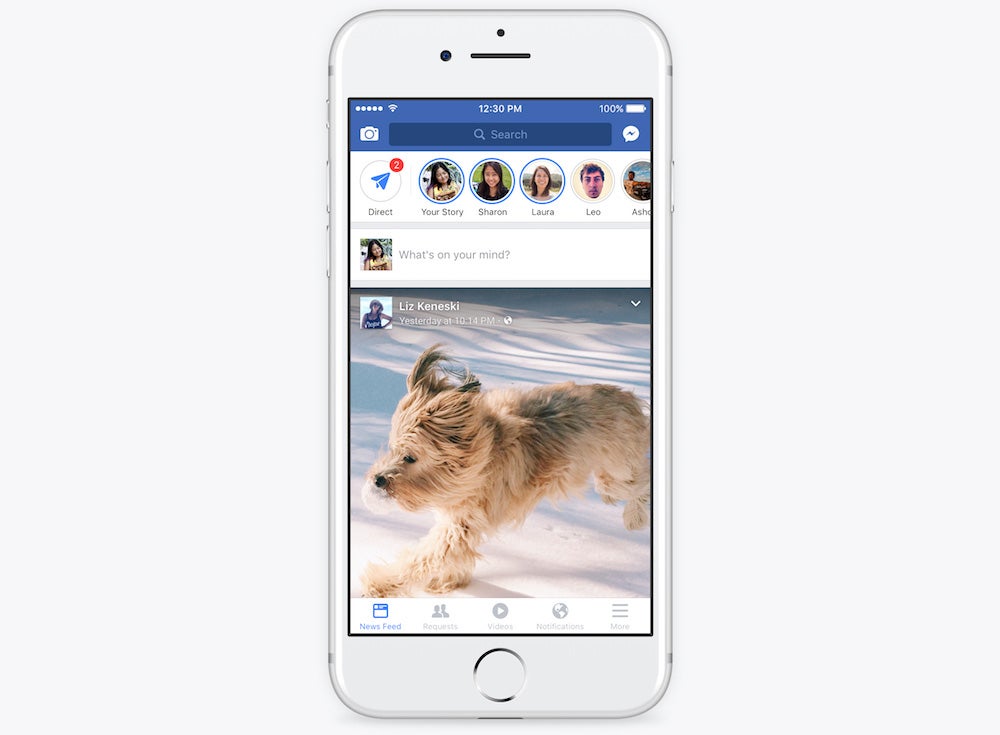 Which explains why the new camera is much easier to access. Before, the fastest way to launch the camera in the Facebook app was to tap "Photos" and then select the camera icon. Now, that camera icon is located to the left of the search field, and is visible the moment you launch the app. Alternately, you can swipe right from the home screen, and that'll bring up the camera function as well.

The camera interface is completely different from before too. On the left side of the screen are little navigation dots, which correspond to different filters that the app has pre-selected for you. Simply swipe up or down to scroll through them, and you'll see the filter take effect on the main screen. These pre-selected filters are chosen based on an algorithm that susses out whether you'll like them, and also on your location. So if you're in London, you probably won't see a San Francisco themed filter, for example. 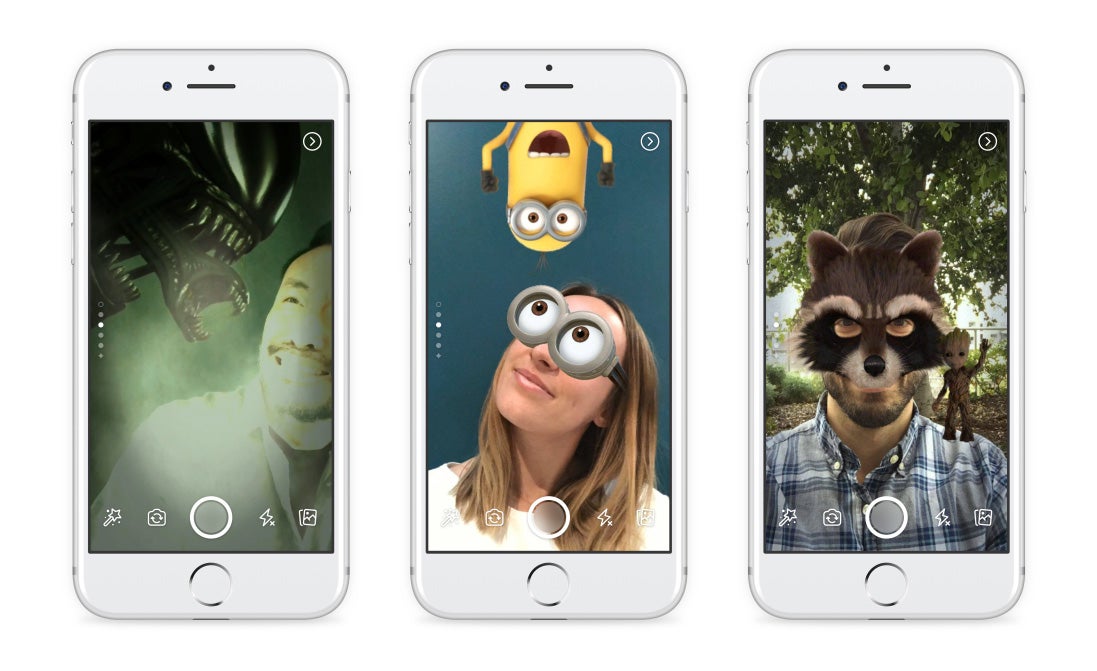 But if none of those filters strike your fancy, no worries, because you can tap an option that will reveal as many as 70 other options (that number will change depending on your region). You can choose anything from selfie masks to Prisma-esque style effects to simple frames. In a brief demo, I saw filters that showed animated pizza slices flying out of my mouth, round glasses superimposed on my face and a "I Miss You" message scrawled in front of me. Other options include a mirroring effect, one that shows a lazy sloth on top of your head, a mustache, a pride rainbow, a glitter beard and even an effect that makes you look like a minion from Despicable Me.

Indeed, Facebook not only partnered with different film studios for licensed content, it also commissioned two artists -- Hattie Stewart from the U.K. and Doug Coupland from Canada -- to come up with special artistic filter effects. One of Coupland's filters, for example, shows concentric colors radiating from your head. Open your mouth, and the circles now form in your mouth and on your forehead.

Kristen Spilman, the director for art and animation in charge of the camera effects, says that she hopes these filters help people express themselves. "Our new camera puts visual content at the heart of the Facebook experience," she says. "While we want our effects to be fun to use, it's more important that they're thoughtful and relevant in enhancing relationships." 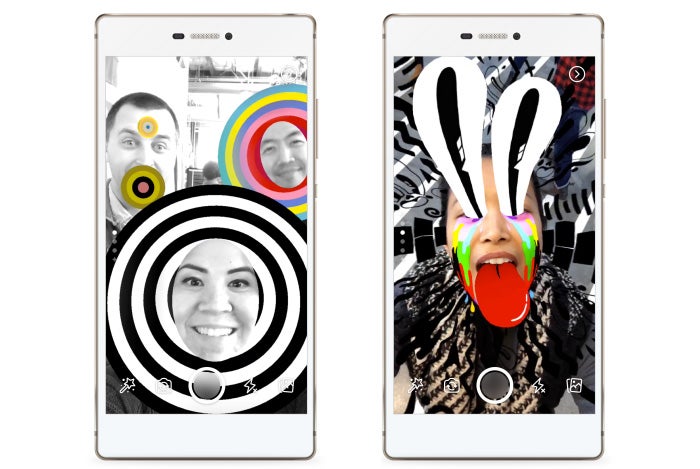 What I found particularly intriguing is that Spilman's small team of effects artists took pains to really make sure that the filters resonate with the local culture. For example, when the team tested visual text filters like "OMG" and "LOL" in Ireland, they found that they weren't really all that popular. But what did work were more regional examples like "Gas" (which translates to "astonishing") and "Some Craic" (which means to have a good time).

After you've chosen your filter, you can write text on top of it or doodle on it with your choice of brush. Then, you can save it to your camera roll and do nothing with your creation, or you can choose to share it. You can post it to Newsfeed if you want your photo to live on forever, or you can post it to Your Story if you just want it up for the next 24 hours, or you can share it directly with your friends via the new Direct feature. If you do send your photo or video directly, note that your friends will only be able to view it once and replay it once. Once it's over, it's gone. 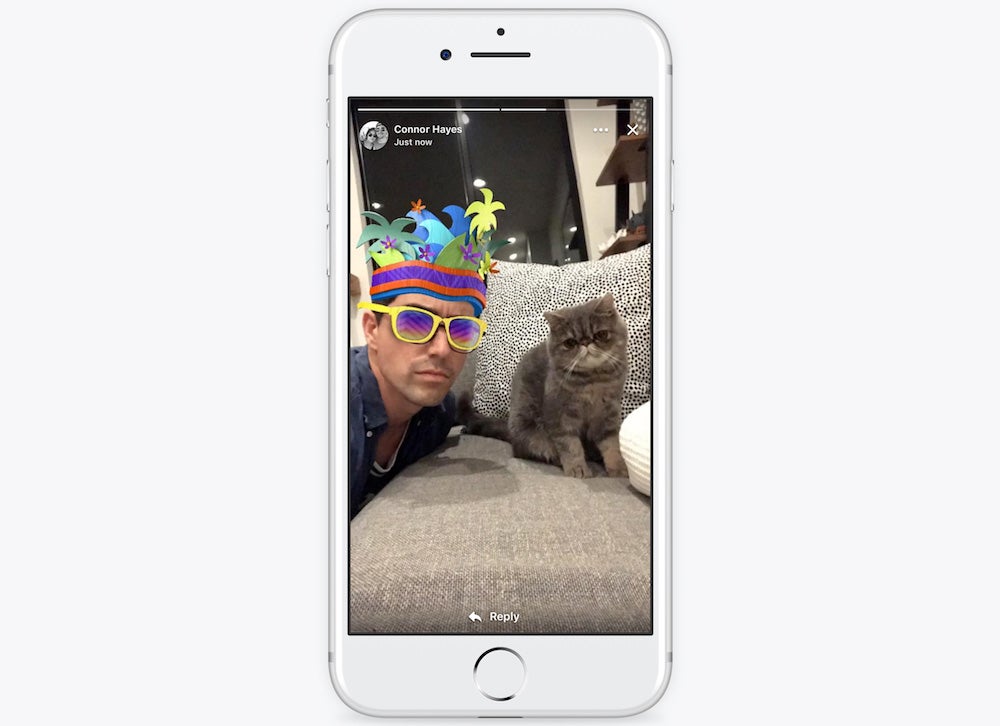 "Stories has become the format for people to create photos and videos and share them with one another immersively across social apps," Hayes says. "This is something that Snapchat's really pioneered. Our take is that Stories has become a format for people to share and consume photos and videos across all social apps." When asked why someone would use Facebook Stories over Instagram Stories or vice versa, Hayes says that different people use the apps differently. "It depends on how they use each app, and who their network is on each app," he says, pointing out that oftentimes the two have different audiences.

"Over the coming months, we plan to introduce new ways for the Facebook community to create their own frames and effects that can be used on any photo or video created with the new Facebook camera," said Facebook in a statement. "Our goal is for the camera to be a home to hundreds of dynamic and fun effects that give you new ways to connect with friends, family, and your community."

Facebook's new camera, Stories and Direct sharing will be rolling out to all users on both Android and iOS throughout this week.