The co-founders of MNDFL really believe in that whole 'service' thing -- and it's paid off for them.

My butt already misses the pillow at MNDFL. It was by far the most comfortable thing I've ever sat cross-legged on. 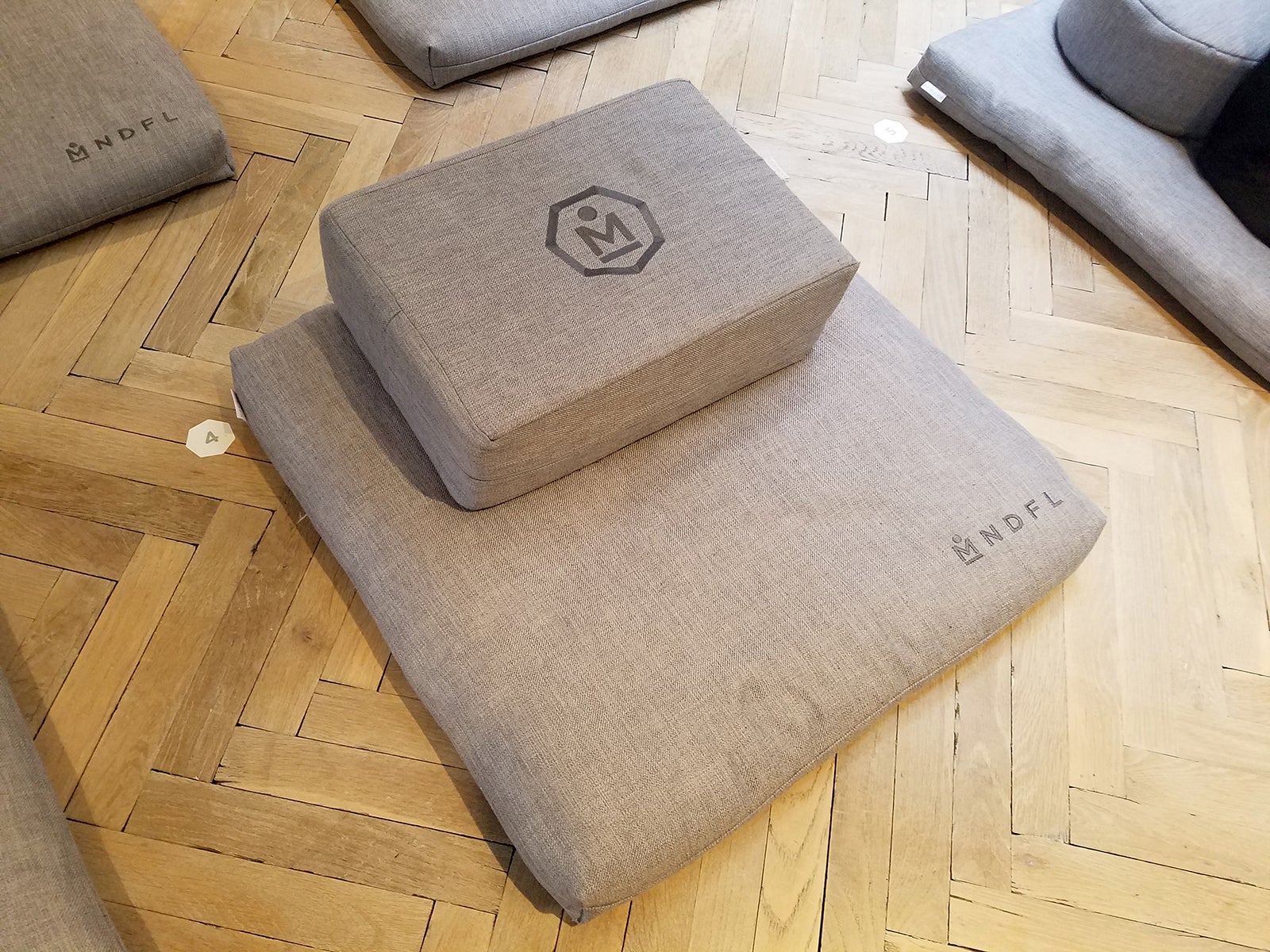 Posteriors aside, I recently visited the Upper East Side location of MNDFL, a meditation studio that first opened in November 2015 in Manhattan's Greenwich Village, to see if I can actually achieve inner tranquility in a group setting. And who doesn't want that? For city dwellers like me, constantly bombarded by depressing news and social media outrage, a brief reprieve from an existence as a walking ball of stress is more than welcome.

I've meditated a handful of times before, using the Headspace app in the safety of my home, with mixed results ranging from a high feeling to a slight sense of calm.

Of course, we all want to have better memories and be cool under pressure. But many people can't believe that sitting and staring into space for at least 10 minutes on a regular basis is the way to do that. In fact, though, research has shown that meditation actually creates positive changes in our brains. 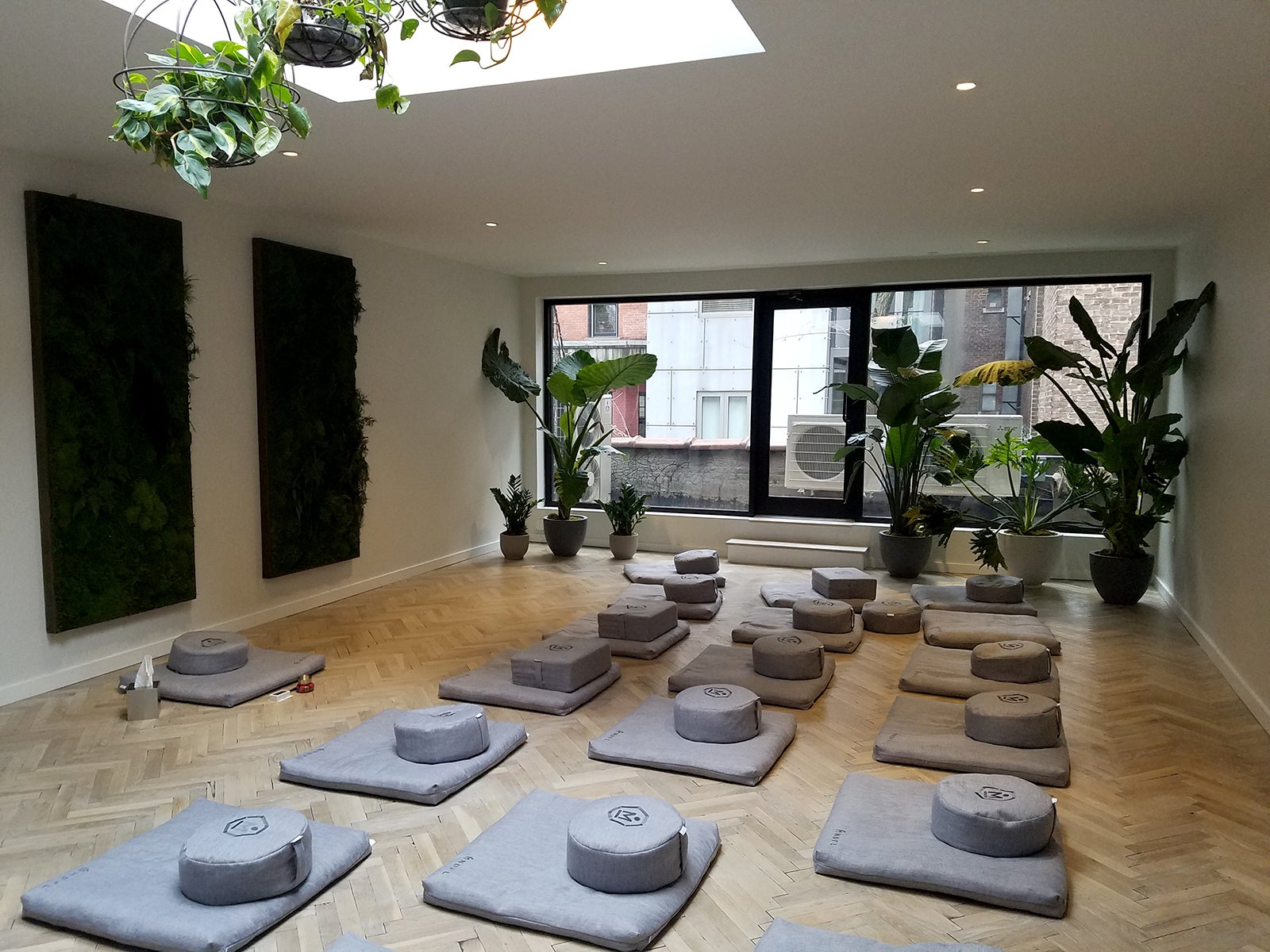 "We found long-term meditators have an increased amount of gray matter in the insula and sensory regions, the auditory and sensory cortex," Harvard neuroscientist Sara Lazar told The Washington Post. "Which makes sense. When you’re mindful, you’re paying attention to your breathing, to sounds, to the present moment experience, and shutting cognition down. It stands to reason your senses would be enhanced. We also found they had more gray matter in the frontal cortex, which is associated with working memory and executive decision-making."

I have yet to start meditation on a consistent basis -- just some sessions here and there -- but MNDFL co-founder Ellie Burrows says the regular practice can be powerful. She worked as a film executive when she had a "bit of a health thing" in 2008, she told me, which set her on a "journey of self-reflection and healing and interest in the breath." Burrows then "started struggling with meditation," as she described it.

"It's hard to hold yourself accountable and be consistent -- it's a practice for a reason," she said. "I was finding it hard to put my tush on the cush." Anytime she wasn't working, she said, was spent furthering her spiritual pursuits. "Then I realized I was kind of living a double life and I wanted to start all over again."

She quit her job in 2013 and traveled the world to places as far as Australia, Japan and the Himalayas in Bhutan. Upon her return, she received her coaching certification and started volunteering with the Institute for Compassionate Leadership, a nonprofit founded by Lodro Rinzler.

Out for tea one day, Burrows asked Rinzler if there were any places in New York that she could just drop in and meditate for a half-hour to an hour. He told her there weren’t, but there would likely be some soon. The pair decided to go forward with the idea themselves.

"I was just a lover and practitioner of meditation who was seeking the advice of a friend," she said, "and sort of walked out with a business partner, and that was totally unplanned."

The pair recently opened a third location, in the Williamsburg neighborhood of Brooklyn, so clearly their idea was sound. MNDFL employs around 30 trainers that work across its locations. 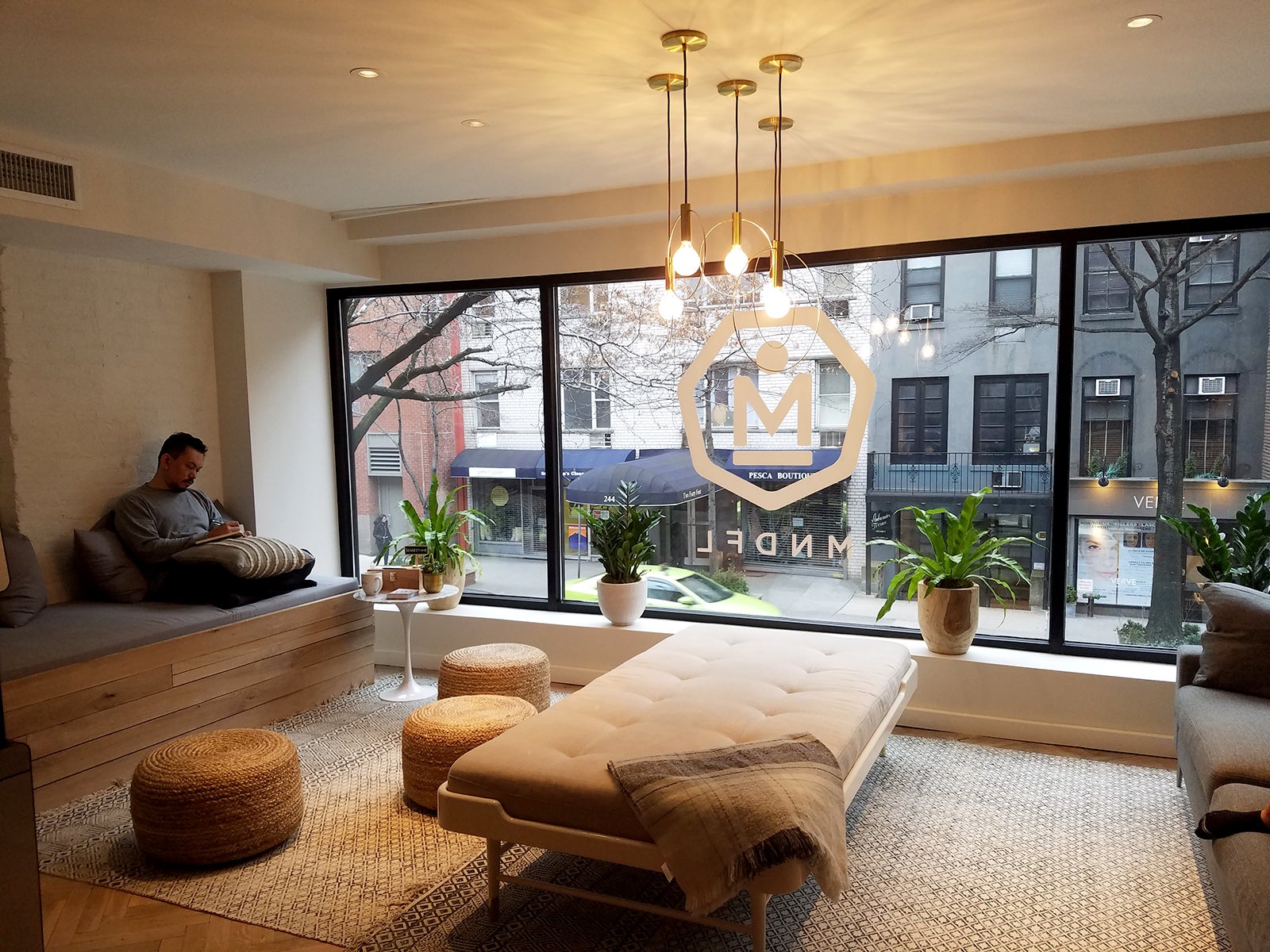 But back to those pillows. They were just one element of MNDFL's calming aesthetic. A mixture of wood and earthy colors can be found across the studio, from the reception area to the meditation space. There is also an abundance of green plants. It really conveys to visitors that you're in a safe space and to take a breath and calm down. Members are also invited to hang out in the lounge area, to drink some tea and read a book from a small library, if they ever need a break from the city.

I attended an 8:30 a.m. session on a Friday that focused on emotions and was led by Maho Kawachi. Throughout the half-hour session, Kawachi asked the handful of participants about their experiences with meditation and if they had any questions. She introduced the practice then led two five-minute periods of meditation, where she asked participants to stare at a space and focus on a single emotion.

I struggled to do this, mostly because I had too many thoughts: Which emotion should I focus on? Happiness? OK, happiness. But what if I'm feeling something else? Did I choose to focus on happiness just because? What are the other participants thinking about? Is anyone looking at me?

Given my prior experience with meditation, getting into it may have been slightly easier than if I were a newcomer. I can imagine other people worrying about whatever's popping up on the smartphones in their pockets (which should absolutely be silenced during class, by the way).

Just as I was getting into a good state, Kawachi rang the chime and it was over. But really, that's fine, she told the class. It's normal to focus on a lot of things -- that's how our brains work.

Even still, I definitely carried a sense of calm with me throughout the day. As I walked to work from the studio, I took slightly more time. I didn't put headphones into my ears to block out the sounds of the city. I may have been smiling more.

Just being there, knowing I was investing my time, helped force me to actually relax. And that's a great thing. In the shitstorm that is our lives, with social media, political upheaval and the increasing demands of work, we need to give ourselves the space to focus on ourselves. 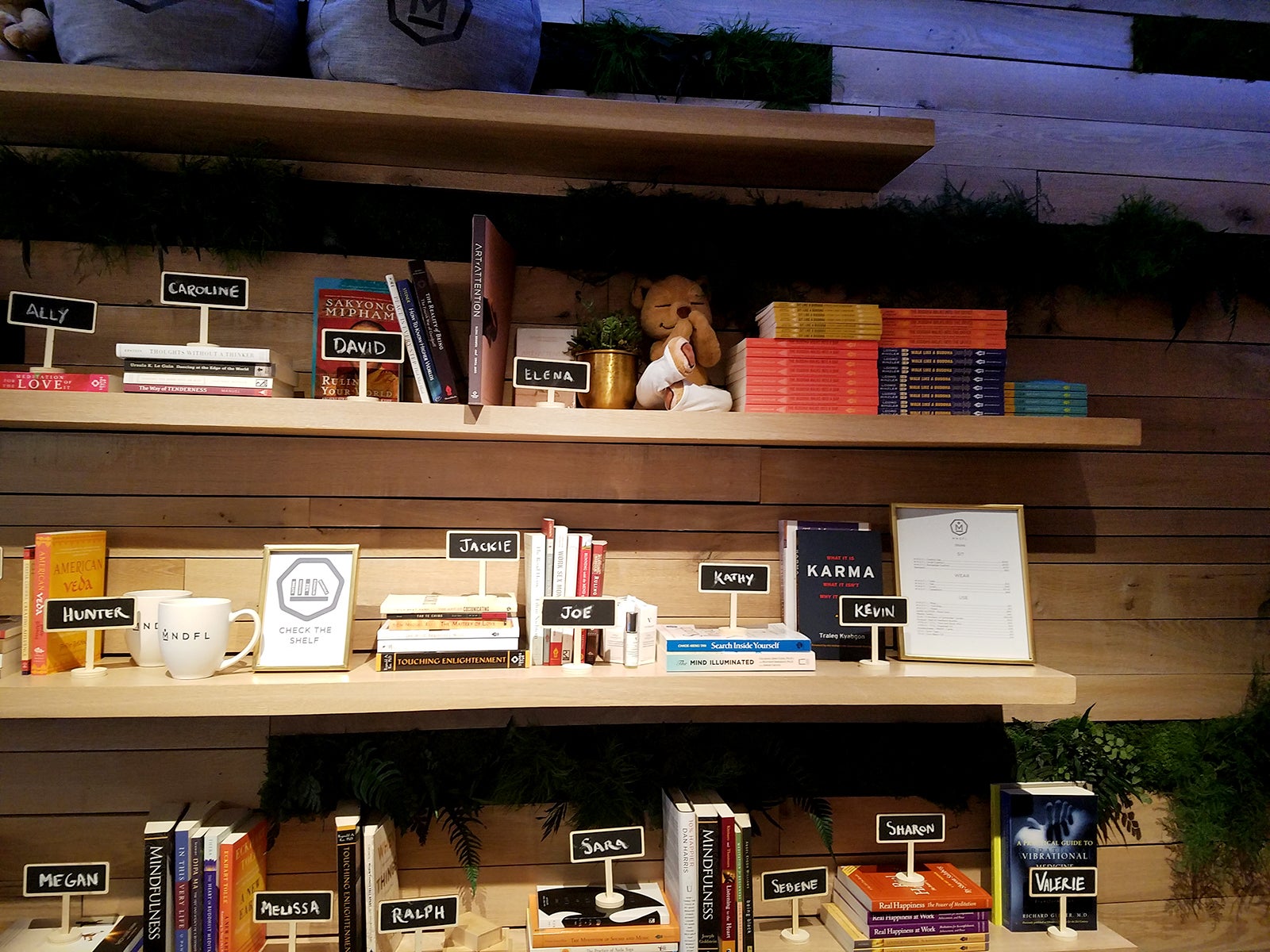 MNDFL has a library featuring recommendations from its instructors.
Image Credit: Stephen Bronner

Related: Why Meditation Works and How it Benefits the Workplace

Or, as Burrows, put it: "Even though I don't believe in control, I like the advice that true control comes from doing nothing."

Stop and think about that for a minute: "True control comes from doing nothing." Sure, there may be dozens of emails I could be reviewing, stories I could be thinking about or trips I could be planning, but attacking all of those things at once accomplishes squat. Start by doing nothing, then work up to doing one thing -- and that starts with giving yourself time to be with your thoughts.

Whether that's through a meditation studio such as MNDFL, an app such as Headspace or even sitting in a dark, quiet room for a few moments to clear your head, doing nothing for a little while is worth it.