Verizon says the speed discrepancies were related to 'network testing over the past few days to optimize the performance of video applications on our network.'

By Chloe Albanesius July 24, 2017
This story originally appeared on PCMag

Verizon customers this week reported speed caps on Netflix's Fast.com speed tool, as well as YouTube, according to reports.

As The Verge noted on Thursday, the issue first came to light on a Reddit thread in which a user said he was getting capped at 10 to 12Mbps on Fast.com, the speed test website Netflix launched last year, while tests on Ookla's Speedtest app produced results up to three times faster. Later, similar problems were reported on YouTube. Switching to a VPN service seemed to solve any issues.

"It looks like this might be a way of controlling load on congested towers," the Redditor wrote. He noted that "10-12 Mbps is good enough for 1080p60 and 1440p30, but is just enough for 1440p60," so most people wouldn't really notice. Still, "it's a bit unnerving that this is an unadvertised cap as a way to manage the network. [If I recall correctly], this wasn't disclosed anywhere on the Verizon Unlimited site."

Verizon did not immediately respond to a request for comment. But a spokesperson told Ars Technica that Verizon conducted "network testing over the past few days to optimize the performance of video applications on our network." Those tests, which the spokesperson said did not affect customers' video experience, "should be completed shortly."

In a statement, a Netflix spokesperson said "We don't cap data and don't cap for any mobile network. We offer settings inside the Netflix app to empower our members to control their own quality preferences and data usage."

At PCMag, one Verizon user got capped at 10Mbps on Fast.com on LTE, while the Ookla Speedtest app produced almost 28Mbps (below). 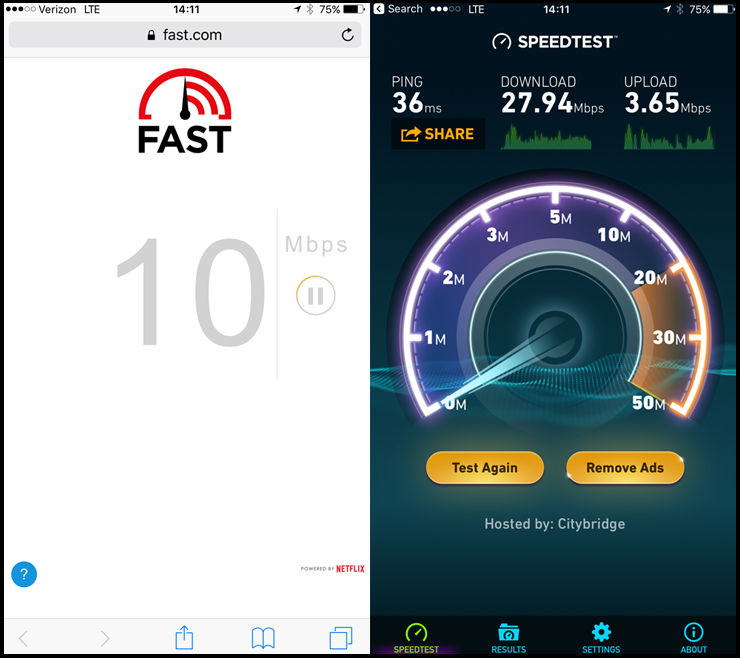 The news, however, comes amidst a renewed debate on net neutrality. The FCC under President Donald Trump is looking to reverse the rules put in place under the Obama administration. Current FCC Chairman Ajit Pai argues that they are unnececssary; ISPs can regulate themselves. Those who support the rules say that without them, customers will have nowhere to turn if their ISPs resort to shady tactics in the name of network management.

The internet thrived without heavy regulations, Pai has argued repeatedly. But this whole debate over net neutrality got started when Comcast was accused of throttling P2P networks like BitTorrent during peak times. Since then, ISPs have come out in support of net neutrality as a concept, but say they can handle things themselves.

On July 12, internet firms like Netflix and Reddit joined forces for the Net Neutrality Day of Action, which encouraged people to flood the FCC with comments in favor of the rules. The commission is expected to hold a final vote on the issue later this year.