One employee quitting led McClure's not only to hire a robot, but also to listen more carefully to its workers.

Pickles might seem like one of the simplest foods out there, but making them is hard work. McClure’s Pickles co-founder Joe McClure is no stranger to the arduous labor the process involves. He and his brother and co-founder, Bob, spent their childhoods helping their mom and dad with batches of their great-grandma Lala's recipe, and they used to run McClure’s production from their respective homes in Michigan and New York when they first started, before they moved their entire operation to their hometown of Detroit and scaled up there.

Still, in spring 2017, McClure had a wake-up call about the strain of making pickles when an employee quit because of it. The man had been responsible for lifting more than 500 40-pound boxes of full jars per day, sometimes moving them from the ground to a height of five feet to place them onto pallets. After three and a half years, he was worn out and in pain from the job.

“I took it for granted,” McClure says of his employee’s work, “because I’m not in that position all day.”

Related: These Are the Most Common, and Expensive, Injuries at Work

Despite distributing its products, which include pickles, relish, bloody mary, chips and brine, to more than 4,000 retailers in the U.S., the U.K., Australia and New Zealand, the company has just 33 employees today (plus eight seasonal workers). Many of them have been with the company for years. When someone quits -- and fewer than five people have done so due to injury over the course of 11 years -- the small team feels the reverberations. 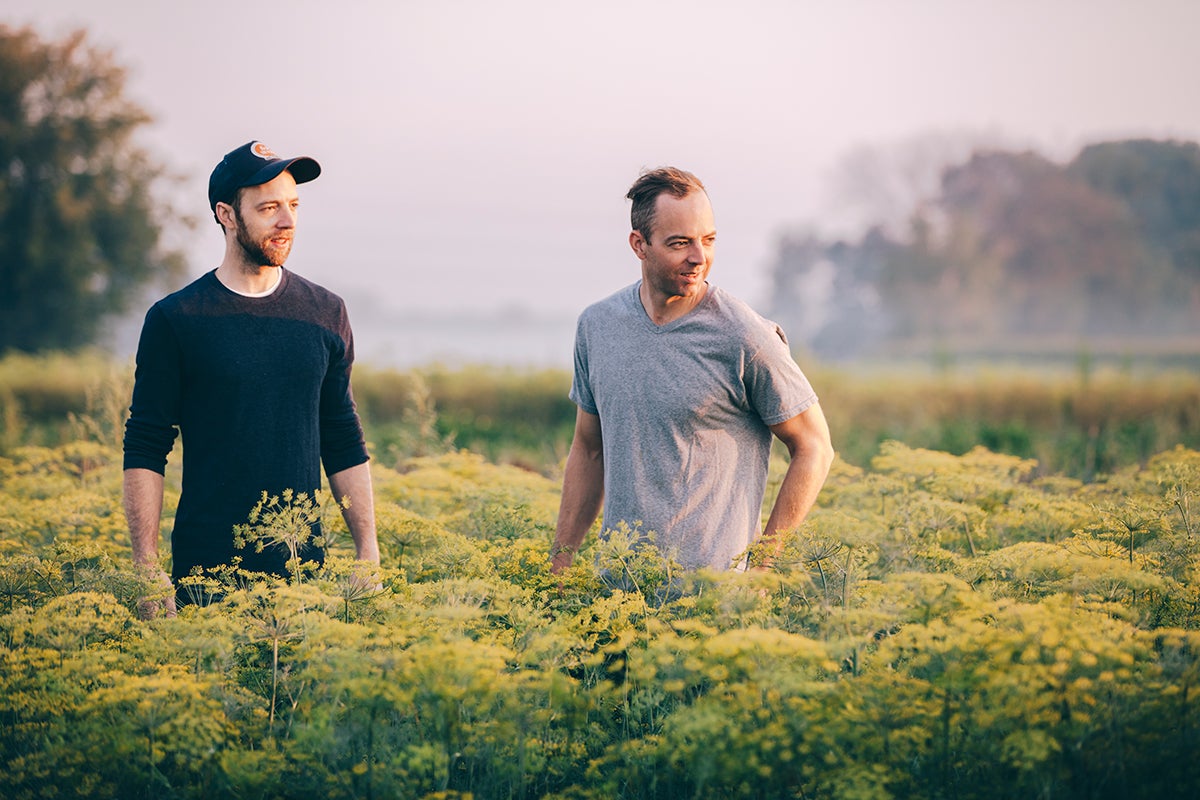 In addition to coming to terms with the unfortunate fact that an employee had been injured on the job and that the company would be losing a valued team member, McClure also was faced with hiring someone to do the same strenuous job.

This moment changed how McClure thought about not only the people running his operation, but also the machines.

The fix
All of the cucumber slicing, jar-filling and lid twisting that goes into pickle making takes its toll on the body. To combat this, the 11-year-old company has added machines to assist with some of that work over the years, with the goal of scaling the operation and while also minimizing tedious, sometimes dangerous tasks.

First, McClure’s added a machine, back in 2009, to add labels to its jars. Before this, McClure says, three to four employees would spend afternoons hand-labeling them and stamping each with a batch code. This created a huge bottleneck of jars waiting for the finishing touches before they could be shipped, and the company often couldn’t get orders out the door on time for this reason.

In 2010, the company purchased its first slicing machine. For the first four years, employees had sliced all pickles by hand, and while “no fingers were lost,” McClure says, time was.

“It was hard to prep and cut enough cucumbers for the demand that we had,” McClure says. “Our hours would get longer and longer, we weren’t fulfilling our ecommerce orders and customers would get upset.” Although adding a slicing machine dramatically reduced cuts and injuries, the primary motive for implementing it was to streamline the operation.

McClure’s later added brine-filling and lid-capping machines as a result of inefficiency, this time more directly due to worker injuries. These processes were previously limited by workers’ capacities to perform the jobs. The company had to rotate people out every hour throughout their six-hour shifts, assigning them to a different workstation in the facility while they recovered from the repetitive tasks of twisting lids and pouring heavy pitchers of hot brine. In addition to these forms of automation, the company has a conveyor to move jars from station to station. 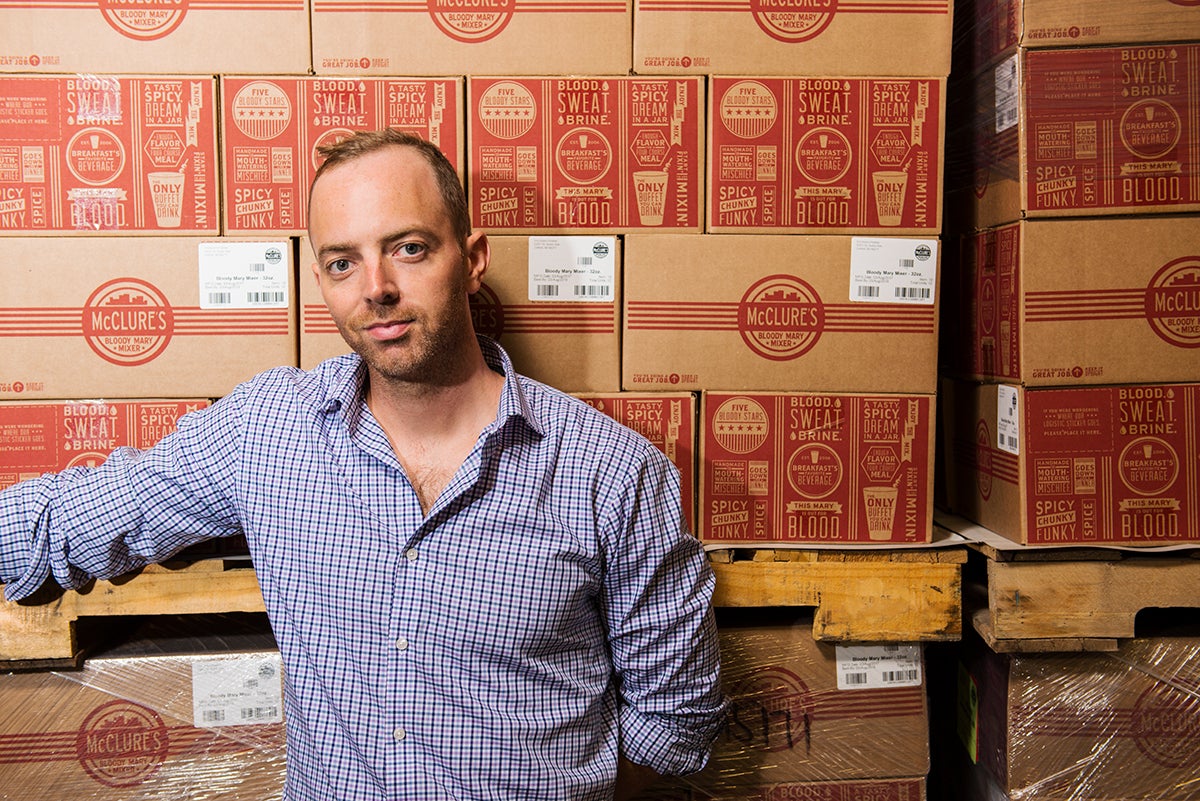 McClure's Pickles co-founder Joe McClure had a wake-up call when an employee quit due to back pain from lifting heavy boxes. He made it a priority to listen better to his team.
Image credit: McClure's Pickles

The next piece, though, will be McClure’s first robot, which the company expects will be working by January. It’s a robotic arm that will help with the box-lifting job. McClure did some research when his employee quit and came upon this solution. He says he hopes to learn how to program it, then teach employees to do so. That way, McClure’s won’t replace a human with a robot -- just a physically demanding job with a cognitively demanding one.

Related: Here's How This Company Is Adding Robots But Also Keeping Its Workers

The results
Remember the employee who quit six months ago because his back hurt? Well, McClure reached out to him, told him about the robot, as well as the opportunity to program it, and he told the company he’d love to give it a shot. Now, he’s back on board.

Automation has increased output for McClure’s without decreasing jobs, despite the fact that many people associate robots with job-stealing. When the company had just five employees and no automation in 2006, it produced 600 units of product per day. In 2010, with 20 employees and 20 percent of its facility automated, it was churning out 2,000 units a day, and today, with the robot still pending, McClure’s operations are 60 percent automated, and about 41 employees (including seasonal) produce 6,500 units a day.

Thanks to machinery that’s made production more efficient, as well as the longtime employees who have worked alongside it, the company’s sales have grown between 10 and 20 percent annually since its founding in 2006.

McClure adds, above all, when the box-lifter temporarily resigned, “a lightbulb went off” for him. It taught him the importance of listening to his employees and what their experience is like day in and day out.

“We have more frequent and regular meetings and a very open-dialogue environment, a roundtable with not only the managers, but a lot of people doing the mundane tasks,” McClure says. Issues that have come up include shift start and end times, sanitation concerns and equipment malfunctions. 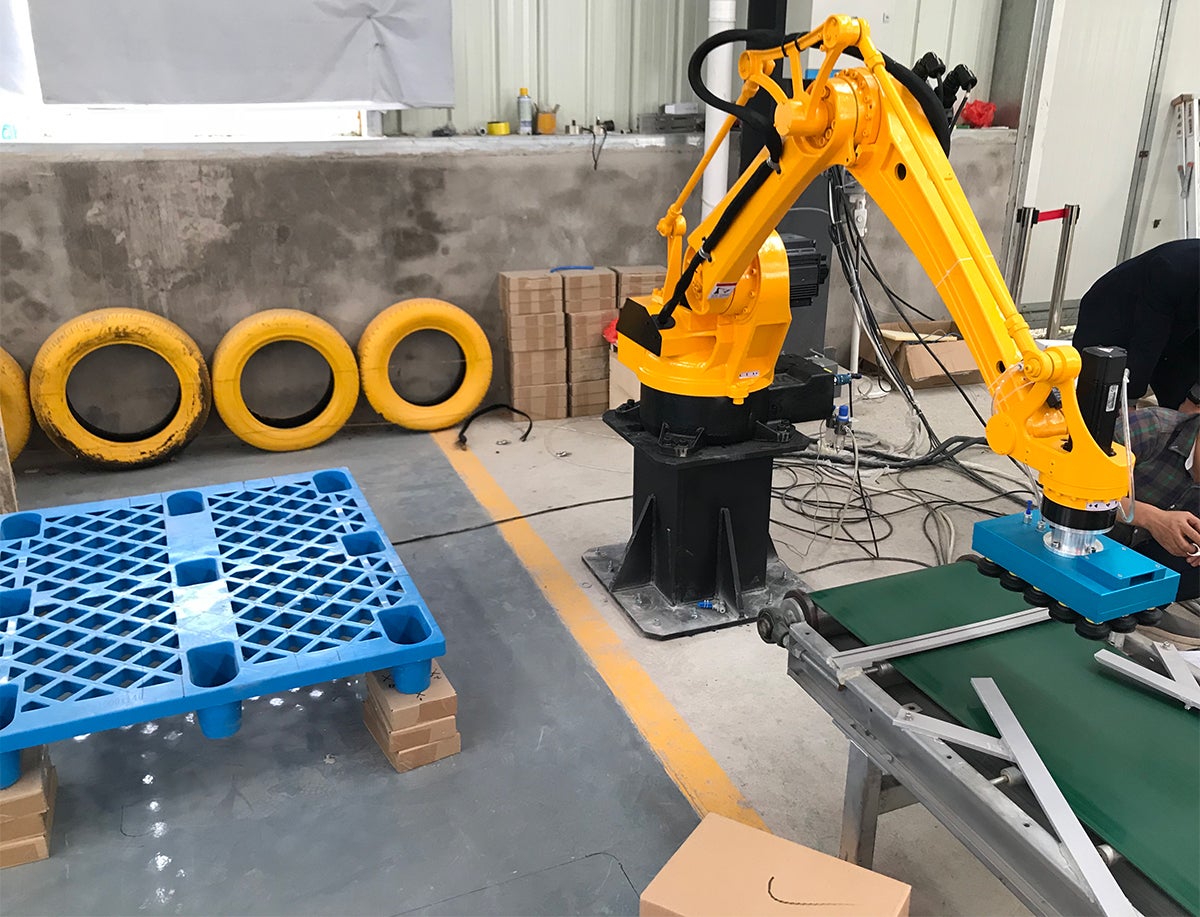 This is the robot that McClure's will add to help with box-lifting beginning in January 2018.
Image credit: McClure's Pickles

Sometimes, they might even launch a brainstorm about how to speed up an aspect of the production process. “The people doing it know the frustrations and can figure it out better than me sitting from afar,” McClure says, and with automation, he foresees hiring more workers that will be able to spend more time thinking about process efficiency than doing the labor itself.

He also says that his employees tell him they feel encouraged by improvements such as tools that make their jobs easier.

“If we stayed kind of stagnant and static, I think we would've lost a lot more people, because they wouldn’t have seen us changing,” McClure says. “We are a fairly rapidly changing company, and I think that helps retain a lot of the key associates. A lot of people on the production side have been here since we started the company.” 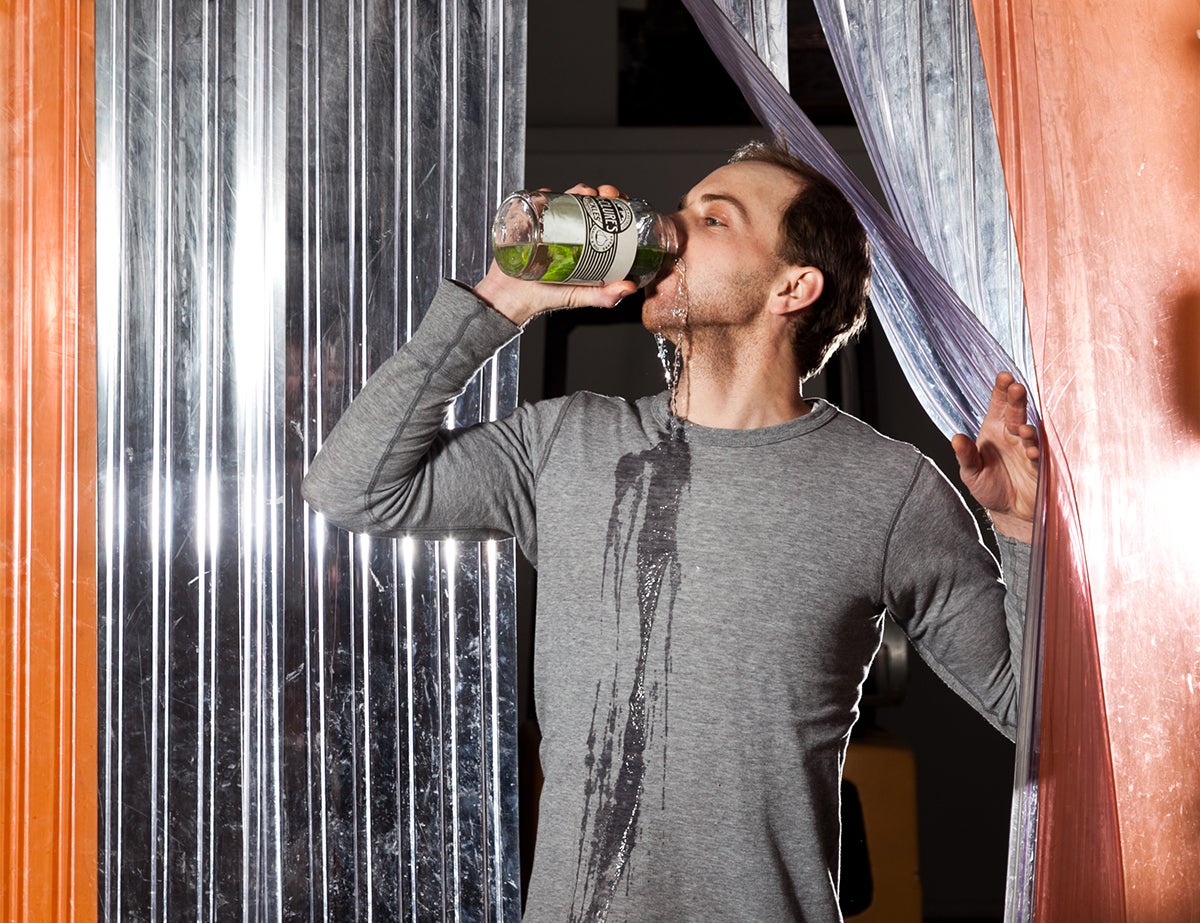 McClure's co-founder Joe McClure drinks the juice from one of his company's jars of pickles, made from his great-grandma Lala's secret recipe.
Image credit: McClure's Pickles

In line with this thinking, the company has room for improvement. McClure notes the problem of a bottleneck of products as automation makes some parts of the assembly line more efficient than others. He says the company tries to minimize this, as well as out-of-stock issues, but they still happen. That’s part of the reason it’s brought on seasonal workers.

“To get where we want to go in the next five to 10 years, more and more automation needs to come on,” McClure says. “It’s kind of a double-edged sword: We’ll never be able to grow without automation, and growth means hiring more people.”

Another take
From a safety standpoint, robots are one of many solutions that have the potential to minimize worker injuries. U.S. companies spend $170 billion a year on costs associated with occupational injuries and illnesses, according to the U.S. Occupational Safety and Health Administration

However, companies planning to add new machinery or even processes to boost efficiency, safety or both should keep in mind that these might come with new risks, says John Dony, who serves as director of environmental, health, safety and sustainability at the nonprofit National Safety Council (the organization responsible for the “Click It or Ticket” seatbelt campaign in the 1970s), as well as director of the Campbell Institute within the Council.

“You often introduce some new risks and hazards when you bring in a piece of equipment,” he says. “You’ve got moving parts, you’ve got things that are rotating, you’ve got heavy arms that are manipulating things. So you always have to be cautious that you’re not removing one set of hazards and introducing a worse set. That’s very often not the case, but you do have to control for all of those sorts of things.”

Similarly, Dony says, a company opens the door to safety hazards whenever it redesigns, disrupts or adds a process. Those managing the change should look from the start to the end point of the workflow to identify and prevent problems.

If a company is adding a machine, Dony notes, it should be careful not to “over-rely” on it. “In warehousing, I think a lot of organizations in the logistics space have really aggressive goals and targets for the individuals that work those jobs, because there’s so much help from automation,” Dony says. “That leads to issues that aren’t directly physical, like stress and anxiety.” He explains that in the last five to 10 years, he’s noticed a trend reshaping how people approach workplace safety to account for these factors, and that Germany has recently began enforcing a limit on the quantified level of stress employers can put employees under.

Estimates for return on business investments toward safety vary widely, Dony has found in his 10 years with the Council, in terms of money these efforts save businesses in medical and insurance costs, worker absences due to injury and worker turnover and retraining. Plus, it’s even more difficult to quantify the ROI of company morale and reputation when incidents are minimized. He says someone asks him a question related to the costs of safety breaches nearly every day.

“Despite the research that’s been done on it, despite the fact that people can feel it in their guts, it’s still something that feels like it needs to be justified,” Dony says. “Most mature organizations are balancing out that lagging look with leading indicators of, ‘How can we prevent the next incident from happening?’ and ‘What data is going to tell us, ‘This is where we’re going to see a problem’?’”

How Real Leaders Focus on What Really Matters