Human vs. Machine: Blue Collar Tech Startups Side With Humans

By Yves Frinault March 14, 2018
Opinions expressed by Entrepreneur contributors are their own.

There’s a problem with Silicon Valley.

With a culture that emphasizes disrupting entire industries through automation, tech startups often forget to consider their impact on workers. In creating 1,000 jobs in Silicon Valley, many startups may very well be destroying 10,000 jobs elsewhere. They increase inequality, and most worryingly, if you extend the trend lines far enough, it's a dead end. What happens when all industries have been "disrupted" and all jobs have been automated away?

Every company performs economic arbitrage when they decide between investing in a technology solution or investing in their workforce. Startups can tip the balance of that arbitrage in one direction or the other, depending on if they focus on improving the productivity of the technology or the labor.

Before studying construction management at Stanford, I spent summers working on residential construction sites. During this time I noticed a disconnect between the challenges faced by the workers in the field and the construction technology being developed. Most of the technology focused on helping the architect or the engineer. There was little effort to support the craftsman on site.

As a result, the way construction projects are designed has gone through considerable innovation, while the way projects are executed has not. Many tasks performed onsite by foremen and crews are still done in the same manner they were completed more than 30 years ago: with paper, email, and phone calls. This includes scheduling assignments, updating blueprints, sharing punch lists, and planning walkthroughs and inspections.

I began to wonder: Why are we automating skilled blue-collar jobs away before we've reached the full potential of human capability? That’s what I had in mind when I started Fieldwire, a technology company designed to empower construction laborers and craftsmen by helping them do their jobs more efficiently, rather than replace them.

Advantages of technology for blue-collar workers.

Many industries have failed to recognize the potential of the blue-collar workforce, opting for automated replacements. Although robots are easier to train and manage, they lack the adaptability that is critical to many sectors such as construction. Tech can be designed to obviate automation by maximizing human productivity. Emerging technologies can help companies improve efficiencies, reduce costs, and increase value.

Related: 3 Reasons Why You Should Go into Project Management

Only 30 percent of a craftsman’s day is spent building, or “wrench time” as its called in the construction industry. The remainder is consumed by tasks such as data entry, paperwork and gathering equipment, which generate little value. One study by the National Institute of Standards and Technology concluded the construction industry wastes $15.8 billion each year because of a lack of efficient information management systems for exchanging and accessing data. Construction teams often transition back and forth between paper-based and electronic systems, leading to redundant labor costs for companies. As a result, management teams on construction sites must repeatedly verify that all parties have the same information. 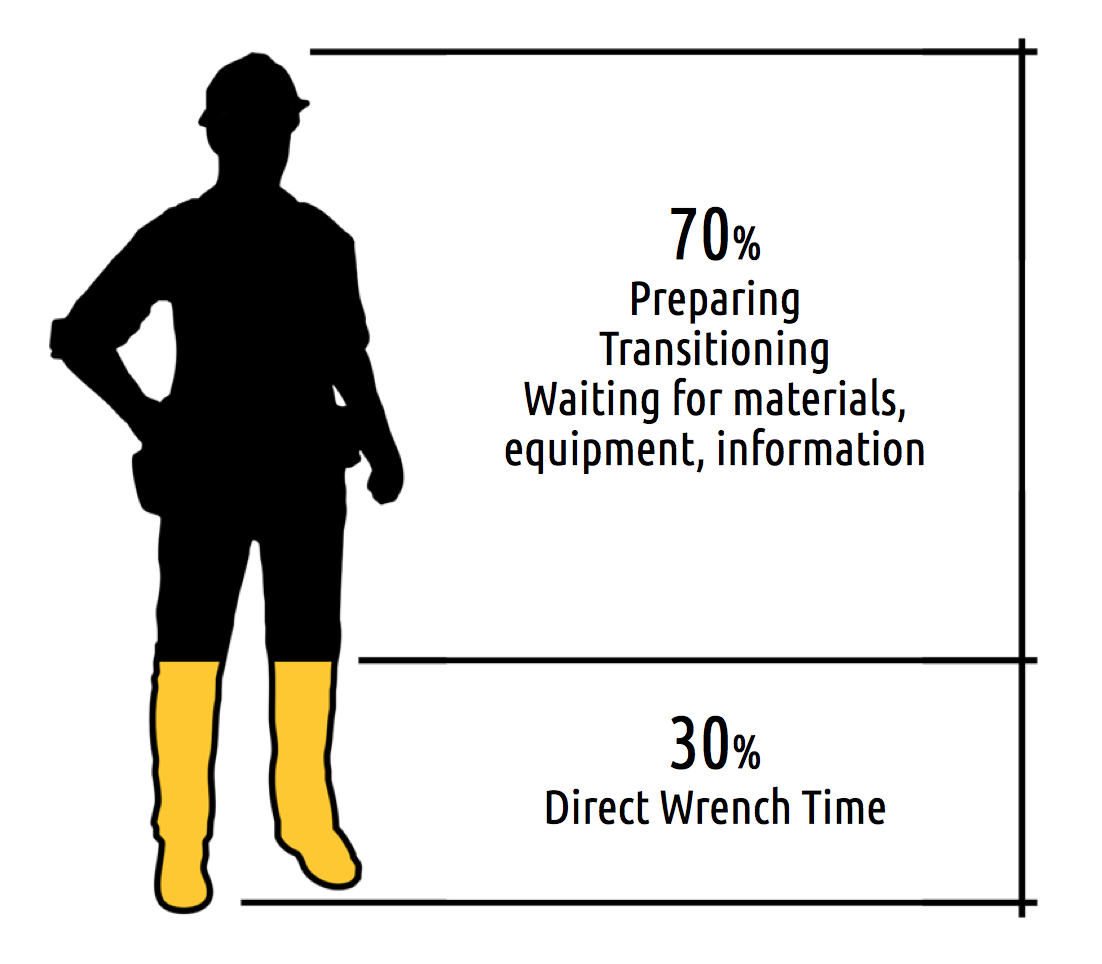 By developing tech that supports blue-collar workers in their daily work, we can reduce the need to perform tedious administrative tasks and help more projects get completed on time and on budget.

The importance of blue-collar jobs.

Historically, blue-collar workers have benefited little from innovation in the digital space. While the personal computer and internet have revolutionized white-collar office work, the impact on labor and craft jobs has been minimal. In fact, over the last 30 years productivity has increased in nearly every industry, yet it has declined in the construction sector. According to research by McKinsey, productivity has nearly doubled in the manufacturing sector but has remained flat in construction. 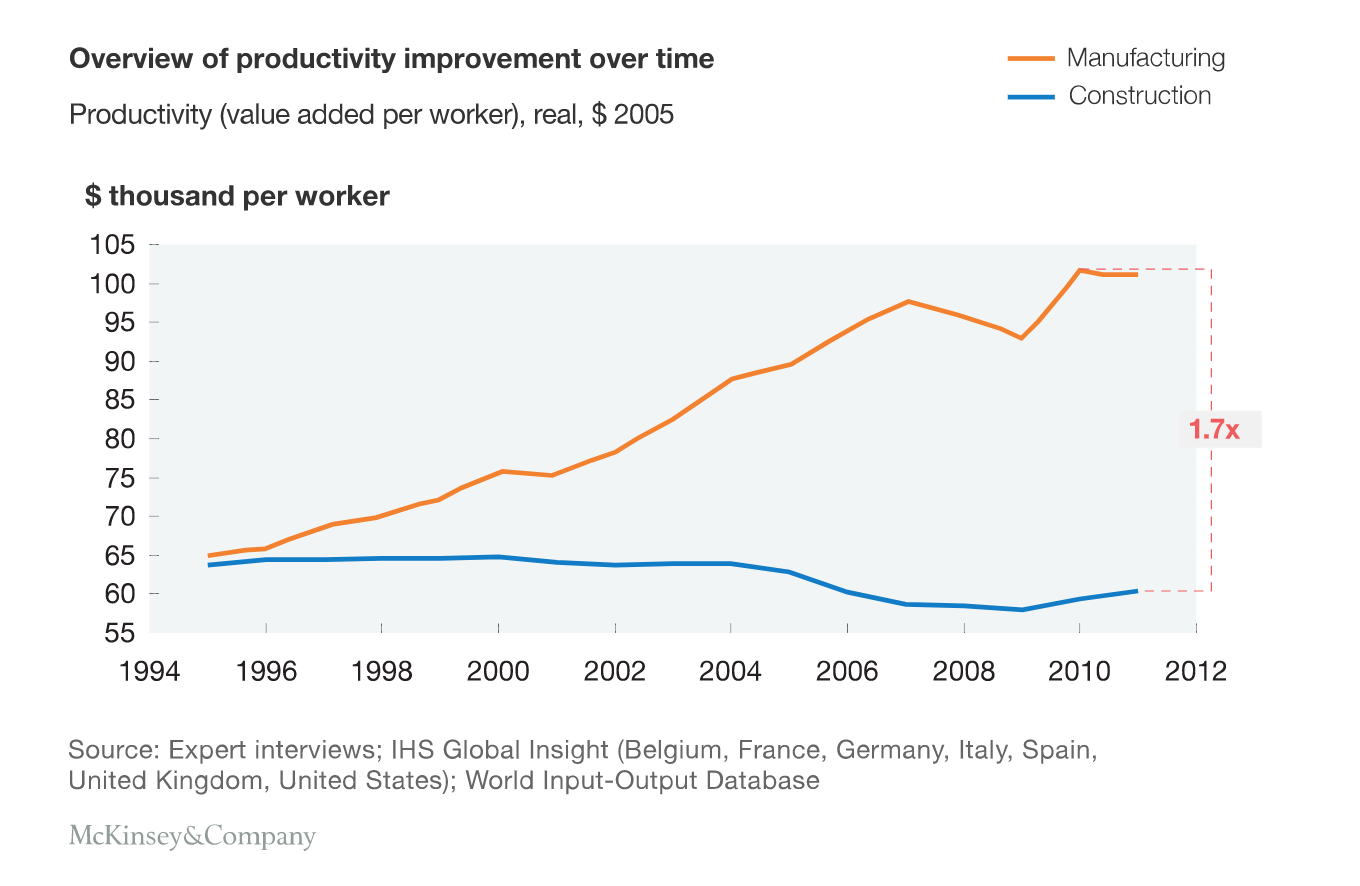 Blue-collar jobs serve a critical role in society. They are good paying opportunities with a low entry barrier and strong growth potential. These positions are the bedrock of a healthy middle class and balanced economy. Unfortunately, these jobs have progressively lost competitiveness which has created an economic incentive for companies to outsource or automate them. We have already witnessed this in the manufacturing sector, and now construction jobs are being threatened by new technologies like assembly line-built homes and self-driving excavators.

By bringing technological leverage directly to the end user, blue-collar tech companies are proving you can improve worker productivity and preserve jobs, while also creating a more profitable business.

Mobile tech has brought online connectivity to people across the globe. It’s convenient for consumers on the go, but it’s also a revolution that benefits individuals who spend most of the day working with their hands.

The mobile revolution didn’t happen on purpose. Companies didn't seek to equip their field workers with mobile phones and tablets; it happened naturally as mobile technology became ubiquitous. This created a platform to distribute products directly to the end user as opposed to doing it through the CIO. Just like the mobile app stores created a gigantic market by allowing developers to directly compete for consumers’ attention, they’ve also enabled the blue collar worker to pick the technology they feel is the most helpful for their day-to-day work. Workers no longer need to use the tech chosen by a disconnected office executive.

Related: When to Upgrade From IT Staff to CIO

Blue collar jobs are often viewed as cost centers by companies despite being most directly responsible for generating value. This perception by decision-makers, who frequently are far removed from the daily activities of construction sites, is why most companies invest conservatively in technology to improve construction labor efficiencies. With mobile products distributed through a freemium model, blue collar workers are able to adopt the technology without additional cost, validate the benefits, and communicate the value to their management.

At Fieldwire, we have seen firsthand how digital technology can help construction workers be more efficient. The project team responsible for the expansion of the Moscone Center, San Francisco’s largest convention complex, was able to coordinate over 350 workers across 60 different companies using our task management software. The $550 million project faced two significant challenges. First, the unique layout of the Moscone Center meant there were long distances between the offices and field site. This could have led to lost time by workers needing to travel back and forth between locations to share information.

Second, sections of the Moscone Center were still being used while the renovations were taking place, meaning construction periods had to be reserved around convention dates. Delays or setbacks could have impacted the dates of events that had been booked years in advance. Craig Hartman, senior partner at the architectural design firm SOM, told the San Francisco Business Times, “It’s almost a chess game of moving parts in order to keep things in operation and keep things operating well. We cannot remove existing meeting space below grade until we build new space to accommodate that.”

Teams onsite were able to communicate and share drawings, files, and tasks while working in different areas. Most importantly, they were able to reduce excess work and complete the second phase of the project on time.

Our company isn’t the only startup focused on building technology to support blue collar workers. It’s a competitive space, especially in the massive construction industry -- which accounts for nearly 10 percent of the GDP in most countries.

Safesite is another startup building technology to support the blue collar workforce. The company provides a safety management platform so teams on construction sites and other high risk industries can notify each other of safety hazards. With Safesite, companies can save money on worker compensation costs. The mobile technology improves productivity by preventing workplace injuries and streamlining safety inspection compliance. Safesite has been used by construction companies on multi-million dollar projects such as the expansion of the Los Angeles metro rail system to the LAX airport.

Tech can increase worker efficiency and preserve jobs, too.

According to the Commercial Construction Index, 60 percent of construction contractors had trouble finding skilled workers in the third quarter of 2017. With a labor shortage, employers have an incentive to find solutions with a relatively low labor intensity, which is not good for blue collar workers. One-third of the contractors surveyed reported a high concern over the cost of skilled labor, while more than one-half reported moderate concern. 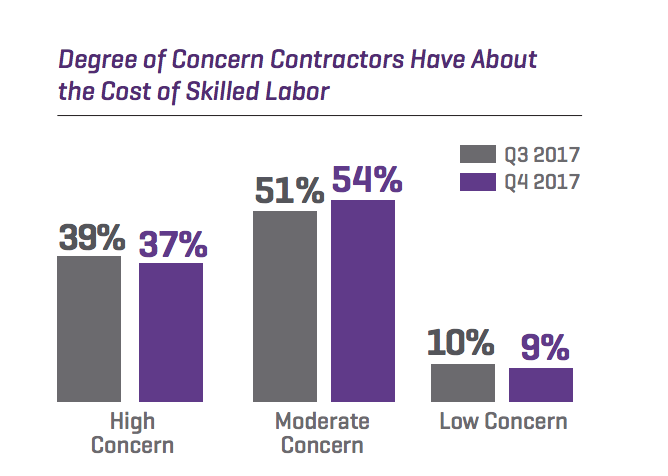 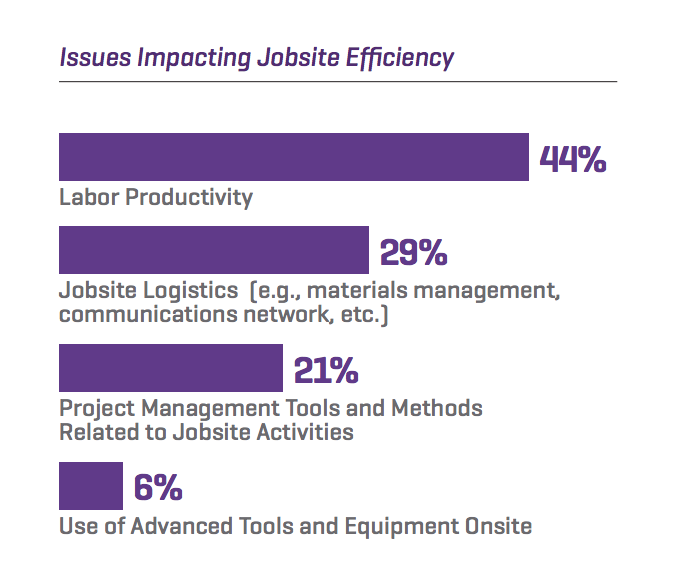 By improving the productivity and expanding the skillset of workers, blue collar technology startups help employers by increasing jobsite efficiency and reducing the cost of labor output. In the long run, these companies provide workers with greater job security by making automated alternatives to labor less attractive.

Related: The 5 Most Successful Work Environments (and the 5 Worst)

A study at Oxford University predicts 47 percent of jobs in developed countries will be replaced by computers or robots in the next two decades. This trend could have profound economic and social consequences. A healthy economy requires a robust middle class. It is critical for the prosperity of nations that technology is utilized in a responsible manner that supports working class jobs. In a diversified labor market, not everyone can be a computer programmer.

Understanding construction workers has been an integral part of developing our product at Fieldwire. Our customers know best what they need to be effective, and we are constantly speaking with them to learn about their logistical bottlenecks. In addition, we have made a concerted effort to recruit team members with experience working in the construction sector. Ultimately, we believe we can revolutionize a traditional industry and bring it into the 21st century by reexamining how work is done.

What would the future economy look like if more startups did the same?