How 3 College Friends Turned a Blog Into a Thriving Business

What began as a joke in 2011 has become an empire adored by millions.

By Jennifer Miller March 6, 2018
Opinions expressed by Entrepreneur contributors are their own.

In 2011, college roommates Samantha Fishbein, Aleen Kuperman and Jordana Abraham published an anonymous blog titled “The Betch List.” It was a snarky take on millennial culture, and they did it mostly to amuse themselves -- but within weeks, more than a million people had read it. The three friends realized there was an audience for their voice.

Six years later, that audience only keeps growing. The trio now run a company called Betches Media, built around their distinct brand of cultural satire. Their news and lifestyle site has millions of visitors each month, along with brand partners such as Netflix, Hinge and Focus Features. Their three podcasts draw nearly 400,000 downloads a month, and they’ve released two bestselling books; their third one, When's Happy Hour?: Work Hard So You Can Hardly Work, comes out October 23, 2018. They’ve also got a forthcoming cartoon on Comedy Central starring Emma Roberts.

Now they’re planning for the future -- one in which they (and their audience) are getting older, more mature and in need of more than jokes about dating and brunch. In this conversation, they discuss how they built a business off a blog post, and how they plan to keep it going.

Related: Use These Tips From 6 Successful Bloggers to Blog Your Way to Riches

Who are the Betches? And, for that matter, what is a Betch?

Abraham: We were all at Cornell and we lived together. “Fratire” -- the intersection of frat culture and satire -- was really big. Tucker Max bros were being glorified. Who better to talk about girls in the same scene than us? It didn’t start as a business venture.

Kuperman: It was observational comedy that came naturally to us. We talk about young women the way they talk to each other. We’re calling out our friends and ourselves.

Abraham: Betches love talking shit, but we’re not hater-y. Everyone does absurd things that they know are a little bit wrong. We provide an outlet for people to laugh at themselves.

Abraham: Our readers come to us for advice because we’re not PC. We don’t talk to them in inspirational quotes.

Fishbein: Unlike Crystal on The Bachelor…

How did you start to turn Betches from a blog into an actual company?

Kuperman: The blog got the attention of a book agent who suggested we write a proposal about Betch life. We worked on it the whole summer after college graduation, and we kept writing the blog.

Abraham: We were all living in our parents’ homes on Long Island. We were just out of college so it wasn’t that weird.

Kuperman: We joined Instagram early. We thought “this might be a thing.” We started posting funny and relatable things and giving our opinions. That’s where all of our traffic ended up coming from. And by the end of 2014, we thought: If we’re serious, we have to go into this 100 percent as a business. 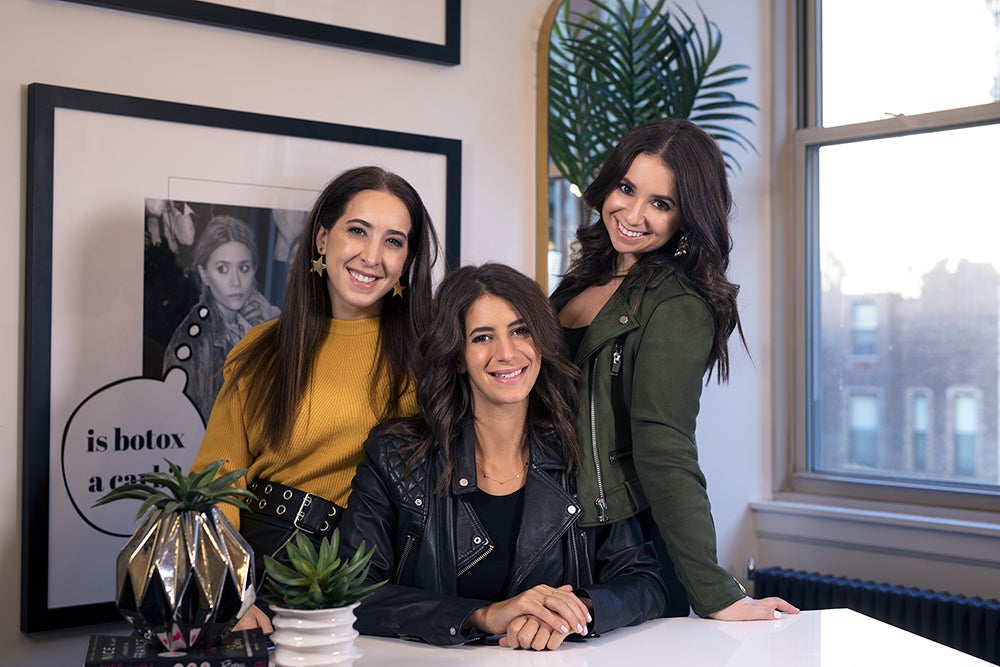 So this wasn’t the traditional career path that you and some of your parents envisioned?

Fishbein: I majored in industrial and labor relations. My family was a little confused by what we were doing and how this was a job. But the book deal helped them see that we were doing something real.

Abraham: I studied policy analysis and management. There wasn’t a ton of pressure to have a specific career as long as I could support myself.

Kuperman: I’d already told my parents that I was taking a year off of applying to med school. [Compared to that] telling them I’m going to spend my time on Betches was actually kind of easy!

But you had no business experience.

Fishbein: That was the number one challenge. We tackled that by asking advice and trusting our gut. We grew slowly. We were making some money, but we still couldn’t afford a New York City life.

Kuperman: We’ve never taken outside investment, and that allowed us to make all the key decisions and be more risk averse in how we spent money.

No investment meant you had to fund Betches yourselves. You had to learn how to monetize the product.

Kuperman: At first, we were doing one-off little ads. Taking on companies as they came. It wasn’t until 2016 that we realized the key was brand alignment—that we should pick and choose our partners.

Abraham: And run 360 campaigns so that brands can be fully aligned with us and feel a sense of ownership. That gives the partnership a more organic feel.

Abraham: Then in our dating podcast, we’ll talk about the benefits of Hinge for girls who are tired of swiping. And we’ll have an article on Betches.com about “Hinge’s Most Eligible” singles. We’ll also help to market Hinge by having readers nominate friends for the list.

Kuperman: We’ll also create custom videos for our brand partners but in the Betches tone.

So a video for the new Netflix show “Queer Eye” features a man in drag giving Betchy advice to a hapless straight guy. In keeping with the Betches tone, the advice is basically, “Change everything about yourself and maybe you’ll get a date. But probably not.” It’s poking fun at bro culture.

Fishbein: Bro culture is based on making fun of women: how they’re better than women or how they can get into bed with us. We’re about empowerment through self-awareness. That’s what’s kept us relatable.

Related: Why Your Small Business Must Start a Blog

Back to brand partnerships. Did you ever get into a partnership that didn’t work out?

Kuperman: In 2012, we were like ‘let’s get into ecommerce’. But we knew nothing about it. We were introduced to partners through friends, but we weren’t invested in the stuff they made for us to sell. We didn’t want to promote those tank tops. So we closed the shop. When we reopened in 2014, we had more confidence in ourselves as businesswomen and took control of the design, language and distribution. Now ecommerce is 20 percent of our revenue.

So now that you are experienced businesswomen and no longer in the college scene, how do you continue to stay relevant to your audience? You started at 21, but now you’re 28. In millennial years, that’s eons.

Abraham: Our audience has grown with us. Looking back, I can’t believe someone printed our first book, Nice is Just a Place in France: How to Win at Basically Everything. It was about Betch life and moving to a new city or decorating your apartment. The next book about dating, I Had a Nice Time and Other Lies: How to Find Love & Sh*t Like That, was more mature. It was a guide book to post grad life.

Kuperman: The advice in that book was empowering and honest, more serious. Our lives were becoming more [adult], and that translated into the tone.

Abraham: The third book, out next October, reflects our maturity and where we are now. It’s career focused, because our audience is growing up and they want professional advice.

Kuperman: Now readers are coming to us for advice about how to ask for a raise or what to do about their bridesmaids.

Fishbein: Maybe the next book will be about Betch moms. But I also run The Sup, a politics and news hub. A few years ago, I wouldn’t have foreseen the political awakening that people have, but uninformed is no longer cute. We can capitalize on that and bring in new people. We did a video segment explaining the Russia scandal while drinking Moscow Mules and wearing big Russia hats.

Kuperman: But we’re also hiring writers who are a little bit younger than us [to stay relevant] to readers who are younger and may just be coming to us for a laugh. We don’t want to alienate anyone.

Abraham: As long as we’re calling out truths, that doesn’t have an age limit.