Wildfang donates substantial money to progressive causes and is willing to make a statement with its products, even if it loses money doing it.

By Rebekah Iliff October 22, 2018
Opinions expressed by Entrepreneur contributors are their own.

To be an entrepreneur, in the most basic sense of the word, is to be a creator. Whether creating jobs, products, wealth or controversy, entrepreneurship is so much more than simply having an idea and bringing it to market. In fact, I would argue that for those who embark on the “entrepreneurial journey,” the idea of making money is secondary to fulfilling a lifelong dream fueled by passion. The creators who manage to find any level of success -- the stats for businesses that actually make it are somewhat discouraging -- must also keep the fire going long after the novelty has worn off. This often requires a commitment to a larger purpose.

The idea of “social entrepreneurship” has been co-opted by marketers and communications professionals to infuse an otherwise mundane business concept with the promise of serving a greater good. However, the majority of entrepreneurs I’ve met -- even without the word social affixed -- believe they are doing something to improve upon a current condition. They could be offering an affordable product to an underserved market, or making it easier to find an eligible suitor. Most are motivated by some sort of social good, if viewed in a broader context.

Despite the over-amplified, salacious headlines we read about greedy, winner-take-all founders, these folks are generally the exception; and yet, they often seem like the rule. Most of us building companies don’t wake up and think: How can I screw everyone over today? Most of us think: How can I not screw this up today? 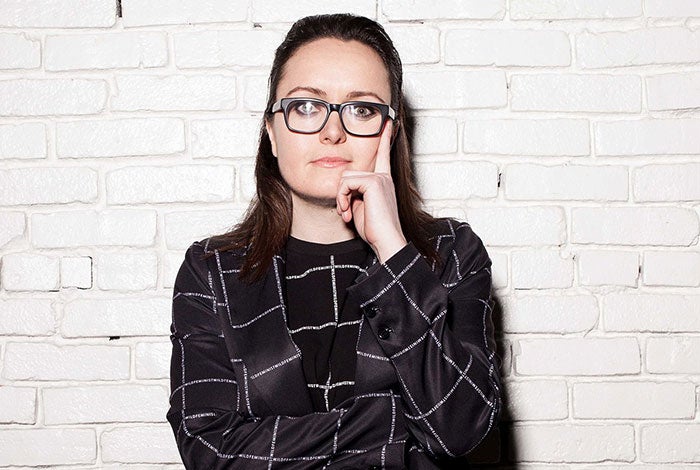 In our increasingly polarized and volatile climate, social entrepreneurship may in fact be the only kind of any real value. Just ask Emma Mcilroy, CEO and founder of Wildfang. The queer-female-founded brand's motive lies in “providing gender-neutral and feminist apparel for badass humans everywhere.” It is also the brand behind the response to Melania Trump's "I really don't care" jacket. This year alone, the company has raised and donated $400K to RAICES, ACLU, Planned Parenthood, Joyful Heart, New Avenues for Youth, Tegan & Sara Foundation, I Am That Girl, Q Center, Girls Inc., and more. Leading up to the November 6 midterms, the brand will will leverage its four physical locations, online store, partnerships with Refinery29 and Riveter, and community of more than 300K followers and subscribers to encourage people to vote.

While I may not be 100 percent aligned with her political beliefs, to engage in a conversation with Mcilroy is to understand exactly why and how entrepreneurship matters for the future of America’s social fabric. She is a force and an inspiration.

A company is born

Mcilroy grew up in Belfast, Northern Ireland, and moved to the United States in 2008 for a brand marketing job with Nike. As she puts it, “I was as an immigrant with paperwork.” After a few years working for “the man,” she and her best friend came up with the idea for Wildfang. “We were finding ourselves in men’s departments looking for blazers, button-ups and graphic T-shirts. The quality wasn’t great. Nothing  fit our frames. We thought it was weird that the type of clothing we actually liked to wear -- which could be defined as ‘tomboy’ -- was only made for men.”

The company was officially born in 2013 as a third-party retailer online. According to Mcilroy, “The world reacted well.” They had clearly identified an underserved market. Soon the brand took off and built a band of loyal followers of both women and men. “We like to think of ourselves as the Robin Hood of clothing -- stolen from the boys.” Soon realizing they would have to design and manufacture their own products (after all, the very reason the brand exists is that very few options were available), Wildfang was forced to kick things up a notch.

Mcilroy admits to the difficulties she faced as the company grew, despite generating a tremendous amount of buzz and loyalty among a community of followers including women, LGBTQ, marginalized groups and more: “I’ve done everything wrong at some point. Created the wrong product, opened a store all wrong, you name it. But the reason we are still around is because of our mission.”

Related: How to Engage Employees Through Your Company Vision Statement

From fashion to social activism

According to Mcilroy, the 2016 election was a big turning point for the company. The Trump victory had her questioning whether or not Wildfang was even creating products anyone wanted: “As an entrepreneur, you think, Are we on the wrong side of this? Did we have this wrong all along? We -- and by that I mean our entire Wildfang community -- were devastated with the results of the election.”

But then something unexpected happened.

“The three days after the election were the biggest sales days of the year. We did not do one single promotion. As it turned out, our brand was resonating and our community was mobilized into action through our brand.”

Since then, Mcilroy has led Wildfang in a direction that is seemingly more political: “We put our money where our mouth is. We are still under $10 million in revenue, but we have given away a tremendous amount of money because there are so many organizations that need help right now. It’s the right thing to do.”

Additionally, as part of the shift, the company has made listening to its customers a top priority. As a result, Wildfang now offers up to size 20 and shoots every product on three different-size models even though it increases production costs. “Over 50 percent of women are size 12 and above. In general, the fashion industry does a lackluster job of embracing this reality.”

Another aspect of Wildfang’s commitment to social activism extends beyond just the products themselves: “We do a lot of events to raise awareness and build community. When we have panel discussions or speakers, 50 percent of the lineup has to be people of color and 50 percent has to be queer. It’s not an exact science, but it ensures a level of authenticity for the brand.”

Related: How Come Every Tech Panel Is Always a Tech 'Manel?'

The truth about social entrepreneurship

I admire this level of commitment from a company of Wildfang’s size. How many brands these days go around waxing poetic about diversity and inclusion while the internal genetic makeup is anything but that? It’s very simple to create a PR or marketing campaign on paper, and quite another to live and breathe it.

When I asked Mcilroy about her proudest moment yet, she didn’t skip a beat: “Our response to the Melania jacket was incredible. We were able to get it live on the site in four hours. Employees stayed up all night to get it done. Because we knew our community, we knew what to respond with and we had the bravery to do it.”

Although the company actually lost money on the production, it sold 6,000 units in less than one week and ultimately raised $250K for RAICES. “To be able to take a really strong point of view is much easier in a small business. This is part of the joy of being a focused brand that knows its customer in and out.”

During the course of our lengthy conversation, Mcilory cited several examples similar to above: The entire team made decisions not because it was profitable but because “it was the right thing to do.” I would venture to guess that Wildfang will continue to be a forceful brand and emerge as a blueprint for the future of what's possible for an entrepreneur: where entrepreneurship isn’t synonymous with indifference to social good, but rather a vehicle for it.

Rebekah Iliff is the chief strategy officer for AirPR, a technology platform to increase public-relations performance that serves Fortune 500 and fast growing technology companies. Previously, she was the CEO of talkTECH Communications, where she created an industry-first methodology for emerging technology companies which positioned talkTECH as one of the fastest growing, launch-only PR firms in the U.S. Iliff holds a B.A. in philosophy from Loyola University Chicago, and an M.A. in organizational management and applied community psychology from Antioch University at Los Angeles (AULA).