It's not easy to create a product that stands out, especially in a hyper-competitive segment.

Take a look at any road, parking lot or showroom, and chances are the vast majority of vehicles are crossover SUVs. These ubiquitous four-wheel drives are by far the hottest segment in the auto industry today, with U.S. sales rising by 12.6% to a lofty 3,557,102 in 2018, according to CarSalesBase. It makes sense; they drive like cars, have plenty of interior space and are surefooted in inclement weather and off-road scenarios alike. So how to make one particular model stand out?

That's the question Steve McCabe, senior lead designer at General Motors, was tasked with when setting out to build the all-new Chevy Blazer. Resurrecting one of the brand's most iconic nameplates (the original launched in 1969) is daunting enough, even without the challenge of making a mark in such a competitive segment. "The pressure was internal," he says. "It was our challenge -- from a design/engineering/sculpting perspective -- not to miss the mark during execution."

Looking toward the sporty Camaro for inspiration, McCabe and his team succeeded in designing an SUV that doesn't quite look like anything else on the road. Its wide stance and bold sculpting give the Blazer an aggressive appearance that's backed by an available 308-horsepower V6. Inside, the vehicle offers 4G LTE Wi-Fi connectivity, intuitive controls and a variety of convenience and safety features -- ideal for those looking for a mobile office.

Entrepreneur spoke with McCabe to find out how he and his team used a directive laid down for them by GM leadership to build a vehicle that stands out from the pack.

The original Blazer is one of Chevy's most beloved nameplates. Why did the brand choose that name for this model?

It's definitely an iconic nameplate! We chose it because we felt this new Blazer was equally iconic, but in its own right, and in a much more modern way.

Do you have any personal memories of the original?

My father had a K5 Blazer when I was very young. I don't personally remember it, but I do remember him telling fond stories of it and always talking -- to this day -- about how much fun it was. 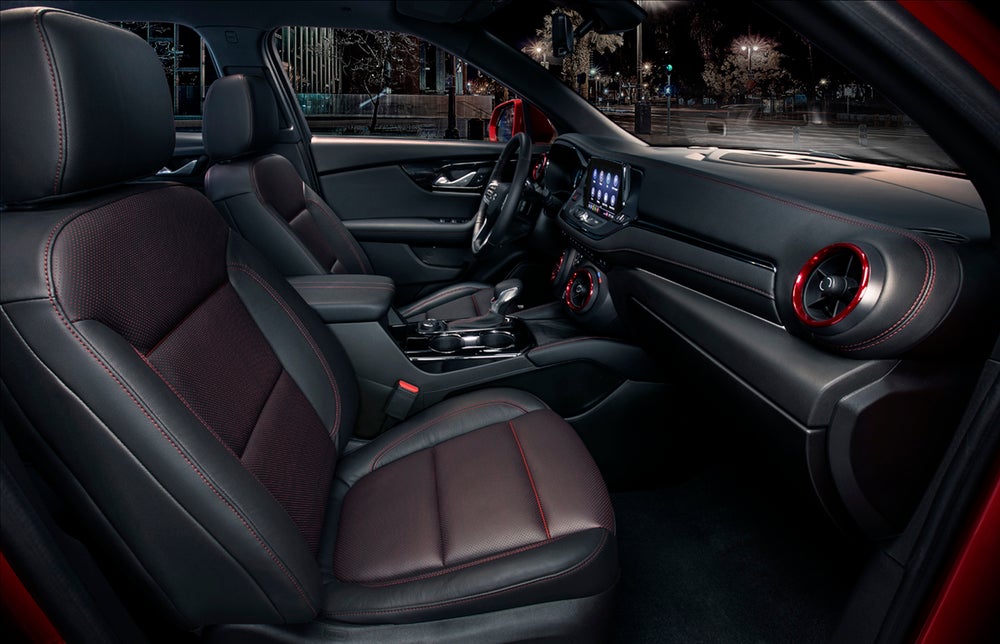 Are there any design cues from previous versions?

None at all. We were very cognizant to steer this vehicle's design away from "retro" and into more of a modern/progressive persona.

What features make the new Blazer useful for those looking for a mobile office?

I've found the rear storage very useful, and I was genuinely surprised at how much I could fit in it. The sliding seats in the second row are a godsend, especially for those still using child seats, as you can slide them all the way forward and reach the kids from your seating position in the front. I've found the connectivity to be simple and intuitive, and the safety features are also phenomenal. While I don't promote multi-tasking while driving, I can personally attest to both the blindside alert and forward collision alerts being lifesavers for those of us who may become occasionally distracted.

There are so many crossover SUVs on the road. How does the Blazer differentiate itself?

Styling. It's a pretty conservative field, and the new Blazer really stands out from the crowd. The base model offers a great foundation, and then we built on that, by offering two very distinct personalities in the Premier and RS. The Premier caters to a more formal/luxury-minded buyer who appreciates traditional bright-work/accents and a more upscale look, with body-color matched trim. The RS will attract someone looking for something a little more sporty/aggressive, with its black chrome accents, and gloss black trim work.

Have you spent much time behind the wheel?

I've had the pleasure of driving it a few times around Detroit. I've driven a lot of cool and interesting vehicles during my career at General Motors, but none have garnered quite the same amount of interest as the bright red RS I had recently. People are drawn to it. I had a couple people literally offer to buy it from me on the spot. It's an unbelievably rewarding experience to get to finally get behind the wheel of a car that we all worked so hard on and be able to turn heads in it.

Would you say that it's a Camaro in SUV clothing?

The Blazer answered a question asked by our leadership: "What would a Camaro SUV look like?" When we started with the Blazer, we leveraged the already iconic styling DNA of the Camaro, and injected that into a great SUV package. It's got the aggressive appearance that Camaro fans love -- the grille, dynamic line work, sculpted surfacing -- but the versatility and functionality that most of today's customers need from an SUV. We feel we have found a great balance with the Blazer in that regard. It offers all the functionality, but without the compromise on styling that can often happen when moving away from a sports car and into an SUV.