The company's Advanced Technologies Group's new office fosters collaboration inside and out of work.
Next Article

What does success look like at Uber? The company has famously had its share of scandals, and its IPO earlier this year disappointed investors, but in a letter to his staff, CEO Dara Khosrowshahi wrote that “our true north will be determined over the long term.” Much of that long-term vision is explored here, in a recently renovated industrial complex in San Francisco called Pier 70, which once housed shipbuilders and ironworkers but is now home to Uber’s Advanced Technologies Group. The employees in this space work on projects far outside Uber’s core ride-hailing business -- they’re designing and developing self-driving vehicles, plans for aviation sharing, and the company’s JUMP bikes and scooters. And they get out of the office a lot: Working on transportation often means going along for the ride.

“I returned in February from maternity leave, and as a new mom, I really enjoy the fact that we have accessible and comfortable nursing rooms. You can book it and it’s yours for that half hour or however long you need. It makes coming back to work much, much smoother.”

“I’m on the New Mobility team, and my role is to make sure bikes, scooters, and charging infrastructure are reliable before they go out into the field. It’s been just me for the past two months -- and I am hiring -- but it’s felt like everyone here is in it together. I’ve never had a situation where anyone has said, ‘That’s not my job.’”

“When I started at Uber in 2014, I worked at a tiny coworking space in Columbus, Ohio -- four desks, eight people. Despite the fact that we’ve grown dramatically over the past four or five years, I like that the collaborative culture is similar. Everyone is literally and figuratively on a level playing field in the new office.”

Related: At Chief, the Club for Female Executives, High-Powered Women Aim to Break the Glass Ceiling -- For Good

“The biggest change in working at Pier 70 is that instead of every team being in its own silo, we have a pretty open office, and we can get to the root of any problem as it comes up. If someone on the Car Ops team needs to speak to the engineers, we just walk across the atrium.”

“If one of us needs to get out, we’ll take a bike from the tech shop and go on a ride around the area or to the park. Last week, someone on my extended team said he was having a bad day, so I biked a mile with him, sat and looked at the bay, then biked back.”

Related: The CEO, but Not the Founder: How to Lead an Already-Established Tech Company

“I signed up for a bike ride with the Uber cycling team, the AIDS Life Cycle, and it’s 545 miles over seven days. Before, I’d never biked more than an hour in my life on a road bike. My team has been training with me every weekend, 25 to 40 miles, to get ready. I’ve never had a team support me this much.”

“On our team, the person who’s latest to a meeting has to sing a song. It gets embarrassing. At the last meeting, one guy sang ‘A Whole New World,’ from Aladdin. I haven’t had to do it yet and hope I never have to, because I don’t think anyone wants to hear me sing!” 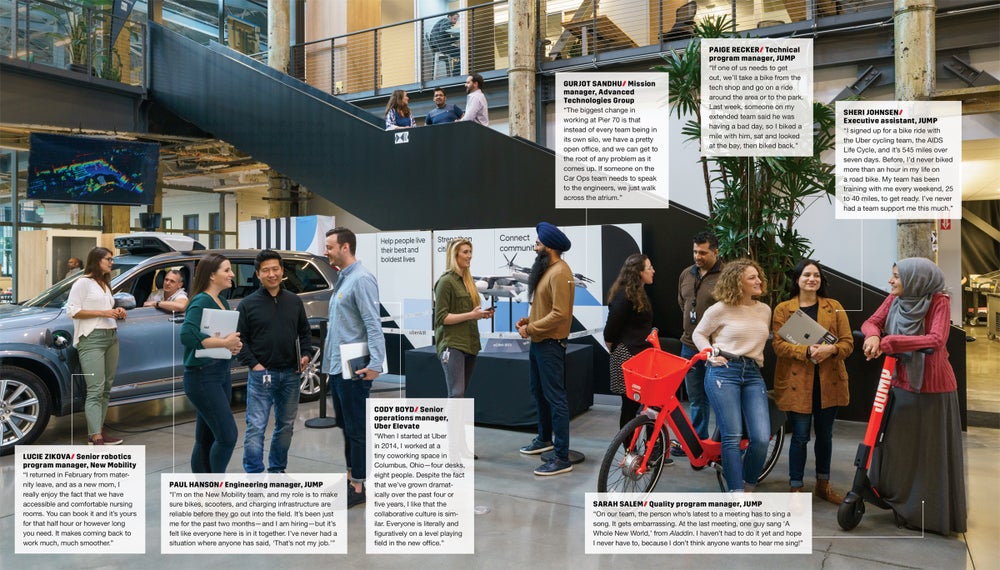 Zola's Company Culture, Before and After the Pandemic

This Toy Company Reopened Its Office. Here's What Its Employees Think.