By Mariella Moon October 4, 2019
This story originally appeared on Engadget

Facebook has removed 211 accounts on its main platform, 107 Pages, 43 Groups and 87 Instagram accounts for inauthentic behavior. More importantly, the social network's investigation revealed that their efforts were coordinated and that they were all linked to PR firms in the UAE (Charles Communications), Egypt (Flexell) and Nigeria (MintReach). The company said in its announcement that these takedowns are part of its ongoing investigation into coordinated inauthentic behavior in the region. In August, it also took down hundreds of accounts and Pages traced back to marketing firms in the UAE and Egypt.

In particular, the firms created fake accounts and used them to post anti-Qatar, anti-Iran and pro-UAE propaganda. Egypt and the UAE cut off their ties with Qatar a couple of years ago, accusing the country's government of supporting terrorism. Here's a sample post by one of the fake Pages: 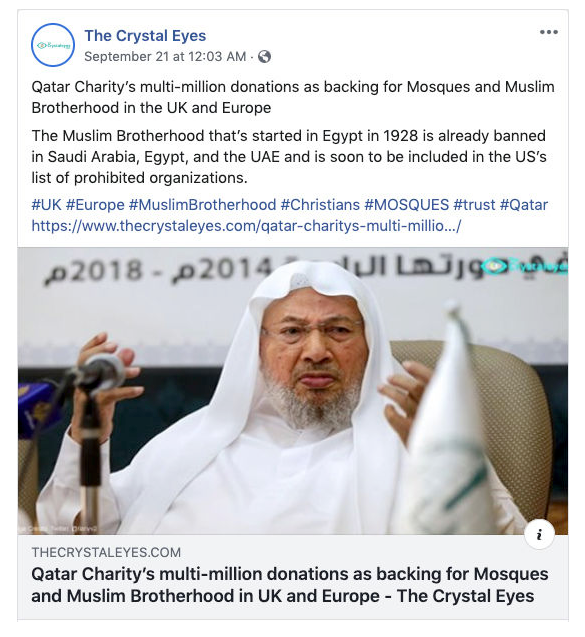 BuzzFeed News, which previously discovered the PR firm-run fake accounts, talked to Oxford University's Computational Propaganda Project researcher Samantha Bradshaw. She said she and her fellow researchers are increasingly seeing more and more "PR firms or strategic communication firms offer computational propaganda as a service for all sorts of clients, including governments." She added that the firms that engage in that kind of business "tend to work more internationally and take on more clients."

And it does look like fake news has become big business for marketing firms around the world because the social network has also removed 69 Facebook accounts, 42 Pages and 34 Instagram accounts engaging in inauthentic behavior linked to Indonesian media firm InsightID. Finally, it has pulled 163 Facebook accounts, 51 Pages, 33 Groups and 4 Instagram accounts linked to Egyptian newspaper El Fagr. Those fake accounts and Pages also posted pro-UAE, Saudi and Egypt, as well as anti-Qatar and Iran content.