Five lessons he learned on his journey from jail to founder.

By Emmy M. Cho June 8, 2021
Opinions expressed by Entrepreneur contributors are their own.

As he sat in a prison cell between the ages of 16 and 22, sentenced for participating in a fight, few people viewed Prophet Walker as a future innovator, leader and community-builder. In fact, the only person in prison who viewed any potential within this young man was Walker himself.

“Throughout my sentence, everything around me told me that I was less than human, that I was irredeemable,” the 33-year-old founder of the Los Angeles co-living space Treehouse says. “When I was being tried, I remember people standing opposite me in the courtroom telling me I was ‘fully incapable of being anything.’”

The only thing that propelled Walker from utter humiliation and disregard of his humanity, towards becoming a celebrated innovator in the cutting-edge real estate market of co-living, was remembering the sense of community he experienced amidst hardship.

Growing up in Watts, a neighborhood in southern Los Angeles, Walker was no stranger to gang violence, drugs and incarceration. But he was also never alone. When he witnessed the murder of one of his closest friends at age 12, every person on Walker’s block came out and took turns holding him. “Everyone supported one another — poverty simply necessitated that.”

Nearly two decades later, community remains at the heart of everything Walker does, entrepreneurial or otherwise. “At Treehouse the root is community, the trunk is the communal space, the branches are the network of spacious apartments, the blossoms are the connections between friends and family, and it all grows wild when pollinated by kindred spirits,” its website reads.

Co-living is not a new concept — it is quite common outside the United States in major African and Asian cities. What Walker sought to do when developing Treehouse, however, was to foster togetherness in an era where luxury living spaces so often connote privacy and isolation. Residents rent individual bedrooms and bathrooms of approximately 250 square feet — described by Walker as “effectively a micro-studio” — that share kitchens with three to five people.

Nestled in the larger complex are a constellation of smaller, specialized “vulnerable” and “inspirational” spaces. Residents can curl up with a book in the library or pursue their musical projects in the recording studio. The Café, described by Walker as the equivalent of Central Perk in Friends, is a place that’s always buzzing with human activity and friendly interaction.

Walker’s journey has been one full of lessons in entrepreneurship, which he now works to pass along to those around him — from giving talks at the prison where he was once incarcerated to fostering meaningful relationships with other members of the Treehouse community.

In a candid conversation, Walker opened up about some of these key realizations, and how he came to recognize the power of community in shared humanity. His perspective is valuable to anyone thinking about starting a business, in the midst of an entrepreneurial journey themselves, or simply dealing with the challenges of staying grounded and productive through the ups and downs of life.

“Look at yourself in the mirror and push forward"

During his incarceration, Walker decided to turn his life around, founding a college program that enabled inmates to earn two or four-year degrees. Then-governor Arnold Schwarzenegger approved his program proposal, and the pilot began with 30 people. As of 2021, it has served tens of thousands of incarcerated juveniles, affording them access to education that they would never have received otherwise.

“That was a massive moment for me, to realize that even while I was physically shackled, I still had an incredible amount of potential and power to do good in the world,” Walker says. “That really, really triggered something for me in my brain.”

“It’s easy to give up on yourself then and say, ‘no one loves me, no one cares.’ It’s very easy, but the ability to still look at yourself in the mirror, after being strip-searched or something, and still say, ‘no, I deserve to be here and I’m going to keep moving forward,’” Walker says, is what’s gotten him here, and what continues pushing his entrepreneurial endeavor to new heights.

Leaving prison after serving his nearly six-year sentence, Walker — then in his early 20s — studied engineering at Loyola Marymount University and then began working at Nautilus Group, a prominent real estate group based in the Bay Area that manufactures apartment buildings. Beginning as an intern, Walker was later promoted to and served as one of the company's top superintendents.

Throughout the years, Walker remained involved in the development and construction industry until he ran for California State Assembly in 2014. Winning the primary but ultimately losing the general election, Walker returned to the real estate business and met his business partner, Joe Green. After numerous recommendations from mutual friends to meet one another, Walker and Green sat down and immediately recognized a connection. 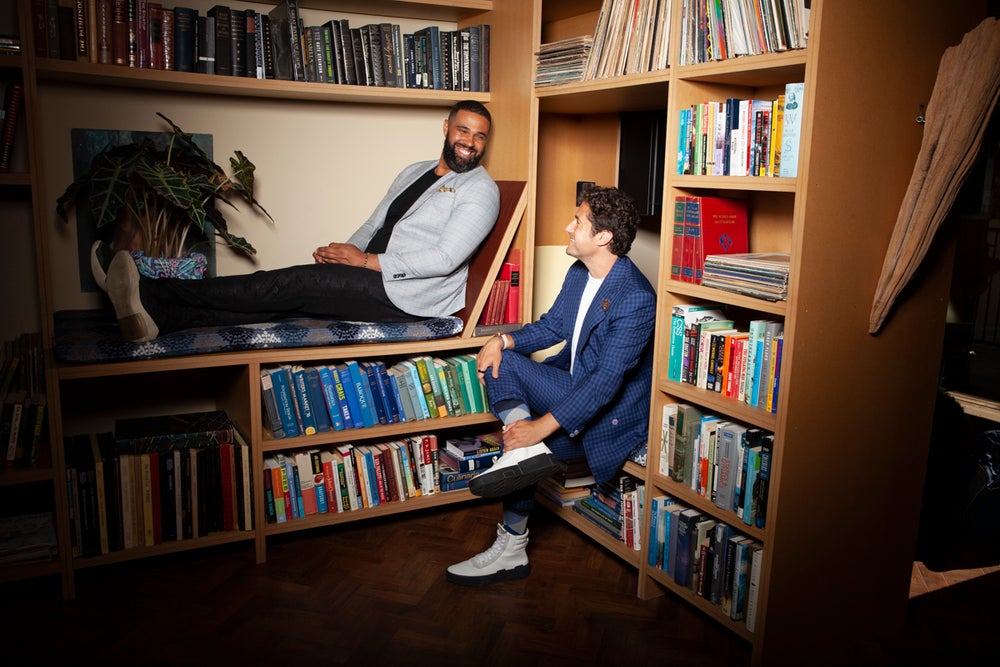 “It became pretty clear to me after our first meeting that we were aligned around a few things,” Walker says, the most prominent shared interest being community.

Despite their shared conviction, pitching the idea of Treehouse to investors was no smooth ride. Of the upwards of 60 lenders that Walker and Green spoke to when raising money for Treehouse four years ago, only one said yes. Of the hundreds of investors Walker and Green pitched their idea to, only 35 gave the thumbs up. “Compute that from a time standpoint,” he says. “Each investor, at a minimum, is a 45-minute conversation. Knowing this and still moving forward is part of the journey of entrepreneurship.”

More challenging than the long hours and constant rejection was the practice of persistence. Each time an investor outlined the manifold ways the project would ultimately fail, it was up to Walker and his team to continue pushing forward, seeking out people with whom the social and entrepreneurial mission of Treehouse would resonate. “During one of my first pitch meetings a guy all but called me an idiot,” Walker says. “Just imagine hearing that and still saying ‘no, this should be in the world. I really think that this should be in the world.’”

“I’m not a genius. I’m not smarter than anybody else. I just have the conviction and the perseverance to push through,” he says.

Walker’s co-founder Joe Green, a social entrepreneur, investor and Harvard graduate who happened to be Mark Zuckerberg’s suitemate, could not come from a more disparate background than his business partner. Green was never exposed to the atrocities of gang violence, but he was a frequent victim of bullying, a hardship that made him, according to Walker, feel “more isolated” than his colleague ever did growing up.

Despite having existed in two different spaces for the majority of their lives, the fellow Angelenos have been united by a common purpose of fostering community in an increasingly isolated world. “The unspoken secret of L.A. is how divided we are both racially and economically,” Walker says. “It’s divided very clearly geographically. I grew up in South L.A., Watts, and dealt with all that came with that, from poverty to gang violence. Joe, around the same time, was growing up in Santa Monica and living quite a different life.” Now the duo are coming together to challenge the city’s fraught legacy of segregation and isolation.

Their divergent entrepreneurial expertise was also a practical plus of the partnership. “I knew real estate; he did not,” Walker says. “He built start-ups, and I had not. There was just a very tactical, symbiotic relationship there that allowed for both of our genuine care to build community and be impactful in people’s lives coupled with two complementary skill sets to actually get it done. And so off we went.”

Walker often encourages his team to “figure out the brick in the wall” rather than try to fix a problem in its totality. “If we can figure out how to place this one brick, as stupid as it sounds,” Walker says, overwhelming challenges don’t seem so impossible anymore. Assessing obstacles from a first-principles standpoint, then trying to be open all the way to the bottom has been a tried-and-true strategy.

“I don’t care about the wall,” he says. “I need to know how to place this one simple brick and gauge it on its merits.” Walker is critical of assumptions and the danger they pose in confusing the simple reality of whether something is working or not. “Engineering school taught me a very methodical approach to thinking: Here are your givens, here are your many variables, test all the variables on their light merits alone,” he says. “That’s it. Don't add your assumptions, check your bias.”

Being able to make a decision is important, and so is being able to live with those decisions. There’s an integrity to Walker’s thinking there: “Sometimes I make bad decisions, and that’s okay. And sometimes I make really good ones. Doesn’t make me a savant. Trying to find that balance, constantly, is pretty important.”

Have the discipline to be monotonous

Every morning, Walker wakes up between 5:30 and 6. “I try my best to sit with myself and my thoughts for about an hour,” he says. “That’s either pacing back and forth or sitting in the bed or something just sort of quietly.” Around 5:00 pm, Walker’s daughter gets out of school and he concludes work for the day. They’ll run through errands together, whether it’s a quick run to the grocery store or doing laundry. When it comes time to winding down, father and daughter complete the day with a meditation session.

That’s the reality of being an entrepreneur — it requires having the discipline to be monotonous. I guess that's not something you really see in magazines or big headlines where people see Joe and I smiling in the newspaper,” he says. “They don't see that monotony.”

Especially in a place like Los Angeles, where there is always a party or somebody new to meet, Walker says being an entrepreneur calls for a sense of groundedness. Though the glitzy, spontaneous lifestyle certainly has its place, being able to approach one’s day to day with a sense of seriousness and calm is a must for any aspiring entrepreneur.