Does WeWork Stock Deserve a Place in Your Portfolio?

The shares of workspace provider WeWork's (WE) have been on a downtrend since they made their stock market debut last year. The company's expansionary policies and collaborations to boost its...

By Subhasree Kar April 27, 2022
This story originally appeared on StockNews

The shares of workspace provider WeWork's (WE) have been on a downtrend since they made their stock market debut last year. The company's expansionary policies and collaborations to boost its business have so far failed to generate positive momentum in the stock. So, considering the company's weak fundamentals, would it be wise to bet on the stock now? Read on.

Flexible workspace solutions provider WeWork Inc. (WE) in New York City delivers technology-driven turnkey solutions, flexible spaces, and community experiences. Its product offerings include Core space-as-a-service, WeWork All Access, WeWork On Demand, and WeWork Workplace. The company began trading on the New York Stock Exchange under the ticker symbol "WE" on Oct. 21, 2021., following its merger with special purpose acquisition company BowX Acquisition Corp. However, the stock has plunged 44.1% in price since. WE shares have slumped 23.4% year-to-date to close yesterday's trading session at $6.59.

Adding to the concerns is an investigation of the company concerning claims it violated securities laws. Last December, The Schall Law Firm, a national shareholder rights litigation firm, announced that it was investigating claims on behalf of WE investors. The investigation concerns whether WE issued false and/or misleading statements and/or failed to disclose information pertinent to investors.

In an SEC filing on Dec. 1, 2021, the company announced that it would restate its financial results for 2020 and the first three quarters of 2021. WE failed to properly account for certain equity when it went public. Several other law firms are also investigating the company on this matter. 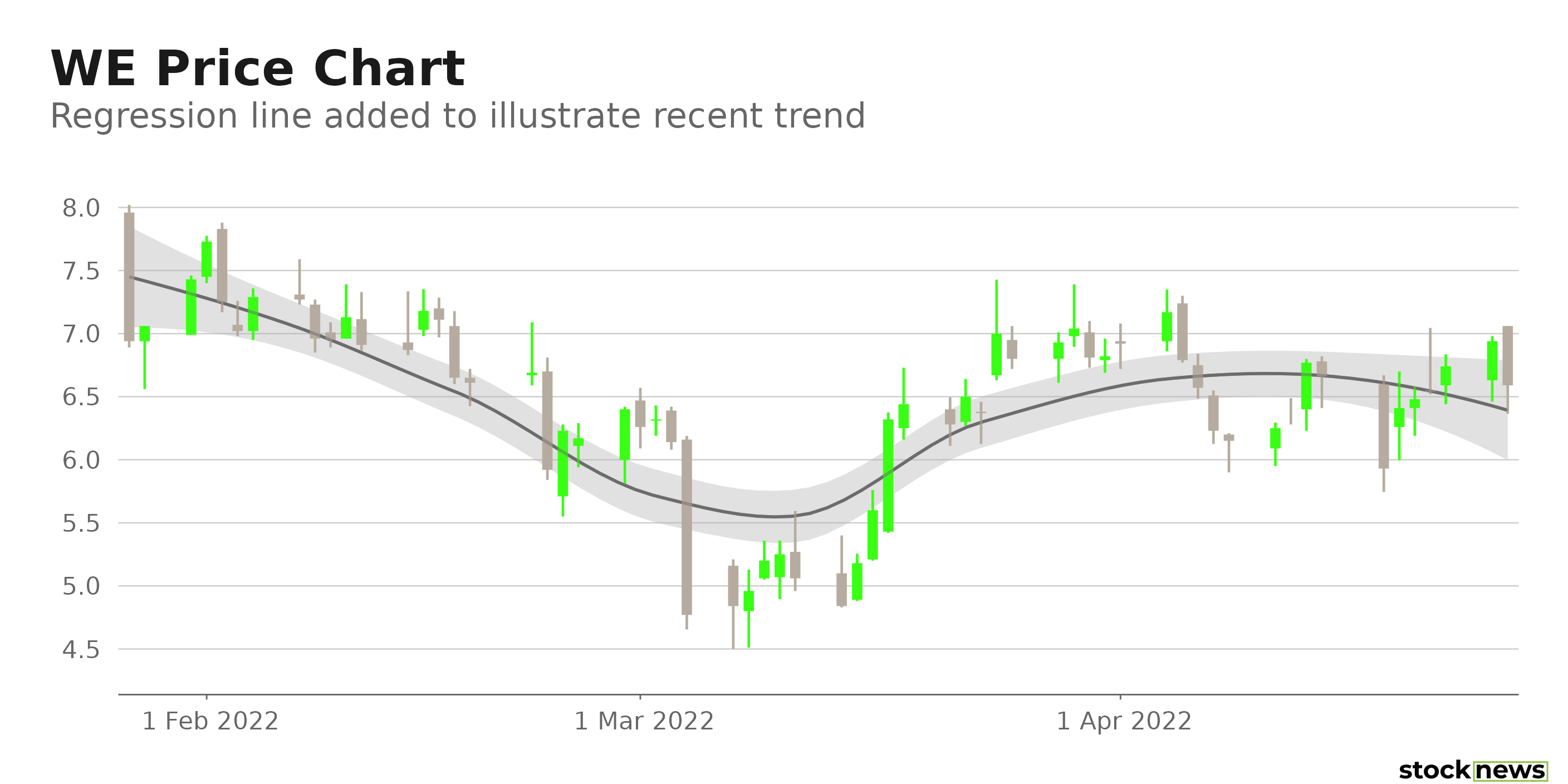 Here is what could shape WE's performance in the near term:

The company has $21.71 billion in total debt, while its net debt is $20.79 billion. Its total cash stood at $923.73 million. Furthermore, its insufficient cash inflows raise concerns regarding its debt repayment capacity. Its trailing-12-month net operating cash flow came in at a negative $1.91 billion, and its trailing-12-month levered free cash flow stood at a negative $1.33 billion, resulting in a negative 17.38 debt/free cash flow ratio. Also, WE's quick ratio stands at 0.57, questioning its ability to pay its liabilities.

WE has an overall F rating, which translates to Strong Sell in our proprietary POWR Ratings system. The POWR Ratings are calculated by considering 118 distinct factors, with each factor weighted to an optimal degree.

The stock has an F grade for Quality, which is consistent with its negative profit margins.

WE has a D grade for Sentiment, in sync with analysts' expectations of negative EPS at least until this year.

Among the 45 stocks in the D-rated Real Estate Services industry, WE is ranked the last.

Beyond what I have stated above, you can also view WE's grades for Stability, Growth, Momentum, and Value here.

WE has been expanding its operations and entering strategic partnerships to boost its business. However, the company has yet to achieve profitability. And, considering its significant debt burden and insufficient cash flows, I think it could be wise to wait for some solid improvement in its business model before investing in the stock. Thus, it could be best to avoid WE for now.

How Does WeWork Inc. (WE) Stack Up Against its Peers?

While WE has an overall POWR Rating of F, one might want to consider investing in the following Real Estate Services stocks, Marcus & Millichap, Inc. (MMI) with an A (Strong Buy) rating, and The RMR Group Inc. (RMR) and City Developments Limited (CDEVY), with a B(Buy) rating.

The post Does WeWork Stock Deserve a Place in Your Portfolio? appeared first on StockNews.com