The shares of gaming company Skillz (SKLZ) have plummeted 80% in price this year, indicating investor pessimism. Also, analysts expect the company’s earnings to decrease. However, with the company improving...

By Subhasree Kar May 12, 2022
This story originally appeared on StockNews

The shares of gaming company Skillz (SKLZ) have plummeted 80% in price this year, indicating investor pessimism. Also, analysts expect the company’s earnings to decrease. However, with the company improving its user acquisition marketing efficiency, will it be able to return to profit soon? Keep reading to learn our view.

San Francisco-based mobile games platform operator Skillz Inc. (SKLZ) connects players for fun and meaningful competition. The company primarily develops and supports a proprietary online-hosted technology platform that enables independent game developers to host tournaments and provide competitive gaming activity to end-users worldwide. The company reported a 22% year-over-year increase in its paying monthly active users to 0.57 million in the first quarter of 2022. This year, it also introduced its cloud gaming technology and has engaged in a meaningful partnership with UFC®, the world’s premier mixed martial arts organization, which should support SKLZ’s growth.

However, SKLZ’s shares have declined 89.8% in price over the past year and 87.7% over the past six months to close yesterday’s trading session at $1.49. The stock has slumped 80% year-to-date.

Earlier this year, analysts lowered their revenue and earnings per share estimates for the company as they factored in the latest outlook for the business. Analysts now forecast revenues of $399 million this year, marking a satisfactory 4% improvement versus the last year. But the latest estimates are significantly lower than the previously forecasted revenues of $549 million. Moreover, SKLZ's revenue growth is expected to slow, with the forecasted 4% annualized growth rate well below the historical 52% per annum growth over the last three years. Other companies in the industry, taken together, are expected to see revenue growth of 12% annually, suggesting that the wider industry is also expected to grow faster than SKLZ. In addition, the Street expects the company’s EPS to decline 69.5% year-over-year to negative $0.80 in its fiscal year ending Dec. 31, 2022. 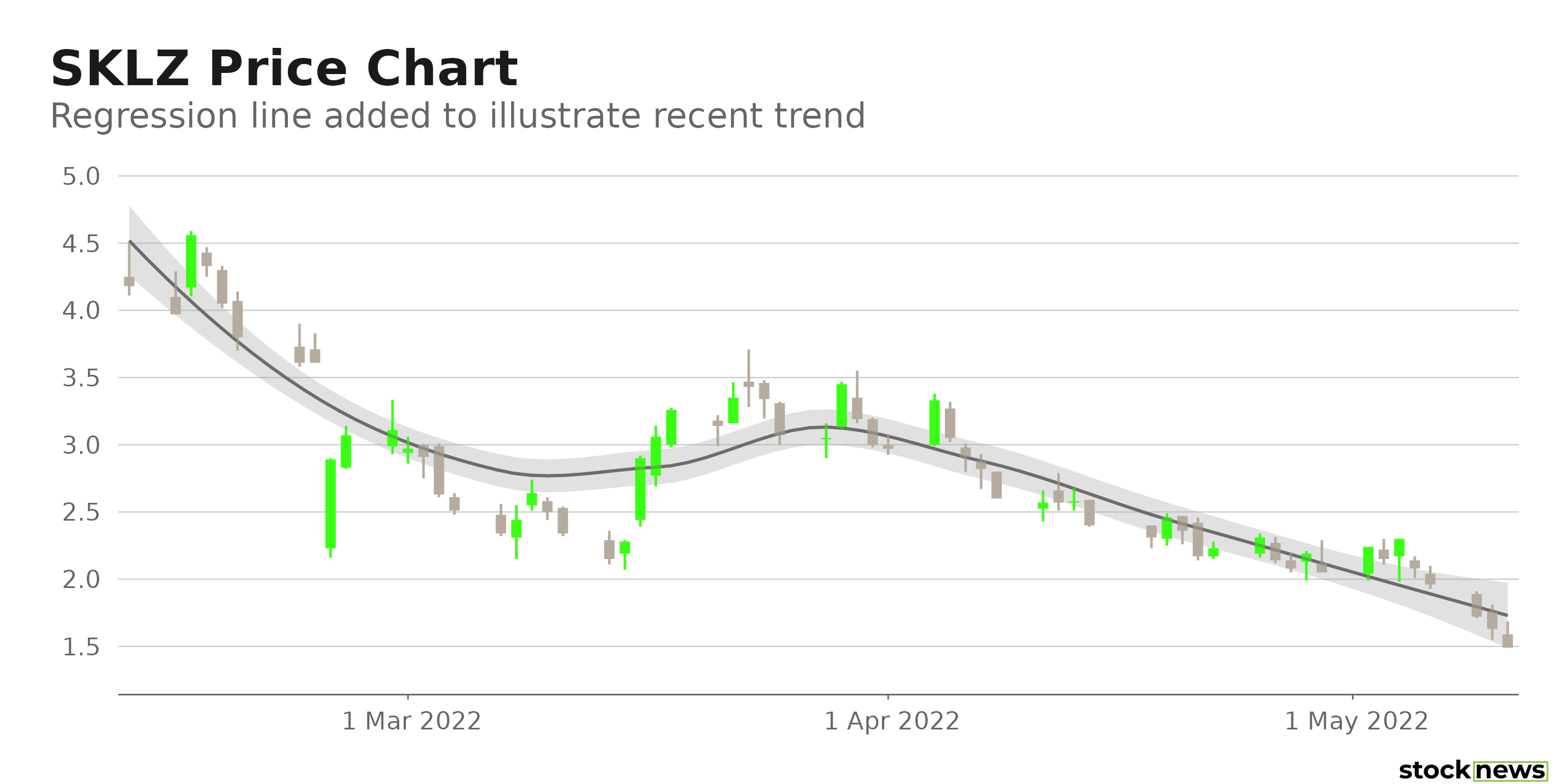 Here is what could shape SKLZ’s performance in the near term:

SKLZ has an overall D rating, which translates to Sell in our proprietary POWR Ratings system. The POWR Ratings are calculated by considering 118 distinct factors, with each factor weighted to an optimal degree.

The stock has an F grade for Stability, which is consistent with its1.81 beta.

SKLZ has a D grade for Quality, in sync with its negative profit margins.

Among the 23 stocks in the Entertainment - Toys & Video Games industry, SKLZ is ranked #21.

Beyond what I have stated above, one can also view SKLZ’s grades for Sentiment, Growth, Momentum, and Value here.

The company’s Revenue After Engagement Marketing (RAEM) increased by 8% over the prior-year period to $51.30 million in the first quarter, and SKLZ expects its RAEM to be $245 million this year, representing 24% year-over-year growth. However, its aggressive sales and marketing investments are eating up its profits. Also, its continued losses on its bottom line are concerning. Therefore, we think it may not be the right time to invest in the stock.

How Does Skillz Inc. (SKLZ) Stack Up Against its Peers?

While SKLZ has an overall POWR Rating of D, one might want to consider investing in the following Entertainment - Toys & Video Games stocks, Spin Master Corp. (SNMSF), which has an A (Strong Buy) rating, and Playtika Holding Corp. (PLTK) and DoubleDown Interactive Co., Ltd. (DDI) which have a B (Buy) rating.

The post Down 80% in 2022, Is Now a Good Time to Scoop Up Shares of Skillz? appeared first on StockNews.com