4 Things Investors Need to Know About the Debt Ceiling Crisis

Today's article features the SPY and reveals the "4 Things Investors Need to Know About the Debt Ceiling Crisis." Continue reading for all the details...

By Adam Galas
September 29, 2021
This story originally appeared on StockNews

Today's article features the SPY and reveals the "4 Things Investors Need to Know About the Debt Ceiling Crisis." Continue reading for all the details.

With the market 28% historically overvalued, investors have been increasingly nervous about a major market sell-off, like we saw in December 2018 or March 2020. 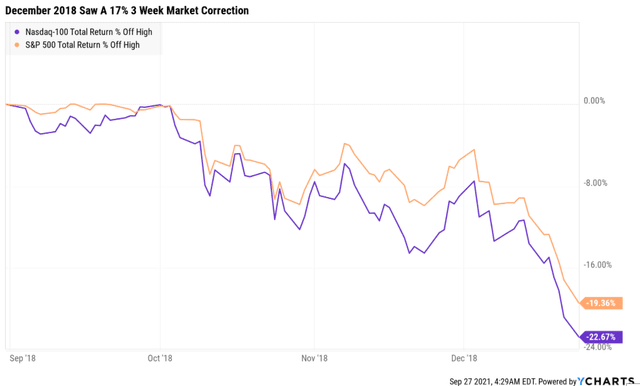 Corrections are perfectly normal, healthy, and to be celebrated, not feared. 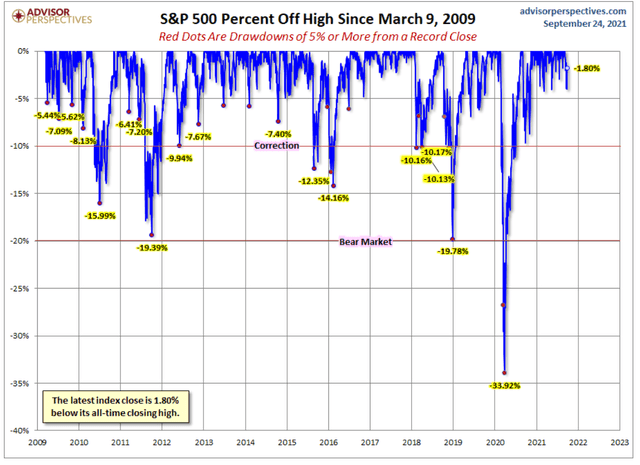 Anything can cause a correction, which historically happens every year to 18 months.

Today there are nine risk factors that could trigger the next correction but by far the most significant is the escalating debt ceiling crisis.

Goldman Sachs economists wrote in a note last week that the current standoff is "the riskiest debt-limit deadline in a decade." - Reuters

So let's take a look at the four most important facts about the debt ceiling, and why it might cause a sharp December 2018 style correction in the coming two to four weeks, how you can protect yourself, and even profit from the next scary market slide.

Fact 1: What Is The Debt Ceiling

The debt ceiling was created by Congress in 1917 to help fight WWI. Before then Congress had to authorize all borrowing from the US treasury and this created an unmanageable amount of paperwork as the nation matured and the government's role in our economy became more complex.

Initially, the debt ceiling was set at an arbitrary $1 billion, which was more than twice the spending in 1916.

Since 1960 the debt ceiling has been raised or suspended 78 times, basically once per year, including seven times since 2013. 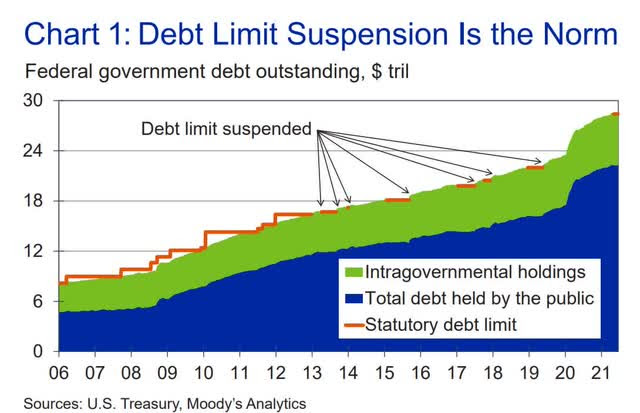 It's important to know that the debt ceiling does NOT authorize new spending, but merely authorizes the US treasury to sell bonds to pay for things Congress has already voted for.

For example, in the last four years, nearly $8 trillion in spending was approved by Congress, almost all of it pandemic relief. The spending has been done, and now it's time to actually pay the bills, and that's what the debt ceiling allows.

Before 2011 the debt ceiling was raised almost every year in a technocratic bi-partisan fashion with very little controversy.

Since 2011 it has become a political hot potato and both parties are trying to use it to their benefit in the 2022 election.

The debt limit fight has become part of an ongoing struggle between the parties to shape public perceptions of President Joe Biden's agenda heading into next year's congressional election." - Bloomberg

What's unique this time is that Senate Minority leader Mitch McConnel is not trying to extract anything from the Democrats who control Congress or the White House.

Minority Leader McConnell says it's purely up to the Democrats to raise the ceiling and avoid catastrophe.

There is no precedent for such a take, which is creating a major concern over both a potential government shutdown starting October 1st and a potential default a few weeks later.

The House recently passed a combined bill that does two things. First, it suspends the debt ceiling until after the 2022 mid-term elections.

It also provides disaster relief for hurricane victims, victims of the Afghan war, and extends current government spending through December 3rd, averting a government shutdown that begins at midnight on Friday, October 1st.

Republicans have said they are willing to allow to vote to end the filibuster on a spending bill that prevents a government shutdown, but under no circumstances will vote for an increase in the debt ceiling.

This means that most likely the Democrats will need to pass another bill in the House, without a debt ceiling increase.

That leaves just one option for averting the first default in US history.

Another option would be to write a reconciliation bill focused on just the debt ceiling. That's also time-consuming as bills trigger a much-despised process called a "vote-a-rama" with the potential for hundreds of amendments. The Senate has held multiple all-night sessions of that kind over the past year.

A stand-alone debt ceiling increase using the reconciliation process likely would have to be approved by the Senate parliamentarian since there are tight controls on its use." - Reuters'

Reconciliation is an option and it looks like that is the most likely course Congress will take. However, Vote-a-ramas, potentially two of them could slow down the process enough to make default unavoidable.

On Wednesday, the chairman of the House Budget Committee insisted that the procedural obstacles and time constraints would prevent the party from using the budget process to raise the debt ceiling in time to avoid a default, a bid aimed at pressuring top Republicans to agree to suspend the nation's borrowing limit in a bipartisan vote." - CNN

Currently, the House has not yet begun the reconciliation process on a debt ceiling increase and time is fast running short to prevent the most unnecessary and stupid recession in history.

In the event that the Senate Parliamentarian were to rule that the debt ceiling can't be raised via this process (highly unlikely) Vice President Harris has the legal authority to overrule Elizabeth MacDonough, who currently serves in that capacity.

In part two of this series, we'll take a look at why the debt ceiling is the single biggest threat to the economy and stock market, and could even trigger another Great Recession and a $15 trillion stock market crash.

Adam has spent years as a writer for The Motley Fool, Simply Safe Dividends, Seeking Alpha, and Dividend Sensei. His goal is to help people learn how to harness the power of dividend growth investing. Learn more about Adam's background, along with links to his most recent articles.

The post 4 Things Investors Need to Know About the Debt Ceiling Crisis appeared first on StockNews.com