Should You Offer Employees an Online Doctor Option?

Eighteen percent of large employers now offer telemedicine as part of their coverage. Here are the pros and cons.

Lindsay Molina had a lot to do before the holidays last December when she found herself coming down with an infection.

"I just needed to see a doctor and get what I needed to get taken care of so I could move on with my life," said the busy mom who works at Marvell Technology in Santa Clara, California.

Instead of taking the morning off, she took her computer into a conference room and logged on to talk to a doctor online.

"She was able to treat me, and then on my way home, I picked up a prescription that she sent to my pharmacy," Molina said.

Her company, Marvell Technology began offering WellPoint's LiveHealth Online service to its staff last fall. Yet, even in the heart of Silicon Valley, it has been a tough sell at the semiconductor firm.

"We've had a slow uptake in convincing people to use the service, I think, because it's such a new idea," explained Margaret Shaw, Marvell's director of global benefits.

Related: Why your job dictates your health insurance cost

The chipmaker hopes the $49 online visits catch on because it could help cut down on the cost of routine care, while also saving employees time.

"It could potentially be a huge cost savings," Shaw explained. "If you go see a regular doctor, your cost is anywhere from $150 to $200 for an office visit. It's a big, big difference." 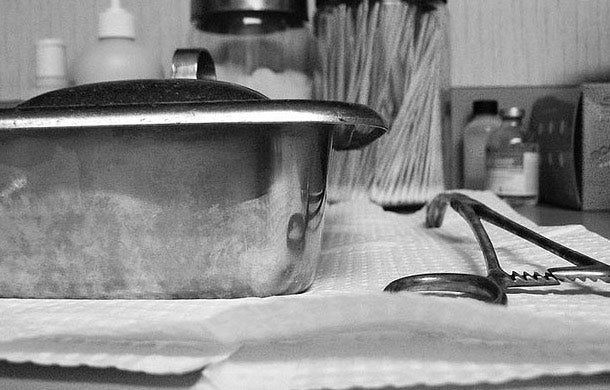 Eighteen percent of large employers now offer telemedicine as part of their coverage, up from 15 percent in 2012, according to benefits firm Mercer, a division of Marsh & McLennan.

WellPoint sees room for much more growth, which is why the insurer partnered with Boston health IT firm American Well to launch LiveHealth this year for employer group plans.

"It often can replace an emergency room, urgent care or retail clinic visit, which purely from a price standpoint, are higher," said John Jesser, WellPoint vice president and general manager of LiveHealth Online.

The insurer plans to make an even bigger bet on the technology with a LiveHealth virtual worksite clinic—a private booth with tools to measure pulse and blood pressure, and even a camera that allows a doctor to look at a patient's skin problem in real time—all at a fraction of the cost of having a doctor or nurse physically on site.

"We think that it's a differentiator that your health plan is also integrated with this," said Jesser, especially as more Americans are now buying plans on the individual market in the age of Obamacare.

WellPoint makes the service available to anyone with or without insurance for the same $49 price it offers employers, and it plans to offer it as part of its Affordable Care Act exchange plans in the year ahead.

Jason Gorevic, CEO of Teladoc, said he welcomes the competition from health-care heavyweights. Just five years ago, Gorevic still had to make the case for online medicine's underlying value.

"People wondered whether this was real medicine," Gorevic said. "It really legitimizes and makes people more comfortable that this is a really important part of the delivery system."

With corporate clients that include Home Depot, T-Mobile and CALPERS, the California Public Employees Retirement System, privately held Teladoc is currently the leader in online doctor consultations. Founded in 2002, its partners include Aetna and New York-based insurer Oscar, which has made free online doctor visits a key feature of its plans.

Yet even as employers and insurers are embracing the technology for its savings potential, state and federal regulators have been slow to approve reimbursement rules.

"The big barrier in health care, as is often the case, is the payment system … it's very difficult to figure out ways to pay for innovation," said Ceci Connolly, director of PwC's Health Research Institute.

The American Medical Association and other health-care heavyweights are lobbying state and federal officials to get on board, to pay for access to the technology for patients on Medicare and Medicaid.

"I think over the next year or two, we will see a complete overhaul of the definition of telemedicine, the reimbursement of telemedicine, and that will open up a whole other opportunity for companies," said Gorevic.

Of course, there's still the hurdle of winning over users to the technology. If Silicon Valley tech workers are a tough sell, imagine tech-leery elderly patients.

At the end of the day, price and convenience will win out, said Marvell's Molina.

"You've just gotta do it once, and then you get the concept," she said.