Why 'Assistant-As-App' Might Be the Next Big Tech Trend

By Nir Eyal
July 9, 2015
This story originally appeared on NirAndFar.com

Whenever I feel uncomfortable writing about a topic, that's when I know I should write about it. So here goes. This article is about how a new way of designing apps changed my life. But to explain the power of this trend, I need to tell you about poop. That's the uncomfortable part.

For the past five years or so, I've struggled with intestinal discomfort. (I'll spare you the gory details.) I spent countless hours crawling the web searching for a possible diagnosis and tried dozens of different remedies and diets. Nothing seemed to help.

Finally, I saw a gastroenterologist. He listened for all of five minutes while I described my symptoms and quickly jotted down a prescription for antibiotics. They worked for a while but soon the symptoms returned. I went back to the doc. A few tests were done and more antibiotics were dolled out. But the problems came back. Then again. And again.

After a few cycles, I could see he was running me through a gambit of various gut bug killers until my symptoms stopped or he was out of drugs. I decided I'd rather live with the problem (whatever it was) and hope for the best.

Recently however, a chance encounter with a total stranger led me to start using a new kind of app that does things my physician and the specialist never could.

This app helped me get to the bottom of my problem. I'll explain how later but what makes the design of this app important has implications in all sorts of industries, including outside health care. At its core, the app facilitates a conversation to solve a complex problem with greater ease than ever before.

Over the next few years, smart entrepreneurs and savvy designers will use similar techniques to dramatically improve the way they connect and serve their customers.

App makers are returning to the roots of what our phones are for. They are after all communications devices. So called "invisible apps" engaging in "conversational commerce" are popping-up in all sorts of unrelated industries.

For example, a few weeks ago, my friend Stephen and I chatted at the park while we watched our kids play. As Silicon Valley tech geeks do, we got to talking apps. "Have you started using any good apps lately?" he asked. "Actually, yes." I said. "Have you heard of Native?" I don't usually recommend apps, but Native is special.

What is Native? It's a virtual travel agent. If you're not impressed, neither was I the first time I heard the idea. But when I started using the service, I realized they were onto something.

Here's how Native works: every time I need to do anything related to travel, I just ask Tim to handle it. Tim lives inside Native and while he appears to be a human, I'm not 100% sure he is. For all I know he may be a bot, artificial intelligence, or any number of people working behind the scenes under the persona of the fresh-faced Tim. To be honest, I don't much care. Every time I need him he's there, ready to assist me.

For example, I recently had to book a gnarly itinerary in and out of two countries using various airline loyalty points. Normally, booking this sort of trip would have taken me hours of comparing prices, flight times, connection difficulty, and frequent flyer point requirements. Instead, I just opened the app and told Tim what I needed in plain English — like sending a text message. Then, I went about my day and an hour later I received a notification from Tim telling me he found the best two options. Would I like itinerary A or itinerary B? I picked one and he booked the flight. Done!

I didn't have to use any dropdown menus, sift through hundreds of options, or spend half an hour attempting to pay for my ticket only to learn that the price I wanted was suddenly not available. Nope! I left it up to Tim to handle everything. 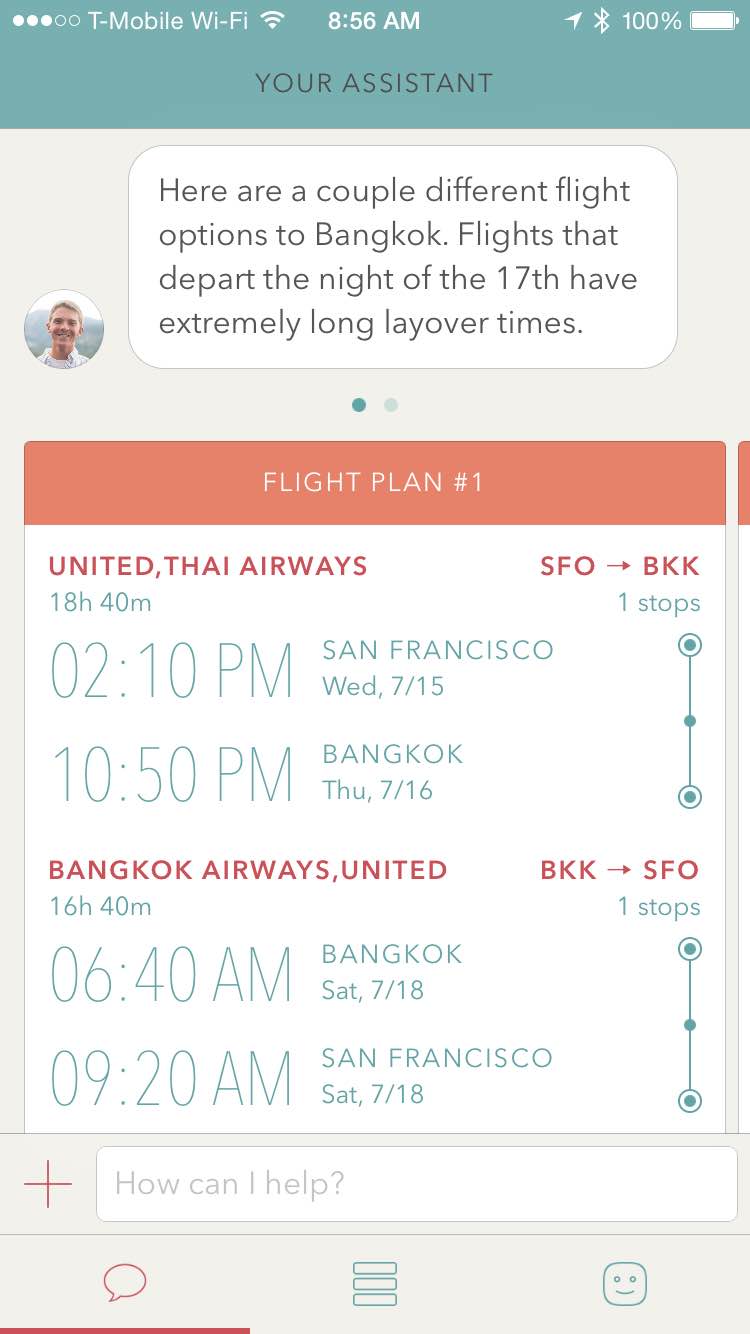 Native charges $25 per month. Considering that Tim can complete any and all travel-related requests — from booking me on another flight if I miss a connector to calling the airline to request a seat change — it is well worth the money. Of course, whether Native can actually make money with this business model is an open question.

As I described Native to my friend Stephen, a woman pushing her child on the swing next to us interjected. "Excuse me," she asked, "What app are you talking about?" I showed her Native on my phone. "Funny," she said "my company does the exact same thing but for health."

Related: 4 Ways to Use Psychology to Win Your Competition's Customers

The woman, I would come to learn, was Stephanie Tilenius, CEO of Vida Health. As she explained her app, Stephanie told me "Vida is great for irritable bowel syndrome if you happen to know anyone with that."

I told her I'd be interested in giving her app a try. "We'll connect you with a coach to help you figure out what's going on," she said, and by the time I left the park I had received an invitation to use the service.

Diagnosing a digestive problem is fiendishly difficult. It requires looking back through a detailed log to find what might be causing symptoms that don't manifest until the food has time to work it's way through the body a day or so later. Finding a solution involves not only understanding what I ate that might be causing the symptoms, but also what I did not eat that I should have. I had done this sort of detailed record keeping before on my own but it was incredibly time consuming and I always gave up after a few days.

I started using Vida. Over the next several weeks, I shared what I ate and how I was feeling with my coach Mindy who, like Tim from Native, was a helpful face on the other side of the app. Like Native, there was no complicated interface to learn. The app felt more like messaging with a friend than diagnosing a health problem.

Along with helpful suggestions, Mindy sent me regular reminders to send her snapshots of what I was eating. She also requested I text a number from 1 to 10 to quantify my symptoms — my "poo score," we called it. 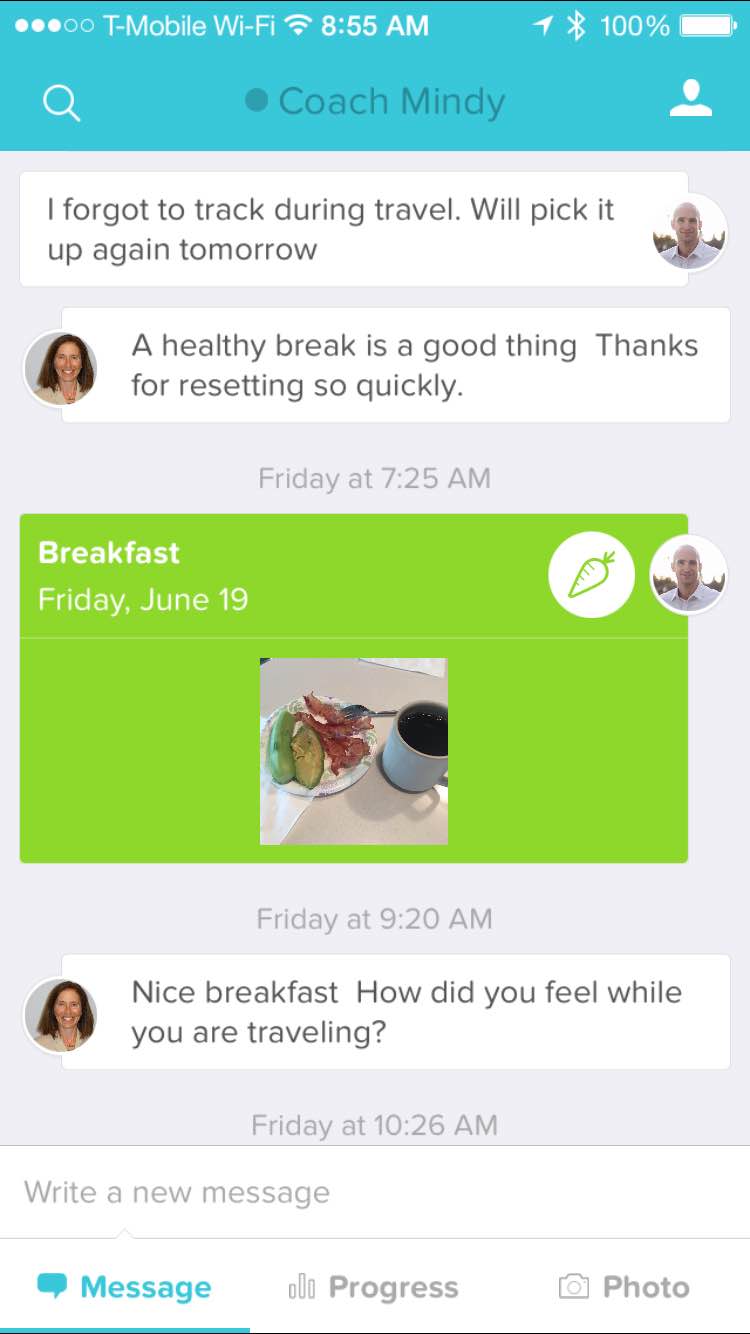 Mindy started analyzing my diet in ways neither my doctor nor I ever could. She looked at the nutritional content of what I was eating and searched for correlations with how I felt. Like a detective, she was on the hunt for the intestinal who-done-it. She started eliminating suspects from the food line-up and narrowing in on what might be triggering my symptoms by looking for clues in my diet. She told me what I should eat instead and after changing my diet, I'm feeling better.

Mindy's ability to diagnose the source of my problem was something my physician just didn't have the time or ability to address. Without a way to carefully monitor and analyze what was going in and coming out of my body, how could he? Conversational apps like Vida however are designed to always be accessible; allowing users to send the kind of information a professional can use to provide more insights in less time.

Similarly, Native's highly trained travel agent on the other side of the conversation allows the app to provide just the right itinerary, eliminating all the hours spent sorting and culling travel options I previously had to do myself.

This trend is bigger than travel and diet apps. The fact that these two very different services both use what I call an "assistant-as-app" to help users accomplish complex tasks, makes me think there's more to this trend.

Related: 5 Questions to Ask Before Developing a Mobile App