Want a free burrito plus the chance to win free Chipotle for a year? Read on.

From July 21 until the end of August, Chipotle is giving out buy one, get one free coupons for a free entrée. All customers have to do is go to Chipotle's "Friend or Faux?" website and play an interactive game. 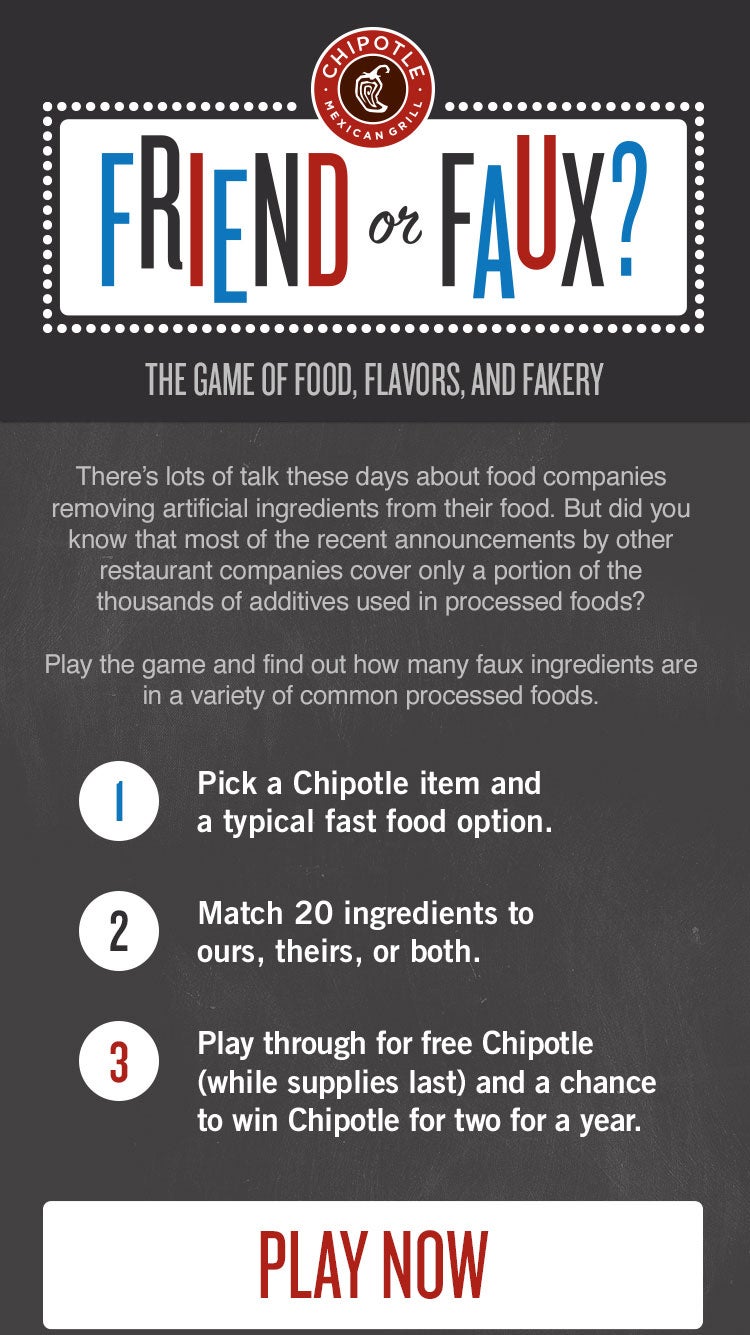 The rules of "Friend or Faux"
Image Credit: Chipotle

If one free burrito isn't enough, Chipotle is also offering the ultimate prize for 50 lucky players. Fifty participants will win free Chipotle for themselves and a friend for a full year, in the form of a set of 52 gift cards awarding free Chipotle dinners for two. One hundred more participants will receive a catered Chipotle party for 20 friends.

Those hoping to win a magical year of free burritos can help their chances by tweeting about "Friend of Faux" once the online game goes live. Completing the game leads to one entry in the sweepstakes, while sharing on Twitter or Facebook means an additional entry in the lottery for free Chipotle.

To play "Friend or Faux," participants pick one Chipotle menu item and one fast-food menu item, including "burgers, burritos, tacos, sandwiches, salads and pizzas available from a number of common fast food brands." Then, players are presented with a list of 20 ingredients. Participants identify which menu item contains each ingredient – Chipotle, the fast-food chain, or both. 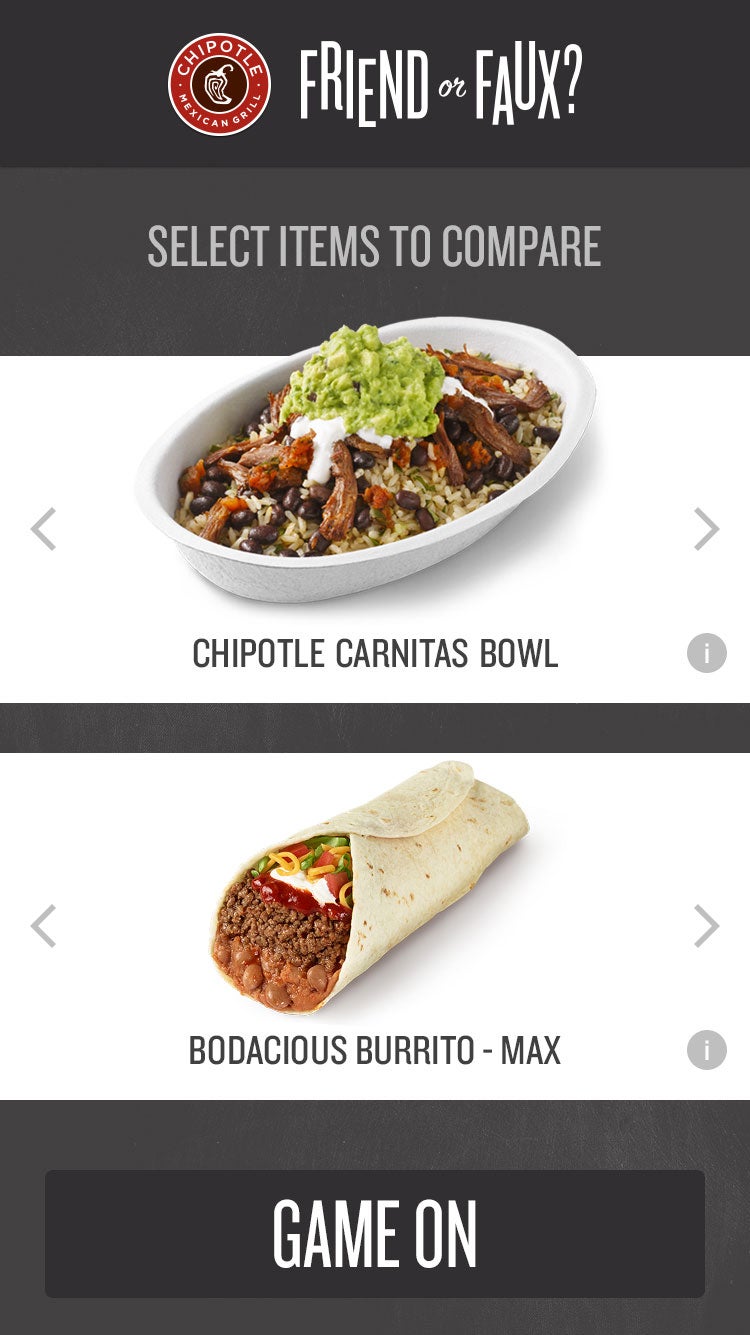 Presumably, the Chipotle item will contain fewer ingredients, especially additives and preservatives, as the campaign is intended to highlight the fact that the chain's menu requires just 68 ingredients in total. Chipotle, which went GMO-free in April, is currently testing a simplified, all-natural tortilla that would take many of the remaining preservatives off the chain's menu.

Chipotle says it will not feature specific fast-food chains on the site, instead comparing its offerings to that of "traditional fast food." However, the site currently features a passive aggressive jab at fast-food and fast-casual chains such as Papa John's, Subway and Taco Bell in the process of removing additives.

"There's a lot of talk these days about food companies removing artificial ingredients from their food," reads the website. "But did you know that most of the recent announcements by other restaurant companies cover only a portion of the thousands of additives used in processed foods?"

If you were seeking further education on this matter (or if you just want a free burrito), check out the game of "food, flavors and fakery" next Tuesday. 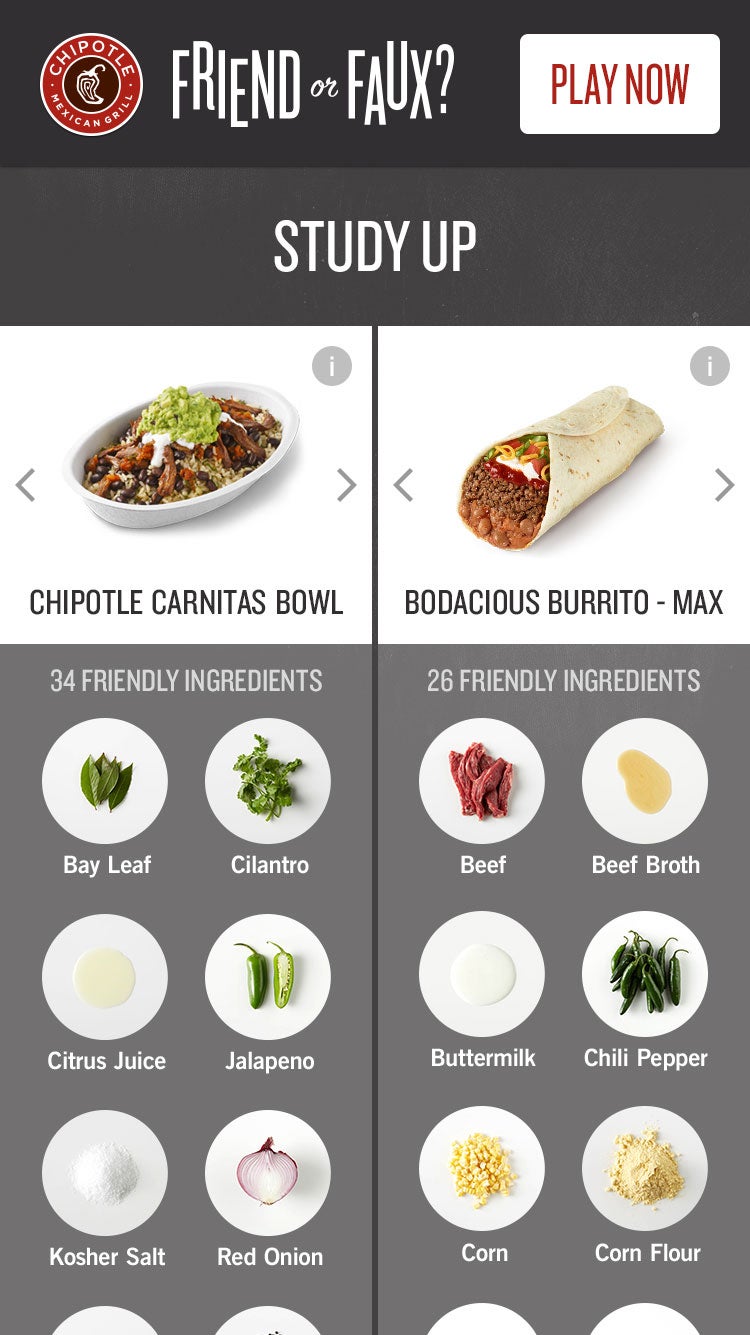 Related: 7 Major Restaurants That Are Getting Rid of Artificial Ingredients