Jim Cleaves loves coffee, though he spits most of it out. When you taste an average of 200 cups a day, swallowing every sip simply isn't an option.

Cleaves is the coffee excellence manager at Dunkin' Brands, parent company of Dunkin' Donuts. He began his career in the 1970s working at a specialty coffee roastery. Since then, he has become a licensed Q grader (the coffee world's equivalent of a master sommelier), judged the prestigious Cup of Excellence award and worked with both unique roasteries and enormous coffee companies. Cleaves joined Dunkin' more than a decade ago, tasked with using his uber-developed palate to maintain the chain's coffee quality.

Dunkin' doesn't market itself as a boutique coffee shop. However, as an 11,000-location chain with 65 years in the coffee business, any misstep in the quality of its brew can seriously burn its brand. That's why Cleaves is there.

To ensure quality control, Cleaves relies on a skill called "cupping" which involves smelling and tasting a coffee to assess its aroma and flavor. Before that can happen, the coffee needs to be produced; Dunkin' sources coffee harvested in Central and South America, which is processed, dried, cleaned and classified, sorted into huge sacks of green, unroasted coffee beans. Then, the beans are roasted and cupped by Cleaves and the rest of the coffee excellence team before being shipped off for use in Dunkin' Donuts locations and packaged coffee around the world. 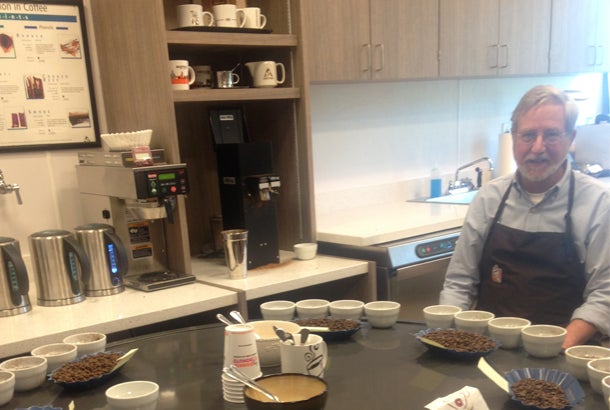 Watching Cleaves cupping coffee is akin to watching a master sommelier at a wine tasting. First, he deeply inhales from 32 cups of eight different types of dry coffee grounds set on a swiveling table that functions as an enormous lazy susan. The coffees he is trying this morning at the company's Canton, Mass., headquarters include both components of Dunkin' blends and expensive specialty coffees he samples to keep abreast of industry trends. Some he deems "earthy," while other are fruitier. Dunkin' executive chef Jeff Miller, who cups coffee with Cleaves about once a week, describes one as "mushroom-y."

Those skilled in cupping, like Cleaves, will be able to determine if something is wrong with the coffee simply by the smell. The process of deeply inhaling the coffee is repeated after hot water is added to the cups. Then, finally, it's time to drink.

"That's the polite way to do this," Cleaves says, indicating towards Miller delicately skimming the grains from the surface with two spoons. "This is how we really do it," he says, expertly blowing the grounds to the edge of the cup, then scooping them up with his spoon in one swift motion. He spins the table, and repeats the process.

"It doesn't taste like any one of them," he says, and he's right. A good blend can take the richness of one coffee, the boldness of another, and the sweetness of a third, and become greater than the sum of its parts, often for less money. This is a hastily composed take on Dunkin's Original Blend -- the best-selling beverage on Dunkin's menu and the drink that Dunkin' executives believe keeps bringing brand loyalists back for more. Typically, Dunkin' creates the blends prior to roasting, but knowing the individual elements is key for the coffee excellence team when deciding the proportions for the perfect blend.

Cleaves crafts the Dunkin' Original blend, and other, newer blends like the Dunkin' Dark Roast based on "character" as opposed to an exact science. Instead of setting strict percentages, Cleaves will determine which sources are currently producing the most, highest-quality beans at that moment in time and balances these flavors against each other. After he approves a blend, the coffee often still goes through more tests internally and externally. Then, there's testing new cappuccinos, lattes, espressos and a wide array of flavors; Dunkin' claims to be the world's largest retailer of flavored coffees.

While Cleaves is focused on making sure Dunkin's coffee quality is up to par, most of the team seems to have their fingers in countless different pies. Executive chef Jeff Miller oversees the 24-person team responsible for crafting and maintaining the food and drink menus at Dunkin' Donuts and Baskin-Robbins chains worldwide. The work of these two dozen individuals shapes the menus of more than 18,500 locations worldwide, from Southern California to China. 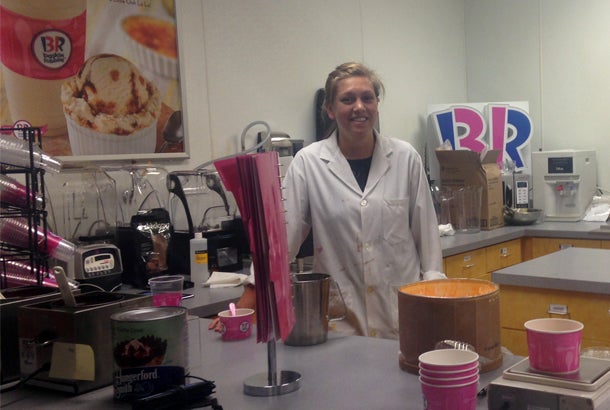 Walking through the Dunkin' test kitchen feels like Willy Wonka's chocolate factory located in a mouse maze: a tangle of testing areas dedicated to everything from Baskin-Robbins ice cream flavors to new coffee flavor twists filled with familiar smells and unfamiliar products that aren't yet on the menu.

"Our team is a collection of food professionals from across the board; chefs, food scientist, pastry chefs, coffee experts who have the common bond of a hyper-curiosity for food, flavor, and food experiences," says Miller. "What inspires us is the challenge of interpreting food trends in a way that resonates with our guests." 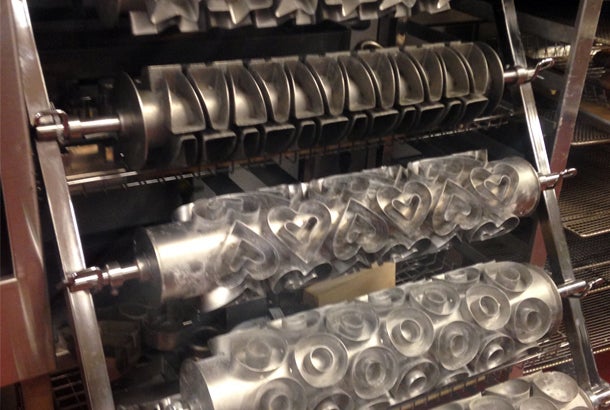 When creating new items, a process which usually take about a year of test prior to a national launch, Miller emphasizes a communal culinary process. If Dunkin' Donuts is working on a new dairy-focused product, someone who typically works with Baskin-Robbins ice cream will likely help out. All team members are required to dedicate a portion of their time to international offerings, such as pork-topped doughnuts in China, making the business "not international, but worldwide," according to Miller. Miller further encourages this interactive process through a policy that allots 10 percent of employees' time towards innovation in any culinary area, an initiative that has yielded products such as the Croissant Donut.

Still, while the culinary crew is constantly at work crafting and testing new menu items, Dunkin's Original Blend coffee and doughnuts are still its biggest growth drivers. Dunkin' Brands president of global marketing and innovation John Costello says the company's most important day part -- breakfast -- can take on a ritual quality as people eat the same items day after day.

Those rituals are also a matter of loyalty. Research consultancy Brand Keys has ranked Dunkin' No. 1 in customer loyalty in the coffee shop category for nine years in a row (this year tied with Starbucks), as well as No. 1 in packaged coffee. As anecdotal evidence, when the company opened its first location in Southern California, eager fans (many of them New England transplants who form the backbone of the chain's fan base) began lining up 37 hours before the shop opened its doors. The company's DD Perks loyalty program, launched last January, has more than 2.5 million members.

These customers are the reason why Jim Cleaves's job is so important. Customers with decades of history aren't going to accept a cup of coffee that tastes slightly off due to a drought in Colombia or a late harvest in Brazil. So, Cleaves keeps on cupping to make sure that wherever customers shop, the Dunkin' Original Brand will remain the same as ever.