By Stephen Key
February 20, 2015
Opinions expressed by Entrepreneur contributors are their own.

For about six or so years, I hawked goods I had made on the street, at state fairs, county fairs, art fairs and festivals up and down the state of California.

It was the late 1970s. I was 21 years old. I had dropped out of college at San Jose State University, needing only three units to graduate. I had loved studying sculpture, but I was dubious, to put it mildly, about my employment prospects. Who was going to hire me?

Related: How I Won My First Big Customer

When I looked in the paper, the only jobs were for graphic artists and art galleries -- neither of which I was qualified for. I knew I would not be creating fine works of art, but I decided then that if I could make things with my hands and make a living -- I'd be satisfied. I'd be more than satisfied: I'd be rich.

At the time I was living in the Santa Cruz Mountains with a ragtag group of friends. There was a lot of kicking back and hanging out. I was fortunate to cross paths with someone who was extremely creative. As we sat in front of the television watching Dallas ( Dallas was always on), I remember watching Marlena make little funny-looking characters out of stuffing a nylon stocking with cotton using a needle and thread. With their wrinkly faces, they looked like little old men.

It seemed fun, so I started to design a few of my own. When some of our friends told us they thought they were cool, an idea dawned on me -- could I sell these?

Driving home on Summit Road one day, I noticed a sign advertising an upcoming craft fair at a local elementary school. I took down the phone number, called it, showed up the following weekend with my folding table and soft sculptures, and had an absolute blast. I felt like I had met a community of like-minded people. They didn't have jobs either. They weren't mainstream. They caravanned across the state like gypsies, and that appealed to me. What freedom! As I felt the warm sun on my face, I was sure of it: This was the life for me.

There weren't many vendors, but I could see that some booths were doing a lot of business, because every so often a wad of cash would peak out from someone's hand. They'd figured out that magical sweet spot, the one that exists when you sell something for the right price point in the right place. You can make it as complicated as you want, but if you've made something, brought it to market, and someone has paid you for it, you've completed the circle. You've done what every major business does. I wanted to duplicate their success.

Later that afternoon, my father stopped by the show to see how I was doing. "Great!" He saw how wide my grin was and asked me how many things had I sold.

Zero. I hadn't sold anything.

To his credit, and this really was not his scene, he didn't say or do anything that might have put out my fire. He simply smiled in a way that said, "You'll figure it out."

Related: How to Develop and Evaluate Your Startup's Value Proposition

I learned a very important lesson that day. If I was going to make rent and feed myself, I had to come up with ideas that would sell. It wasn't enough that I loved my creations and thought they were clever. I started thinking, "Who is my audience?"

So I went back to the drawing board to examine why I had failed. The nylons I had used were very plain -- you could even see the cotton through them. The characters weren't very recognizable either. When I reflected on the day, I remembered seeing mostly women, and that the fruit and vegetable stands were a big hit. fruits. Vegetables. Women. I came to the conclusion that I needed to invent something that was fun, whimsical and for the kitchen.

So I changed directions. I bought colored nylons and formed them into playful fruits and vegetables. I called the tomato "Mr. Tom-a-toe." The banana's face peaked out of its peel. There were peas in a pod, each of their three faces silly and cheery. My carrots had shaggy green "hair" that I cut to look like the Beatles.

The next time I set up my table, I smoothed out a red and white checkered tablecloth on top of it. I staged my creations inside a wooden crate. And I waited.

That day, I sold out. 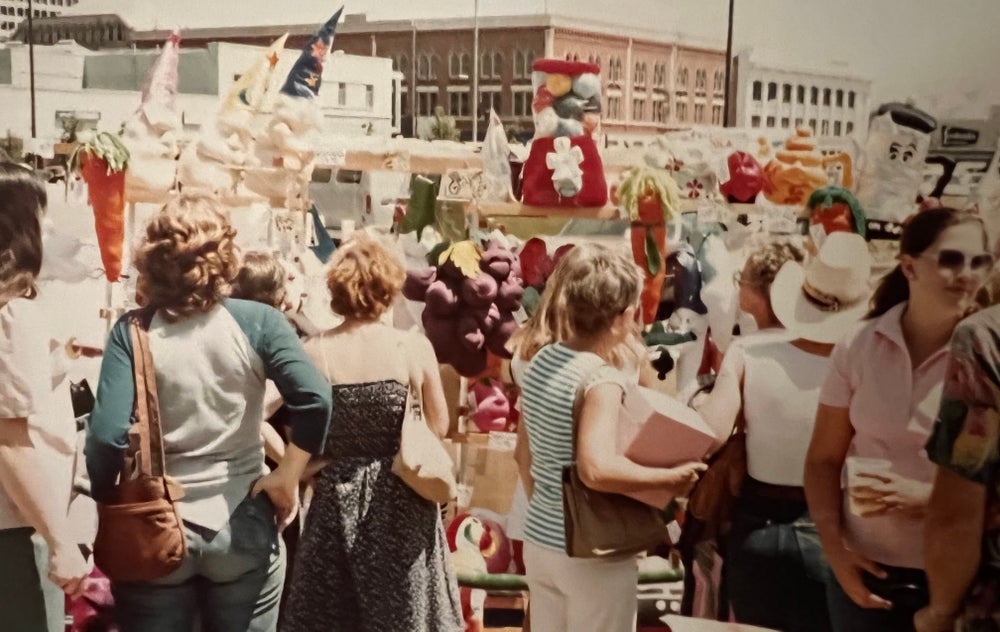 Immediately I thought (like every entrepreneur who has ever lived), how do I duplicate this? How do I scale up? I've been trying to do just that ever since.

So what did I learn? Know your audience. Create something they desire. Test it quickly to see if it sells. And by all means, have fun doing it. For me, these lessons are as foundational today as they were then. How could they not be? The path was as plain as day. When I sit in boardrooms with major corporations, I ask myself the same questions. Who is my audience? And how am I going to get them to open their wallets?

You can learn so much from observing successful operations. And I think there's something to be said for having your back up against the wall. It actually works in your favor. If you have to support yourself, you get darn creative -- fast.

Related: The Long Game: 6 Prerequisites for a Killer Product That Lasts Forever

These Are the 9 Best Trader Joe's Products, According to Customers — Plus Why Some Former Winners No Longer Top the List